I haven't been blogging much, doesn't mean I haven't cooked, but it's because well my camera is busted still like doesn't work for sh#t, and I haven't made time to buy a new one :/ (anyone wanna mail me one for free hehe just kidding... well not really lol.)

Well I took my Dad's camera yesterday when I was making this very simple vegetable side dish. I wasn't sure to post it because it is so simple, but sometimes people want to know the simple things, or simply know them but never think about it. It's essentially Chayote, steamed in a pot with a little water, you can serve it with squeeze of lime and salt if your on a diet LOL. or if not with a couple pats of butter and some salt. For Cubans it would be best enjoyed with"Mojo de Ajo" (Cuban garlic sauce) but the other two ways mentioned would also be good. This can be a side to just about anything atleast it would fit into any Latin or Spanish meal as a vegetable side no matter the time of the day.

To those that don't know what "Chayote" is it is also known in english as "Alligator Pear", when raw it's texture is hard and crisp yet somewhat slippery? THe taste I can describe it as a cross between a cucumber and Italian or Mexican squash, I've never consumed it raw however. It can be peeled, the center core removed, cut into chunks or however and added to soups or stews. It can be sauteed on it's own,with meat, used in stir-fried, or steamed it is truly very very versatile.

Ingredients:
-3 large Chayotes
-water (enough to fill the pot about 1 inch or 2)

To serve once cooked:
-some butter and salt OR a squeeze of lime and salt OR Mojo de Ajo (Cuban Garlic Sauce) 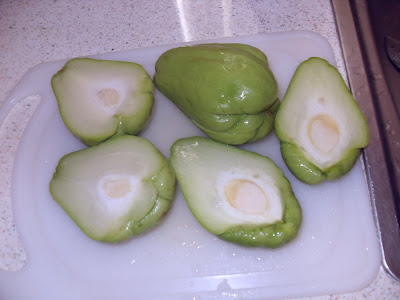 (2) Place in a pot with enough water to cover one inch, bring to a boil on high heat, cover, and lower heat to medium.
(3) Steam for 30 minutes until tender. 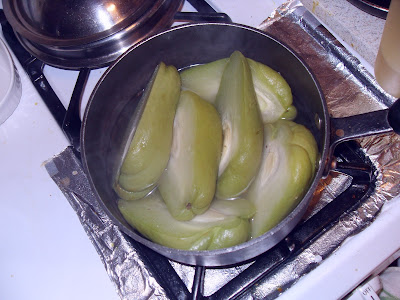 Here's 4 segments left, my mom was quick to grab some for herself before i was able to even take pictures hehe 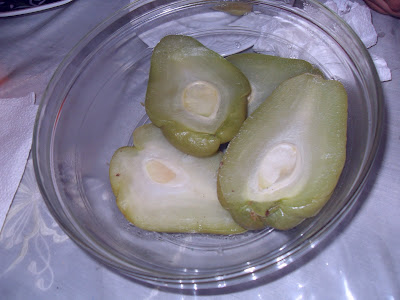 (4) Serve with a squeeze of lime and salt, or some butter and sprinkle or salt OR if your used to/ or love the pungent Cuban garlic sauce and don't mind the dragon breath feel free to smother it with "Mojo de Ajo" 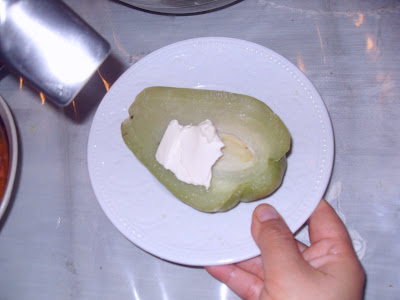 PLEASE NOTE... the Chayote you can remove the center core if you want, my mom likes to eat it so I leave it, because it will turn tender if cooked long enough, the skin of the chayote for this recipe I leave it on since after steaming a long time it also turns tender. However the front tip and back tip for sometimes will not turn tender and are often cut off after steaming, it's up to you :)

P.S.
I'm labeling this as both Mexican and Cuban because pretty much I've seen Cubans cook it and also Mexicans enjoy it. However serving certain steamed or boiled vegetables (usually root vegetables) with Mojo/ garlic sauce is a Cuban thing :)

If interested in other recipe check out my post for "Guiso de Chayote" (sauteed Chayote squash, I cooked it with pork)