Well I learned how to make the "Empanada Gallega" dough from Pilar Lechuza a Galician lady who is a great cook and has a blog dedicated to homestyle traditional Galician food called "La Cocina de Lechuza" it is all in Spanish but Im sure you can use some type of translator. She has many great recipes and especially a great "Empanada" maker.

Now aside from that let me tell you I've been wanting to learn the Empanada dough since forever my grandmother would always talk about long 3 day parties in Havana, Cuba at social clubs with lots of dancing and drinking and tons of great food. She said her father would make a giant "Empanada" the size of a table in huge ovens and filled them with Cuban "Picadillo" that had chorizo español in it and also some where filled with Cuban version of "Ropa Vieja" that had chorizo español to... but she NEVER knew how to make it, she only remembered her father making it and knew that it had flour, yeast, and oil but no measurements.

So luckily when I saw Pilar Lechuza's blog I was like YES!!!!! I found the dough! Ha ha! I am so grateful. You guys should check some of her "Empanadas"

So yeah continuation I guess this is "Cuban" adaptation of a Galician dish, I believe Empanadas originated in Galicia, Spain and then spread the the formal Spanish colonies which later adapted their versions of it, but I am pretty confident in saying that out of all the formal Spanish colonies Cuba was the most heavely influenced by the Spanish ATLEAST the Cuba that existed before Castro's regime (before 1960) god knows what the government makes Cubans in Cuba eat (probably only rice and beans no beef, etc. crappy rations). I also remember having something similar in "Portos Bakery" which is a really good Cuban bakery here in California, but they no longer have it, I remember back in 1995-97 me and my parents and grandma would go eat our Cuban Sandwiches and desserts and we would order a pie similar to "Empanada Gallega" filled with Picadillo, and also a pie stuffed with Guava Paste and Cheese, but it appears that they no longer carry these as they are absent from the menu and the place apparantley. Now days I just go there for the "Medianoche" Sandwiches, "Pan Cubano", "Pastelitos de Guayaba Con Queso" which Im learning to make eventually.

Ingredients for filling (You can make this a day in advance, this recipe for filling makes more than you need but you can use this filling for other types of Empanadas you can make a meat pie using a store bought pie crust, you can buy puff pastry and fill with this or just make the fried type of Empanada called "Empanadilla" or even make the Cuban "Papa Rellena" using this):
-1 pound ground beef
-1 pound ground pork (optional you can use more ground beef instead)
-4 small or 2 large Spanish Chorizos minced
-1 large onion minced
-2 medium or 1 large green bell pepper (I like using both green and red for this)
-1 small head about 12 cloves garlic minced mashed to a paste
-1 small bunch of fresh minced parsley
-12 oz of tomato sauce
-1/2 cup pimiento stuffed Spanish Olives
-1/4 cup capers
-1 1/2 teaspoons of ground cumin
-1/2 teaspoon oregano
-salt to taste
-Extra-Virgin Olive Oil
Ingredients for dough:
-4 1/2 cups of all-purpose flour
-1 3/4 cups lukewarm/ room temperature water
-2 tablespoons dry yeast
-1/2 cup extra-virgin olive oil
-1/2 teaspoon paprika (sweet paprika)
-salt 1 teaspoon more or less (1/2 teaspoon) depends on you

Directions for filling:
(1)Make the filling by heating 1/4 - 1/2 extra-virgin olive oil in a really large pan on medium high and add minced Spanish Chorizo, bell pepper and onions sautee until fragrant and onion is translucent. Add garlic and minced parsley and sautee 2 minutes, 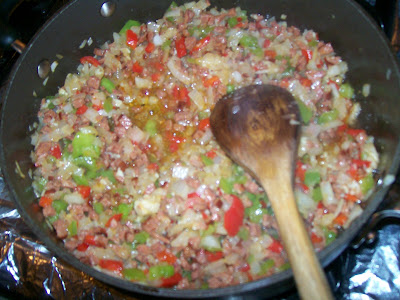 (2)Add ground beef and pork sautee, season with cumin, oregano. Brown the ground meat well. If the meat releases to much fat drain it BUT reserve the fat you could use it for the Empanada dough if you wish. 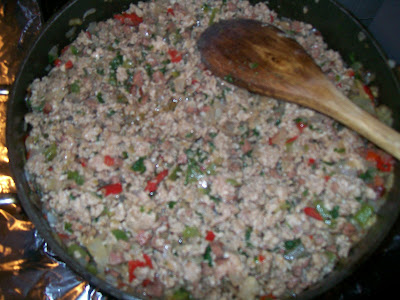 (3)Now add tomato sauce, olives and capers, stir well, bring to a boil and cover to simmer on low for 5 minutes, uncover, stir and dry out a bit (you don't want it to be super saucy or it will be to runny for a filling cook it until the tomato is well incorporated but not saucy just pasty. 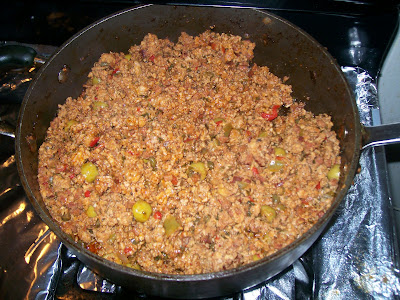 Directions for dough:
(1)Heat 1/2 cup olive oil on medium low heat with the 1/2 teaspoon of paprika, when it bubbles ever so slightly turn it off, and set aside and let it cool to room temperature. 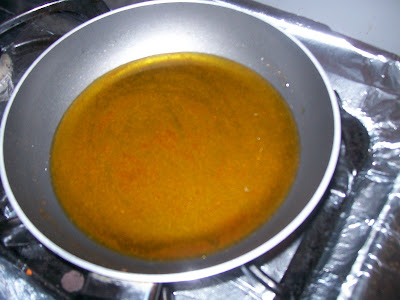 (3)In a large bowl place ONLY 4 cups of flour make a well in the middle, and pour in oil and yeast/water mixture along with 1 teaspoon or 1/2 teaspoon of salt.

(4)Stir well with a wooden spoon until dough forms kind of into a ball.

(5)Lightly dust a board or your kitchen counter with flour spread well and work the dough by folding and pressing fast, add more flour as neseccary until the dough doesnt stick to your hands and seems to have the right texture. 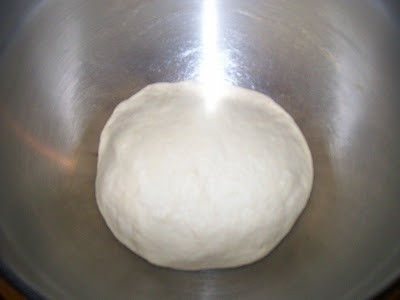 (6)Now put in a large bowl and cover with a towel over the top, let it rest 1 hour 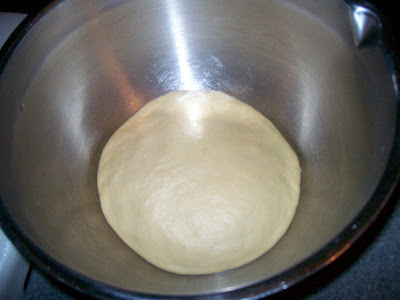 Directions for cooking after the final procedures:
(1)Lightly grease a oven pan and dust with flour very lightly by dusting then shaking off excess it can be round or square it can be a large one and you can make one giant "Empanada Gallega" or you can do 2 medium ones, whatever they should be around 35 centimeters about 14 inches in diameter or a large one that is square and long you get the point use some common sense. 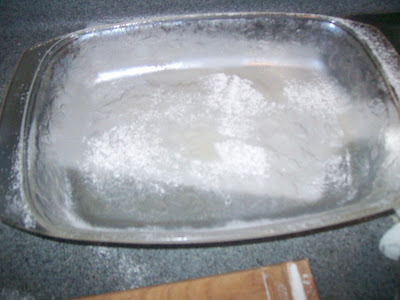 (2)In a floured surface take out dough, cut in half, roll out 1 half to be the bottom crust, roll it out thin but not to thin you want the bottom thicker than the top. Place bottom crust on oven pan, now place filling over it. 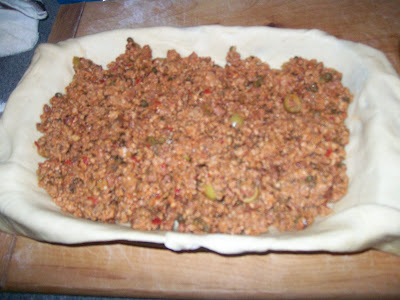 (3)Now you make the top crust the same way as the bottom except thinner. Place over filling, fold edges and close them by pinching, you can cut off any excess and decorate with excess pieces and if you used a smaller pan you can use the leftovers to make another one because your likely to have alot of filling left and some dough. 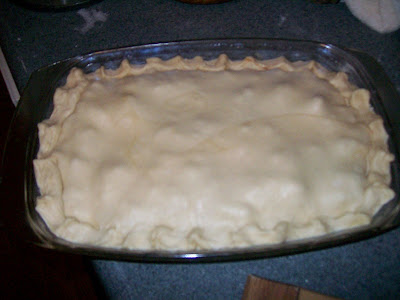 I had some leftover dough because I didn't make it so big as you can see: 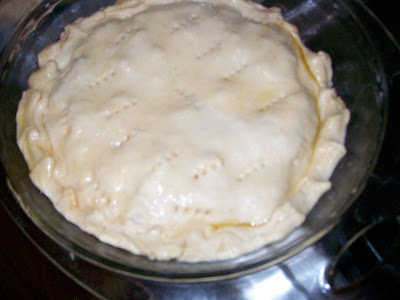 (4)Poke small holes on the top crust. Lightly brush the top with some olive oil, paprika mixtute or a beaten egg. Bake in the oven at 355 degrees fahrenheit, for about 45-60 minutes until lightly browned 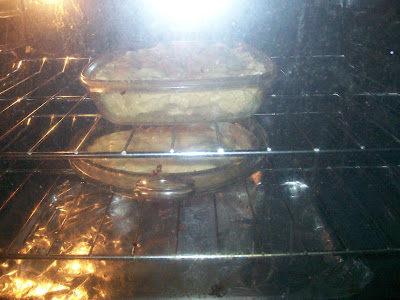 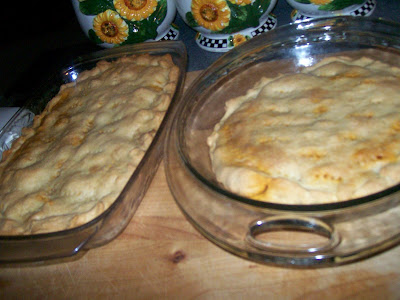 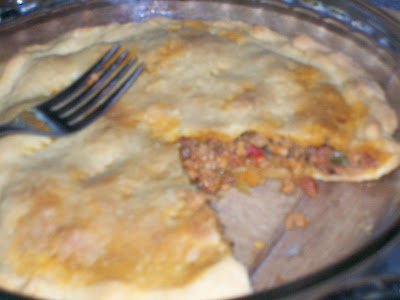 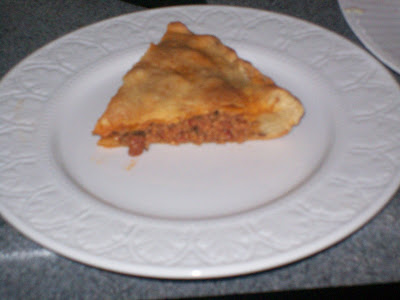