Mole (pronounced Mole-ay) is a term used to describe complex Mexican sauces that usually have a variety of dried chilies, chocolate, nuts, and spices used to cook turkey, chicken or pork depending. The best way I can think of to describe it to people not familiar with Mexican Cuisine is that "Mole" is a type of Mexican "curry" with tons of variations, some are almond based, some yellow from using corn masa, different shades of red depending on the peppers, some dark shades of brown of black, etc. and one of the very unique one's that deviate from the typical is "Mole Verde" a.k.a. green mole, which is based on a variety of leafy greens, green tomatillos, and sometimes green pumpkin seeds.


The recipe I share with you today is Mole Verde, and it is by far my favorite recipe for Mole Verde. This recipe has been passed to my mother by her dear friend Carmen, whom is a 96 year old Mexican woman originally from Guadalajara, Mexico who learned this recipe from her mother so it dates back at least 100+ years, she like me and my mother has much love for the kitchen, and has taught my mother a thing or two about Mexican Cuisine. Her recipe for "Mole Verde" is by far the most healthiest, simple, and delicious version I have had.

The sauce unlike some Mole Verde's I've tried is extremely smooth, because the greens are cooked prior to blending as well as the tomatillos, recipes that blend everything raw then simmer tend to not produce smooth sauces, they tend to be grainy to some extent. Also it isn't heavily spiced, it's the natural flavor of the different greens and vegetables that give this sauce it's flavor which are pre-dominantly mostly from the smokey taste from the poblano peppers, peppery tones from the radish leaves, it get's slight citrus taste from the cilantro, and the special green/ herb in here is "Epazote" which has a very strong taste and flavor, I can describe it as earthy, strong pungent smell? It's very hard to describe the taste, extremely unique. Like maybe "brothy"? So I guess I can describe it as smokey and peppery without being spicy, as well as an acidic fresh bite from the cilantro to balance the earthiness and brothiness of the Epazote, then I forgot to mention the meaty citrus taste of tomatillos, and we all know how good onions and garlic are too, all this is just married the right way together to produce a healthful, flavorful and savory green sauce that is stewed with meat. It's just one of those things you gotta try.

And just a heads up for all those having all these healthful New Years resolutions or who need a break from the sugary, rich and fatty diet of the new years and Christmas (although sugary, rich, and fatty is me almost every day) this is a real healthy great recipe to try because for one in this version of Mole Verde everything is boiled nothing is fried or has fat added to it, it incorporates tons of healthful greens, and can be made with chicken which is generally accepted to be a more "diet" conscience alternative for many (when the skin is removed) I however just eat everything in moderation but just a heads up for those who aren't like that ha ha.

Ingredients for the stock:
-1 whole chicken 3-4 lbs., cleaned, washed, cut into sections (I wash it several times after cutting in sections, then the last wash I submerge it in water with a lot of salt, and either vinegar or lime and swoosh and drain then rinse with water again. I'm just real picky about chicken and pork don't like the after taste if it's not well cleaned)
-3-4 bay leaves
-1 tsp whole black peppercorns (or black pepper to taste)
-4 cloves garlic
-1/2 onion
-2 tsp. chicken bouillon
-2 tsp. salt (or more to taste)

Ingredients to finish the dish:
-1 head of Romaine lettuce washed and roughly chopped
-1 handful of fresh Epazote about 1/2 of a large bunch washed.. for some reason this herb just reminded me of weed... though it does look sorta different ha ha 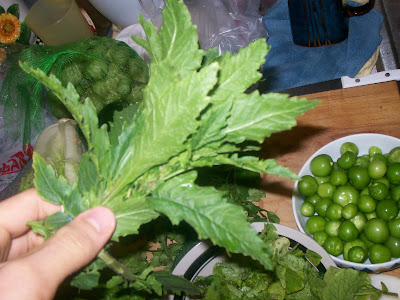 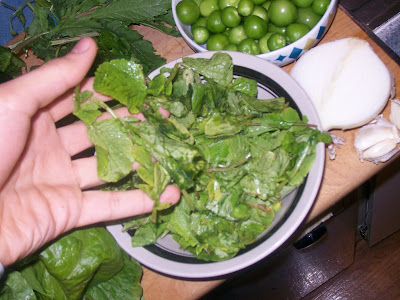 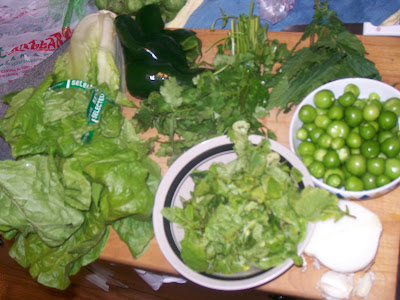 (2) Add CLEANED and already cut into sections chicken to the pot. Wait for it to come to a rolling boil, skim off any impurities and boil for about 30- 35 minutes. (You do not want to overcook the chicken to the point that it falls apart becuase you will cook it longer when you stew it in the green sauce and use the stock to form the sauce) (3) After chicken has been cooked, remove from stock, strain the stock to get rid of the pieces of things used to make it. So you just get a golden clear stock. Set aside.

Directions for the rest of the dish:
(1) Get all your cleaned vegetables and throw them in a large pot EXCEPT the garlic and onion, add about 5 cups of the reserved chicken stock, you don't need to submerge them just add about 5 cups trust me, you just want to cook em down and wilt, you can thin the sauce out later as needed, cover and bring to a boil about 10- 15 minutes 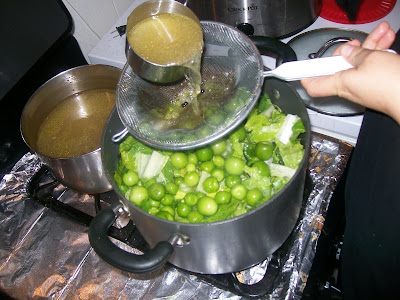 When the tomatillos change color, and sorta pop then you can stop simmering it 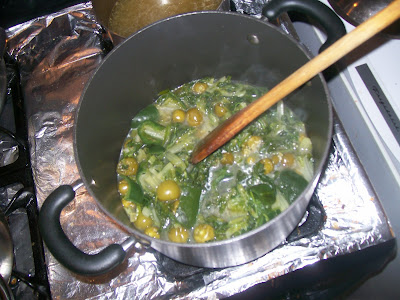 (2) Blend all your boiled vegetables in small batches, adding more chicken stock if necessary to blend BUT don't add to much or it will be to liquidy I did it in two batches along with garlic and onion. Here's the first batch 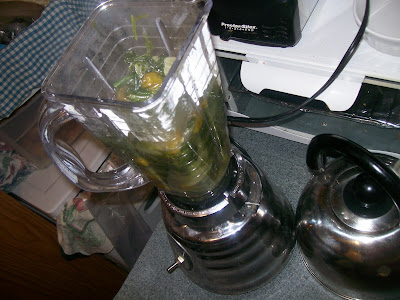 then adding it to the pot that I set my chicken aside in, no need to strain just blend it until real smooth 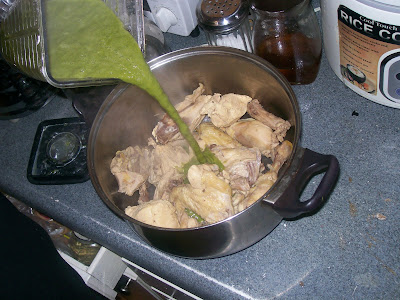 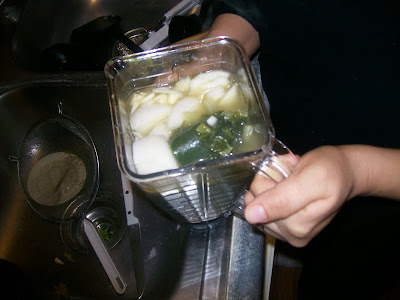 same thing pour it into the pot with chicken 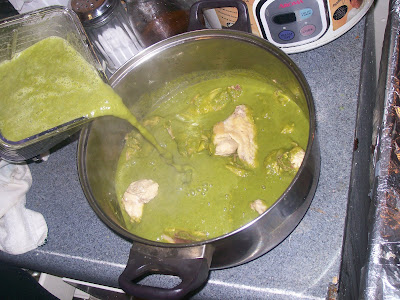 (3) Now put the pot back on the stove, and set heat to high and bring to a boil, lower heat and simmer on medium low uncovered, stirring occasionally for about 20- 25 more minutes, if the sauce is to thick, add more reserved chicken stock about 1/2 cup at a time until it's as thick as you want it or as thin. REMEMBER it thickens as it cools, and also REMEMBER YOU DO NOT WANT THIS TO BE SOUP either, it's a stew. After boiling 10 minutes, check and see if you want to add more salt to taste. When it's done cooking it should look like this :) 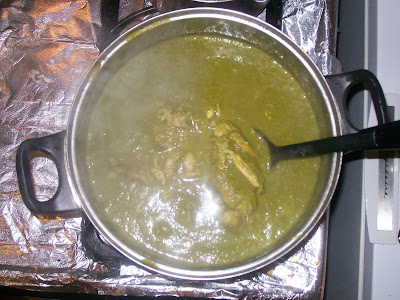 (4) You will have leftover chicken stock, you can save it for other dishes, for making soups, rices, etc. my mom used some of the leftover chicken stock to make Arroz Rojo (Mexican red rice), and some to use to make a very spicy salsa in which she used the stock instead of water, you can try and make the "Salsa de Chile de Arbol". This mole can be served in a large bowl with tortillas, and if you'd like a side of red rice, and for those who want to get super full a side of "Frijoles de le Olla" (Mexican boiled beans) or even refried beans. 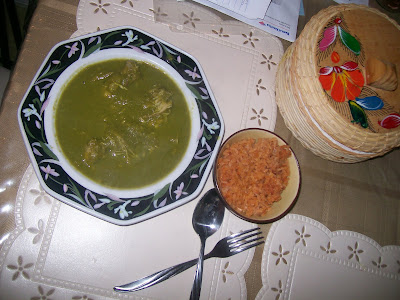 PLEASE NOTE:
*This green Mole sauce is NOT spicy at all, just smokey and peppery. So for those who don't like spicy, you should try it out. We make a separate hot sauce at home to serve it with for those who love the heat. Now for the home cooks who want to make this spicy, you may add maybe 3-6 Serrano chilies depending on how hot you want it....... also I just want to add I've seen pre-made green pastes to make like "instant" mole verde at the Mexican stores... I'm sure they are good... but something about using a pre-made paste of old preserved greens makes me feel eh when I have the option to make it fresh at home, and it isn't so difficult to make at home or any harder.

P.S. Ima say it again... hehe if you'd like to help me out please vote for me to win a chance to have my own recording and be feautured on the cooking show Delicioso on "Univision" by voting for me in the below link. It is one of my dreams to be in something like that :)

http://cocina.univision.com/delicioso/episodios/article/2011-01-05/el-bloggero-delicioso
Posted by Nathan at 12:07 AM 5 comments: