"Fufu de Platano" is the MOST favorite dish to consume in my house. It is the Cuban version of the "Mofongo" (a plantain mash from Puerto Rico and Dominican Republic), my grandmother's version is essentially meaty fried pork rinds, lots of garlic, olive oil, green plantains and salt turned into a smooth bread dough consistency and folded in is minced cilantro or flat-leaf parsley delicious consumed with rice or bread to mop it up.

In my house when making "Fufu" we have to buy "Chicharrones Botanerros" which are a delicious fried pork rind that has the crispy skin and about 1 layer of fat that is solified and fried it is very very tasty and for snacking at parties and stuff (popular in Mexican food) we by it when we make "Fufu" so no one will be tempted to steal the Pork rinds used in the "Fufu" (which are more meaty we call it "Chicharron Carnudo") it's one of my favorite snack foods.

Now on similar subject note, yes I know I can now imagine other people making fun of the name sayig, "Fufu!? what the hell is that sounds like Fofo (fofo in spanish can be used as a silly way of saying something stinks!)" but let me tell you the origin of this name, the name "Fufu" is West and Central African origin and it implies a thick paste usually made from starchy veggies, in my case Plantains. I read a story somewhere that the word "Fufu" started when in ships with African slaves being brought to the new world the people in charge of the slaves (I think they were British ships) would feed them mashed up root stuff and say "food food" and they mis-pronounced it as "foo foo" without the letter "d" thus came the name "Fufu"? Not sure how credible it is but an interesting approach to it.

Cuba in it's colonial Spanish times a long with many Caribbean nations received a lot of West Africans because the natives (Taino's) mostly died off from over working and were quickly replaced with West African slaves so this is were probably some African influence comes into play of this dish, also considering that I've heard that Black Cubans did a lot of the cooking back then for wealthy families. 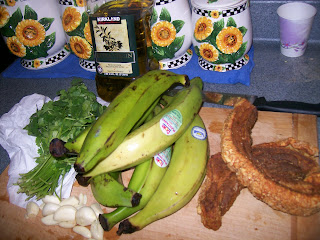 Directions:
(1)Carefully peel green plantains make a slit down the peel and carefully peel off to not break plantain, cut into chunks and throw in boiling salted water to cook until they turn yellow and turn more tender (25-35 minutes? I wasn't looking at the clock) 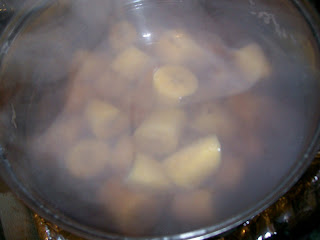 (2)Now when plantains are done leave them in water while doing the rest, heat a large shallow pan with olive oil heat on medium high when oil is hot enough add chopped meaty pork rinds fry them until they render fat and turn a little more crisp about 5 minutes more or less add garlic and sautee for about 2-3 minutes. 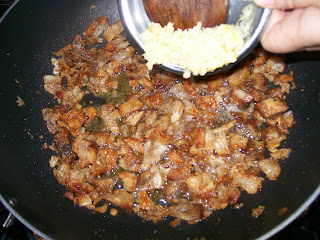 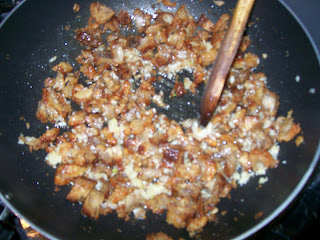 (3)With a spoon that has holes (to drain) scoop our plantains and add to the pan, start mashing in and mixing as it becomes dryer drizzle over it olive oil mash more, add a little bit of the broth at a time (I add 1/2 cup at a time) and stir and keep mashing everytime it dry's out add more of the broth, keep mashing until is turns into a bread dough constistency it will start to not stick to the pan and sort of become like a workable dough. 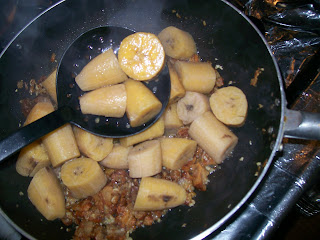 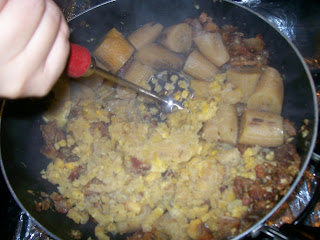 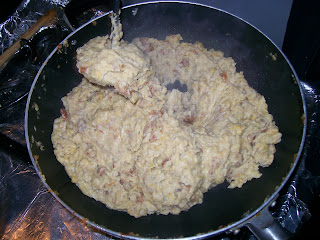 (4)At this point gently fold in minced cilantro or parsley (we used cilantro) and turn off heat. 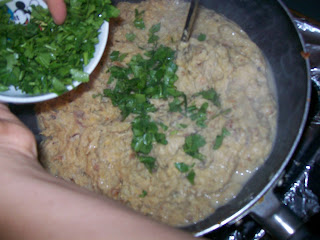 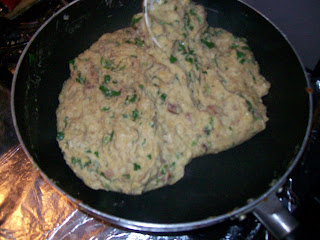 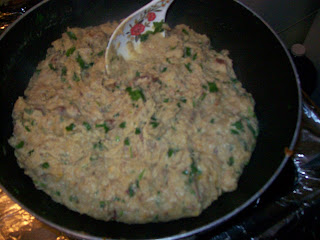 To Serve:
We usually serve with either crusty bread (Cuban bread or French Bread in it's place even "Bolillo") or rice with a nice raw salad and whatever side dishes (soup or fresh fruit for dessert, etc.). My grandmother when she eats the "Fufu" she'll roll it into a ball with one hand and grab the rice with it, or eat it like little meat balls it's sooo good. I served it with "Calabaza Con Mojo" (starchy orange squash smothered in garlic lime, a mixed salad, lentil stew again as a soup, and refreshing fresh cubed seedless watermelon for dessert) 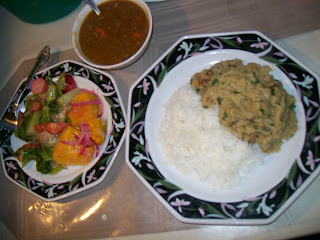 PLEASE IMPORTANT NOTE:
-When you prepare this serve immediately or very shortly after and cover well as the "Fufu" cools it becomes harder and dryer because it absorbs a lot of moisture. To re- heat leftovers heat very little oil in a pan mash in Fufu again and add a little water to smooth out to desired consistency.

-ALSO do not be alarmed if the Plantain broth is red it is because it released a lot of Potassium and probably some natural pigmentation or something into the
water.

-In my home we don't serve it with any meat side dishes because the Fufu already has plenty of meaty pork rinds and plus we snacked on plenty of Chicharron while waiting for the Fufu.

P.S. I have seen some Cubans do other versions of this dish, for example Jose from the blog "Arroz Con Frijoles" uses sweet overly ripe plantains, bacon, garlic and olive oil and omits anything else besides salt for "his (Jose's) Fufu." Marta from "My Big Fat Cuban Family" does her (Marta's) "Fufu" different she uses yellow plantains with little black blotches and does it very different from me and also very different from Jose's. So it seems to me this dish can vary greatly from Cuban kitchen to kitchen, of course I have more love for my version it's how my Tata (my grandma) makes it, it's more on the savory side :)... Wonder how Marilyn and Mamey (Omar) make it...?
Posted by Nathan at 9:42 PM 7 comments:

This is the BEST Cuban lentil stew I have had! I made this lentil stew this week on Dec. 8th then I made it again today Dec. 13th haha because it was that good to me. I am not posting the recipe because it is not mine and I have not asked for permission to post it.

It has a slow cooked, smokey meaty flavor and is gauranteed to stimulate the taste buds, it's like an "umami" sensation bomb.

I got the recipe for this lentil stew from a blog called "Cuban Home Cooking Keeping the Tradition Alive" this blog once a month show cases a Cuban recipe cooked by a Cuban friend or relative. I will tell you this I think out of everyone thus far Miriam is one of the best cooks who has appeared on the blog. Her recipe for "Croquettas de Jamon" (Ham Croquettes) looks devine and I am looking forward to making it in the near future.

I am not posting the recipe because I didn't ask for permission or anything like that, BUT STILL I don't want to be stingy and not share this wonderful recipe find so I URGE anyone who wants something delicious and simple to make this.

You'll love it, from the list of ingredients you'rr know you can't go wrong (common honestly it has "Sazon Goya", Spanish Chorizo, Smoked Ham Shank, Bouillon, and the holy sofrito stuff like onion, garlic, bell pepper, and olive oil there is no way in hell this can come out bad and with all that it's gauranteed success, just don't over do the salt) 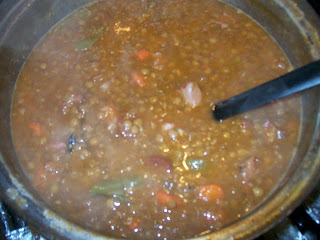 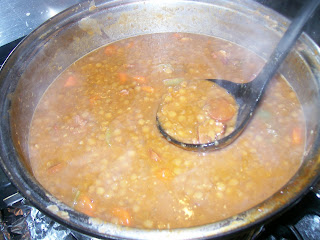 SO HERE IS THE RECIPE LINK GO CHECK IT OUT! Try it!: