I am gonna be honest, I am not fond of this dish, I do not like it much, and it is not that it "tastes" bad, it's that I don't like Okra or I simply prefer to eat another dish.

I saw some Okra in the farmers market, and I know there's Cuban dishes that utilize it, even though my grandmother never made any in my presence that I know of, so I decided to buy some Okra I gave my grandmother a call and asked her how can I make Okra and meat Cuban dish that she might know.

So she told me and now I'm making it, but I personally do not like the okra, my grandmother said she never cooked it because she HATES it, that she has bad memories from it every time she sees okra it reminds her of her abusive step mother in Cuba who would cook pork with okra and make it all gooey and nasty my grandma said she would make it all sloppy and gooey then she would lock my grandma up and starve her for sometimes up to 3 days until she would eat the Okra with Pork.

Anyways my grandmother gave me a recipe she said this one is how her Dad made it she recalls and that it was prepared good and not a sloppy gooey mess, that is not my favorite but it's still good if you like Okra so my suggestion, if you like okra make this if you don't skip it.

Directions:(1) Bring a large pot of salted water to a boil, while waiting for it to boil prepare a seperate large bowl with ice cold water set aside, trim the ends of the okra and slice into thick pieces maybe 1 inch thick. Add to the boiling water and boil uncovered until bright green.

(2) Drain it, shock it in cold ice water, swoosh it around for a while,add lime juice, and set is aside.

(3) Now heat olive oil in a pan on medium high, brown the pork meat with salt and pepper, now add a little more oil and sautee onion and bell pepper until translucent about 5 minutes, add garlic sautee until fragrant about 30 seconds to 1 minute, now add a couple generous splashes of dry white wine, add the tomato sauce and about 1 cup of water, season with salt to taste again if necessary and add ground cumin, stir, bring to a boil and simmer on low about 1 hour until pork is tender.

(4) Uncover check if meat is tender with a fork, if so turn off heat and drain okra, pat dry, and fold into the dish your ready, serve with some white rice and maybe some fried plantains. 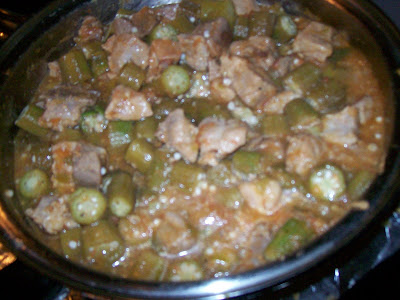 P.S. I was tired and lazy I didn't take all the pictures I needed for this recipe.
Posted by Nathan at 10:32 PM 4 comments:

I don't know how to say it in english, "Tortilla Española" is a thick frittata type egg cake you could call it, that is heavy on potatoes. The classical Spanish one is simply thin slices potatoes into rounds, deep-fried, folded into beaten eggs with salt, pepper and parsley then fried in a large pan into a thick egg pie thing...

But my grandmother does it different, I like to think of hers as "Tortilla Española" on steroids, and I am courageous enough to say it's way better than the simple potato one.

Oh yeah and even though this dish is originally Spanish, Cubans love Tortilla Española, ha ha some even call it "Tortilla Cubana", I have noticed that most Cubans cut the fried potatoes into cubes (we do in my house to) for this type of omelette, but I noticed Spanish cooks do it into rounds, well whatever here is my grandmothers AWESOME version.

Directions:
(1)Heat cooking oil enough to pan-fry/ deep-fry cubed potatoes, when oil is hot enough (test it with a wooden spoon if it bubbles around it's ready). Add your potatoes and fry them this may take 20 minutes, meanwhile you can prep everything while the potatoes fry. When potatoes are done set aside in a plate with paper towel on bottom, very lightly salt them. 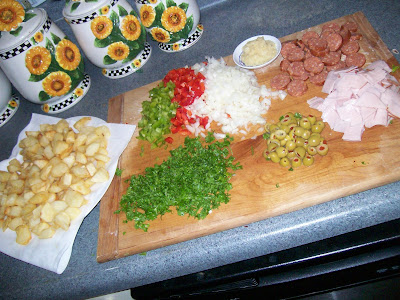 (2)Now heat extra-virgin olive oil in a large pan on medium high, sautee minced onion and bell peppers until onion is translucent, if using parsley add the minced parsley to this (if using Cilantro don't it will wilt badly) and sautee together, now add garlic and sautee until fragrant. 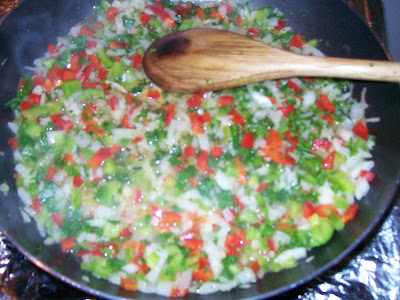 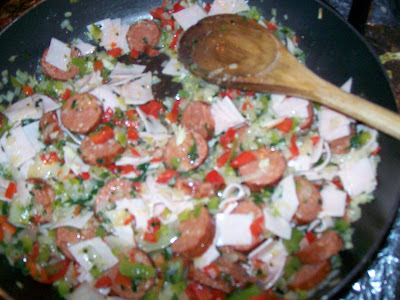 (4)Turn of heat, now in a large bowl, crack all eggs into it, and beat until it foams, add some salt to this, now add all the contents you sauteed, and fried potatoes fold in, mix in sliced olives and fold some more. If using cilantro add it now (if you used parsley don't add cilantro) 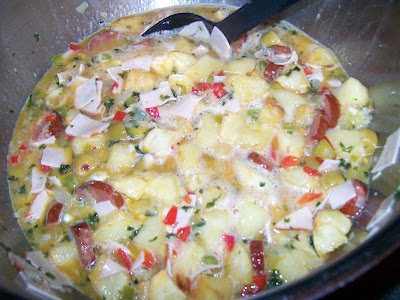 (5)Now heat extra virgin olive oil in a large pan on medium high, not a lot just enough to lightly coat, add the egg mixture, don't touch it, gently push around a little every time the egg slightly cooks to allow it to cook sort of evenly, be patient, push in sides gently try to let the egg kinda flow and slowly cook but don't break into it, then set heat on medium and cover with a large plate, let it cook on medium to medium low for about 6-7 minutes, uncover, see if it settled a bit and is more firm but not fully cooked it so now do the following. 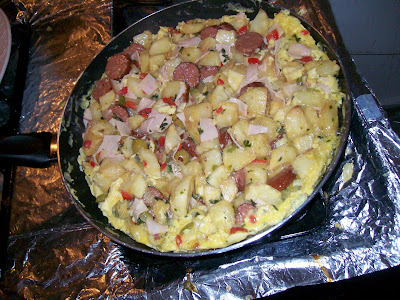 (6)Turn off heat, place plate over it, use a large towel to hole the plate onto the pan and grab the pan, flip it over so you flip the omelette on one side, now turn pan back on lightly oil with extra-virgin olive oil, gently slide it back in slowly, shake the pan a bit not the omelette, cover for 5 more minutes to fully cook on other side.
(7)Turn of heat, clean the large plate you used, now use it again to flip the omellete into it, or if your scared you can simple leave it in the pan and slice it and get it from there if your scared you'll break it, we never break it though it's experience ha ha. 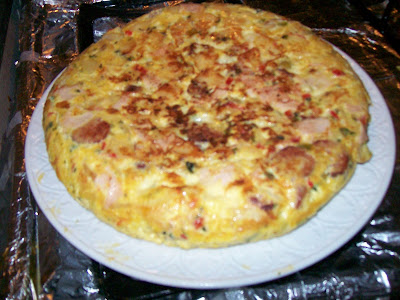 (8)Serve by cutting big cake like slices and serve, it can stand alone it doesn't need any side dishes, it can be eaten for breakfast with a glass of milk and fresh seasonal fruit on the side or even alone with a cup of coffee or cafe cubano, you can have it as lunch by itself with a salad on the side and beverage of choice, or simply for dinner along with rice, beans and a salad at least that's how we eat it in my house, you can even have it as a late night snack cold from the fridge (I'm bad sneaking into my fridge at night tsk tsk,) 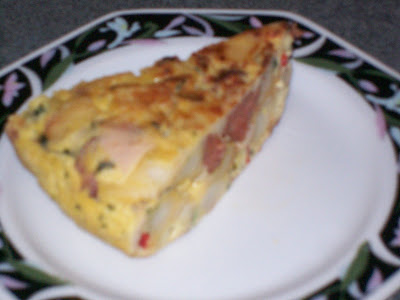