Yeah I know it sounds odd, it's the silky looking hair part of the corn, we only use the clean looking one's that look beautiful (discard any brownish dirty stuff)

It's suppose to be "bueno pa'los riñones" (good for the kidney's) I don't know I'm not a doctor and currently it's finals week in school for me and I don't feel like researching it ( If your curious google around :)

Regardless of medical benefits or not, it's refreshing especially served cold in this summer heat.


So since corn is in season and there's all this wonderful fresh sweet corn don't waste and throw away the beautiful corn silk give this tea a try. It has a subtle light corn taste.

Ingredients:
-water (I don't know I just added water to the pot until it looked right maybe 9-12 cups)
-corn silk (from about 6-8 fresh corn cobs) 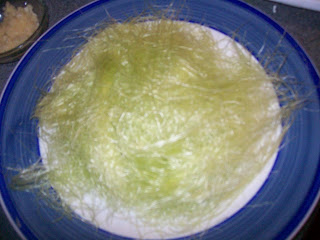 Directions:
(1)Bring water in pot to a boil with corn silk, and boil together for about 10-15 minutes. Turn off, you can drink it now or let it cool, sweeten with sugar to taste if desired and keep cooled in the fridge. 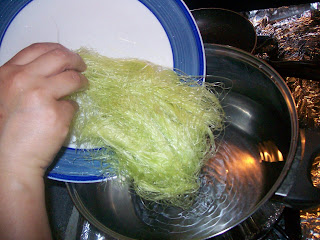 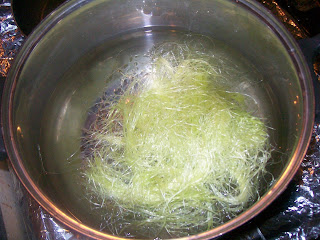 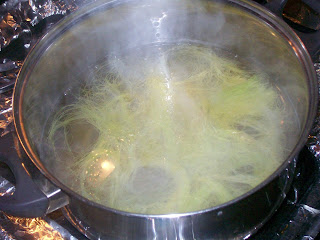 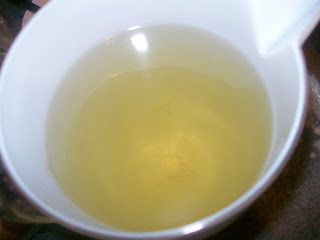 P.S.
This tea apparently is consumed by both Cubans, Mexicans and other cultures so I'm labeling as both.

We never made any type of Cuban corn stew in my household, but I was reading "Memories of a Cuban Kitchen" (it's also posted online "Guiso de Maiz" by Mary Urrutia) and I also saw a recipe for "Guiso de Maiz" by Nitza Villapol (the communist Cuban Julia Child) after reading those recipes I felt like making a corn stew (yes even in the summer heat :) so I observed both recipes, both where a bit iffy, I read both recipes to get an understanding of the dish, and then I just cooked it my way to suit my families taste preferences.

My version of the dish is like the Cuban "Potajes" I usually make but instead of being bean/ legume based it's fresh sweet corn based. (Corn is in season so expect some more fresh corn dishes the corn at the store looks beautiful. My grandma taught me a delicous dish with pork meat and corn in a creole sauce very good hopefully I'll have the chance to make that some time soon)

Directions:
(1)Heat olive oil in a deep large pot on medium high, sautee cubed pork until browned and renders some fat, add spanish chorizo, sautee until aromatic, now add onion and bell pepper sautee 5-7 minutes until translucent, add garlic sautee 2 minutes, throw in cumin and stir until fragrant like 30-60 seconds. Now add tomato sauce until it stats bubbling let it cook for about 2 minutes. You finally formed you base (sofrito with ham and chorizo) 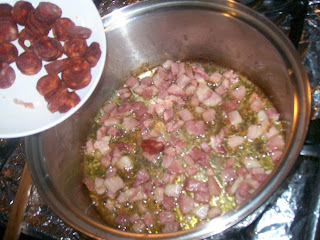 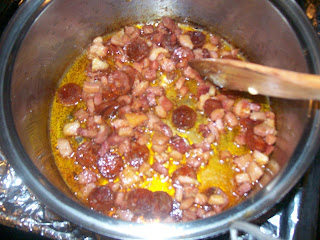 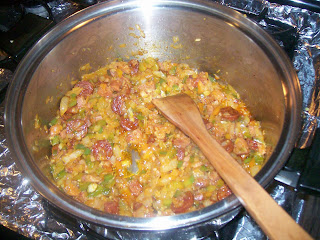 .... I forgot to take a picture of me adding the tomato sauce but you get the point and sofrito looks damn good already ;)

(2)Add corn kernels stir well, add water, throw in potatoes and calabaza along with water, salt to taste and bring to a strong boil cover and simmer on low 30 minutes, uncover and it's done. 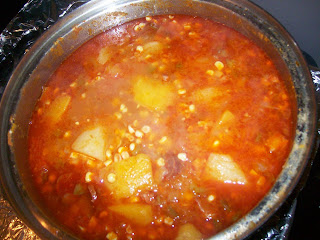 (3)You can serve it alone or if you don't mind all the carbs eat it with bread :) I think a nice salad is good with it to but not nessecarry. 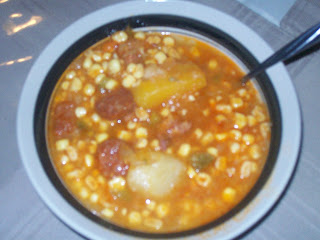 SUPER IMPORTANT NOTE!!!!:
-When peeling the fresh corn cobs do not THROW AWAY the corn "hairs" (those silky looking hairs from the corns inside???? I will show you how to make a refreshing tea with it that we make in my household)

Lastly:
You may be interesterd if you have fresh corn in this Cuban dish I make "Arroz Con Maiz" (Steamed Yellow Rice with Corn)