This is a very easy simple, typical Cuban Red Beans and Rice known as "Congri", Congri is the preferred mixed rice and bean dish of the people from "Oriente" provinces of Cuba which are most of the eastern provinces all the way to the south end of the Island. It is rice steamed with red bean broth and red beans. Oriente provinces are more African influenced and native Taino influenced I believe I've read somewhere that the word "Congri" came from the Haitian Creole language with it's root words being "congo" referring to the beans and "riz" referring to the rice put together as "Congri" not sure though...

Western Cuban cooking (I'm speaking more towards the capital Havana) which is more inclined towards Spaniard cooking prefers and commonly makes "Moros y Christianos" (Moors and Christians, the black beans represent the Moors the white rice represents the Christians and former power) it is white rice steamed with black bean broth and black beans. It is seasoned differently than Congri usually and has no pork product more often than not (though sometimes my grandmother will use bacon grease) Moros is what is typically consumed at my home, but occasionally I crave some Congri.

My grandmother makes a different version of Congri most of the time she calls, "Congri Con Coco" (coconut flavored version of Cuban Red Beans and Rice) it is not an authentic dish, but my grandmother said she was taught to make it this way by Haitian friends she knew in pre-Castro Cuba.

Directions:
(1)In a medium pot rinse red beans well, add 12 cups of water stir, bring to a boil on high then cover and simmer on medium low for about 60 minutes. (IMPORTANT DO NOT PRE-SOAK OR OVERCOOK BEANS OR MAKE THEM SUPER COOKED BECAUSE YOU WILL RUIN THE WHOLE RECIPE BECAUSE IF BEANS ARE OVERCOOKED THEY WILL RELEASE STARCH WHEN COOKING WITH RICE AND THE RICE WON'T ABSORB LIQUID AND OR YOU WILL END UP WITH A MESS! IT'S HAPPENED TO ME BEFORE!)

(2)The beans should be soft but not really mooshy and falling apart easily. They should be able to hold it's shape because you will cook them an additional 30 minutes with the rice. 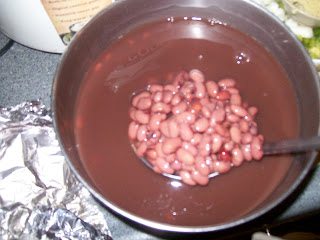 (4)Wash rice really well in rice cooker pot, then drain well, add red beans, and the amount of red bean broth necessary to cook rice (it depends what type of rice regular white long grain rice will only need 1 1/2 cups of red bean broth per cup. if using Jasmine White Rice that is new crop you will need equal water to rice so 1 cup red bean broth for 1 cup rice)

(5)Heat a pan on medium high heat, add the chopped bacon, render it's fat, leave it there stirring occasionally until it renders it's fat and gets crispier, now add onion and bell pepper minced, sautee until translucent, add garlic and sautee until fragrant, throw this sautee into the rice cooker where the rice, beans, and red bean broth it, add salt, cumin, oregano, bay leave, carefully stir without breaking or pressing red beans. 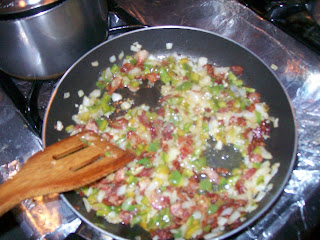 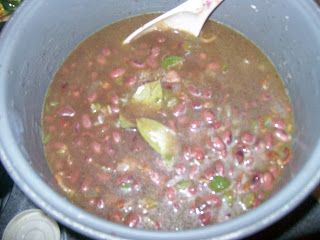 (6)Cover and set rice to cook, wait until the rice cooker beeps, your done, uncover and fluff carefully not crushing anything. 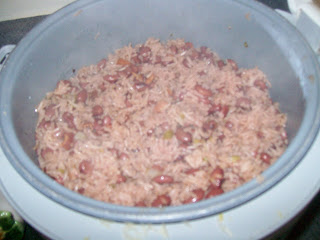 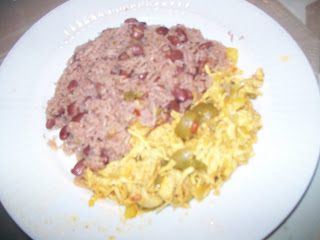