Today is the last day my second aunt (tia abuela) is staying over at my home. Before she left I kindly requested that I wanted to learn how to make "Jericallas" which is a cinnamon and vanilla infused custard baked in the oven in bathwater until it thickens and gets a golden brown crust that when cooled reminds me of a type of bread texture?, the custard actually puffs up in the oven it rises and becomes golden brown in the top, once cooled it has a creamy "jello"like texture como jelatina. It reminds me of of the Cuban and Spanish "Natilla" which is sometimes infused with lime or lemon rind, cinnamon, and vanilla, except the Natilla doesn't puff up, doesn't brown, and it is done solely on stove top and depends heavely on cornstarch, another it reminds me of it "Crema Catalana" which is similar to Natilla except it has a hard sugar crust.

This was the first time I have ever had "Jericallas" and I love them! I know other people always call the Hispanic/ Latino worlds custards "wanna be creme brulee" I have one thing to say, that statement is STUPID and IGNORANT! The Spanish speaking world has a variety of custards, each one with different variations because we enjoy these custard type desserts if we wanted creme brulee we would make "creme brulee" we have more custard based desserts than the french, so don't even try to compare!

Anyways before I say anything worse or offensive... without further a due here is is the recipe :)

Ingredients:
-8 cups of whole milk (2 liters or 2,000 mil.)
-3 cups of sugar AT LEAST add more to taste if desired ( I tasted it, it's sweet, but knowing me I would have liked 1 extra cup of sugar BUT my mother told me it's not suppose to be super sweet like I'm accustomed to ha ha)
-2 cinnamon sticks
-1 vanilla beans or 2 teaspoons vanilla extract
-12-16 whole eggs beaten
-8 tablespoons cornstarch (beaten and smoothed out with some milk enough to obtain a mixture that is not lumpy and not very thick)

Directions:
(1)Add milk, sugar, cinnamon, and vanilla to a large pot, raise heat high, stir every now and then, then stir constantly until it comes to a strong bubble and starts rising. 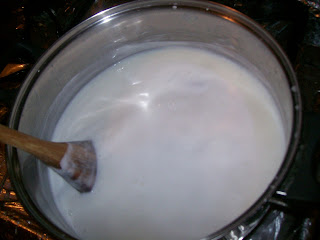 (2)Set aside and let it cool a bit, until it stops throwing vapor. 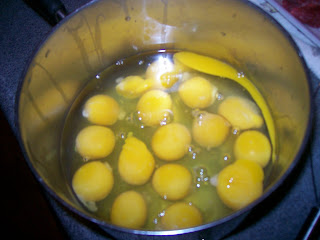 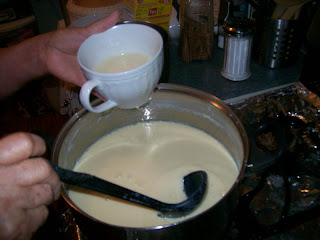 (4)In 2 large metal pans add water, put on your stove top and bring water to a boil, meanwhile fill ramenikins or big coffee mugs/ cups, make them fit into the pans with boiling water. 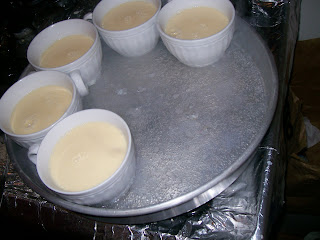 (5)Put in an oven pre-heated at 375 degrees fahrenhiet, uncovered, let them cook until golden to dark brown top and poofy about 30-40 minutes, remove from oven and let them cool at room temperature until they are not hot, chill in fridge if desired :) enjoy and be patient. 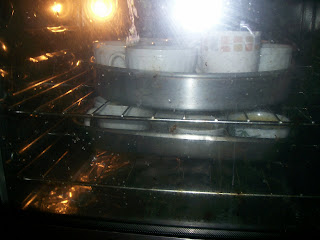 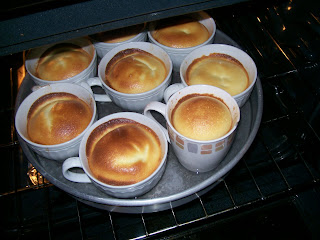 There is one cup missing in the final picture because I couldn't help myself and snatched a hot one to consume even though I'm supposed to wait for it to cool, but heck I was hungry and wanted dessert for lunch ^_^ 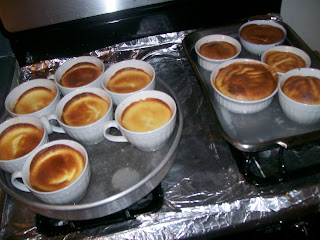 NOTE: In oven put them on the top rack because if you are cooking 2 pans 1 on top rack and 1 on bottom the bottom will never brown, that's what happened to me so when I was done taking out the top batch I moved the bottom one to the top one an extra 20-30 minutes until browned.

ALSO: This recipe makes a big batch about enough for 10-12 people so you may cut recipe in half.

FURTHERMORE: This custard has a slight egg flavor, if you don't like eggs you may not like this. I have seen recipes for this that don't call for cornstarch but BETTER SAFE THAN SORRY okey :)
Posted by Nathan at 12:43 PM 4 comments: