This is a Filipino recipe. How did I learn it you ask, well I have a very kind and nice Filipino friend which I visit frequently. Her mother always makes very simple yet flavorful dishes.

A couple weeks ago when I visited on a Sunday her mother had made this delicous dish called, "Ginataang Hipon" it had shrimp and vegetables in a coconut milk based sauce.

I loved it so much, because I love coconut milk, seafood, and vegetables it was served with Jasmine Rice and I adore rice, so this was basically just a dish full of things I love. I liked the meal so much I insisted on her telling me how she makes it and here it is a couple weeks later I tried it at home and it was delicous, it was all verbally dictated to me but I memorized it.

Ingredients:
-3/4's to 1 lbs. shrimp (any kind)
-1/2 a Kombucha Squash/ Calabaza peeled and cut into cubes (You can use any orange fleshed squash think)
-2-3 cups of string beans (cleaned, trimmed)
-1 bunch of spinach (very well washed coarsley chopped)
-1 can of coconut milk (which is about 2 cups or 2 cups and 1/2?)
-2 inch chunk of ginger, peeled, and sliced into thin rounds
-3-4 cloves garlic peeled and crushed whole or thinly sliced
-water (I'll tell you how much later)
-salt to taste
-ground black pepper to taste
-1 generous pinch of monosodium glutamine (MSG also branded as "Ajinamoto" optional) 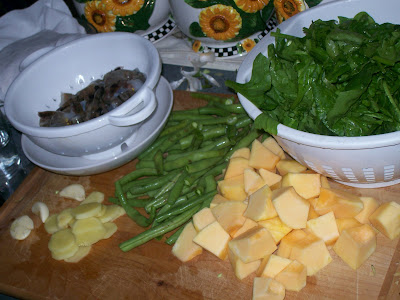 Directions:
(1)Here's some options, you can add the shrimp whole with everything just washed, or you can make an opening on the back remove the black line which is crap, and it's feet and head. But leave the shell attached to give the sauce flavor. Or you can peel them but your sauce won't be as tasty the shells give it good shrimp flavor.

(2)In a large pot add calabaza cubed, add the string beans and ginger as well as garlic, cover with water about enough to submerge about half of it, add a little salt and pepper, mix well. Bring to a boil on high, cover and simmer about 10-20 minutes on low heat until calabaza is tender and string beans to. 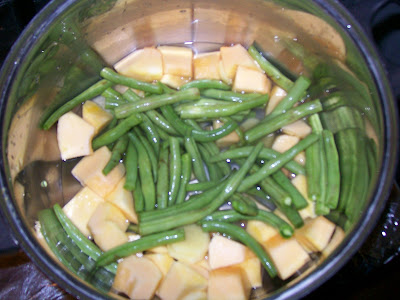 (3)Pour in coconut milk, stir, higher heat, bring it to a bubble/boil add a pinch of MSG, now add shrimp and fold in spinach and everything, when shrimp changes to cooked color and spinach wilts a bit it is done. 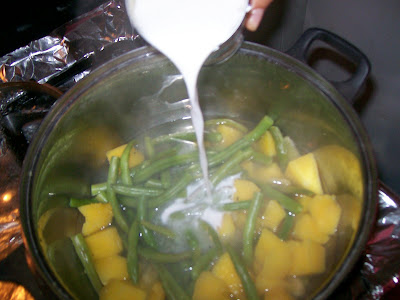 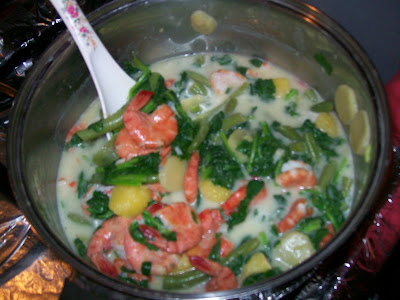 (4)Taste it add more salt if needed or pepper. DO NOT OVER DO THE MSG BECAUSE IT OVER POWERS IF OVERDONE. Leave uncovered for a bit so shrimp doesn't overcook until cooled. Also it may not seem that thick but once cooled it will thicken plenty, it is all personal preferance but I love it just the way it is. 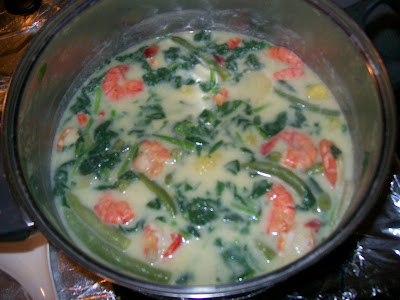 See super simple and delicous, takes less than 30 minutes and you can cook rice at the same time and it will be done quickly. Also don't let coconut milk boil for to long it will become greasy and oily because it will start to seperate. I've seen other variations of this dish online but this one is very healthy and tasty.

I don't consider coconut fat to be unhealthy as some think, go do some research/ homework on it, if you believe it to be harmful, and research the "coconut oil controversy."

P.S. I'm sorry I had no Kombucha Squash so I ended up using acorn squash, and I had no string beans so I used green beans, but it was roughly the same.

Posted by Nathan at 1:57 PM No comments: