Boniatillo, boniatillo is the name of a dessert in Cuban Cuisine that is like a creamy, sweet smooth pudding made from the Cuban White Sweet Potato. There are 2 versions of Boniatillo, 1 version is "Boniatillo Seco" (dry) which is dry, hard, and like candy, the other is "Boniatillo de Mesa" which is like a custard/ pudding (that is the one I am making) there are many versions of Boniatillo, some infuse it with coconut milk, other's add rum, some infuse with lime and cinnamon, others with orange, some add cream cheese, etc. the one I am making is from "Nitza Villapol's" book called "Cocina al Minuto" the NON COMMUNIST edition/ pre-castro not the other one that is communist and has dumbed down versions of Cuban food. (Sad)

I knew of this dessert because I've heard of it, but my grandmother never made it so I set out on a journey to find a good recipe and wa la someone had posted a photo of Nitza Villapol's book on the page where she wrote this lucky me. (I don't feel bad not buying it because Nitza stayed in Cuba and never got a dime for what she did, so money wont go to her anyway even if I bought the book plus she's dead RIP)

About Boniato is a type of white sweet potato used in Cuban Cuisine. It has a reddish dark purple skin, and solid white flesh, when cooked the flesh becomes a pale yellow. It can go by other names like "Tropical Sweet Yam", "Tropical Sweet Potato", "Cuban White Sweet Potato"

It is not as sweet as the regular sweet potato used in the USA (which is orange fleshed) it is very starchy, and has a potato like consistency with a hint of sweetness.

The Boniato oxidizes easily so it must be peeled quickly and put in water to prevent discoloration. Also it's very perishable try to use in less than 1 week stored at room temperature.

If you cannot find "Boniato" use a white fleshed sweet potato, like a Japanese sweet potato or something of that sort. 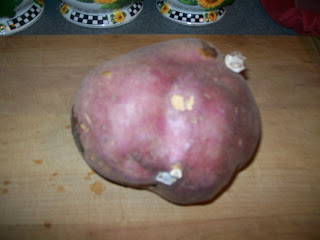 Directions:
(1)Peel Boniato, cut into big chunks, throw in a pot with enough water to cover, and a pinch of salt. Bring to a boil covered for 15-20 minutes (until it is tender check it by piercing it with a knife) 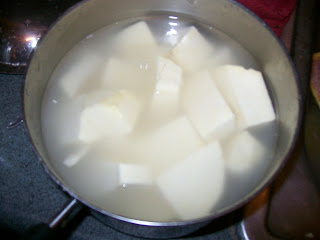 (2)Meanwhile, add sugar, water, orange peel, orange juice, lime juice to a pot, bring to a strong boil on high then let it boil on medium for 15 minutes. Remove orange peel. Set aside. 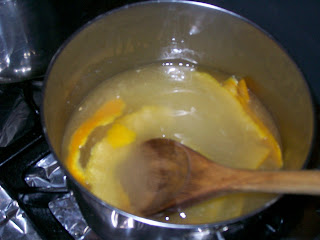 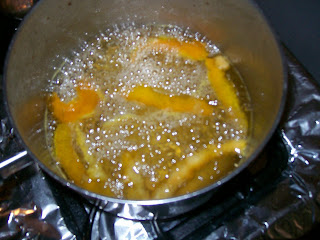 (3)When Boniato is cooked, mash to a paste (you can use the food processor to help or do it the old fashioned). Set aside. 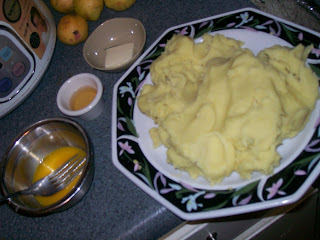 (4)Slowly mash in syrup to prevent lumps, bring mixture to a boil on high then lower to medium stir for about 6-8 minutes, add butter, stir well again, now remove from heat add beaten egg yolks slowly in a stream stirring fast in one direction. 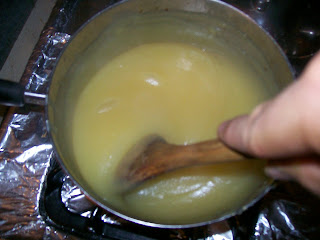 (5)Return to stove on medium heat and stir for 3-5 minutes, remove from heat, stir in wine. Put in individual serving bowls dusted with cinnamon or in 1 medium large bowl dust it with cinnamon. 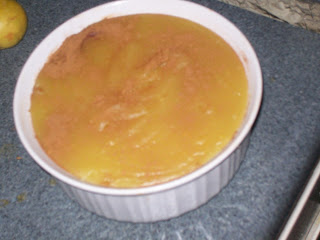 P.S. For a different flavor when making the syrup use 4 cups water, 4 cups sugar, peel of 1 lime, and 1 cinnamon stick and make into a syrup, and continue recipe as directed.

ALSO yes I know it's very sweet Cuban desserts are sweet, it's as sweet as marmalade, your only suppose to have a little bit, maybe like 1/4-1/2 cup after dinner to cleanse pallet from a garlic heavy Cuban dinner :)... sadly I can't help myself I had a big heaping bowl of this after dinner ha ha...
Posted by Nathan at 3:56 PM 15 comments: