Seriously ever since my Tata (grandma) moved back into the house she sometimes get's back into her cooking mode. Lately for myself having to work a job, school, exercise, social life/ partying, friends and everything though I still cook it is hard to do so many times, and I end up being very exhausted, but luckily I have a wonderful mom who cooks, and a grandma that has some killer stuff up her sleeve.

Anyways Tata saw I was really weak and drained from everything, and nothing picks you up or makes you stronger than a strong Potaje so the nights before having to go to school or work my grandmother took out an array of hardy ingredients a large ham bone, some stewing beef, and smokey spanish chorizo, along with some Potatoes, orange fleshed squash, etc. (I was like this is another Potaje) she told me "Voy acer un Potaje fuerte pa'que te alimentes bien, y te sientas mas fuerte, y pa'que yo me mantenga bien." (translates to "Im making a bean stew so you can get nourished and feel strong, and so I can maintain myself well too")

Luckily we almost always eat these types of stews. They are healthy, nutritious and filling, all the minerals released from the bones, protein from the meat, heart healthy fiber from the beans, vitamins and antioxidants from the peppers, orange fleshed squash, potatoes, lots of olive oil, spices it's real good for you a medley of everything you need in one. Yes it has animal products but honestly for a stew this large you end up eating a few pieces of meat and sausage with tons of beans, pumpkin, potatoes, etc. it's pretty well balanced. When I asked a bunch of 77- 90 something year old Cubans what they thought kept them strong and old they were like "eat your Potaje's they keep you strong" I'll take their word and my common sense for this one :) 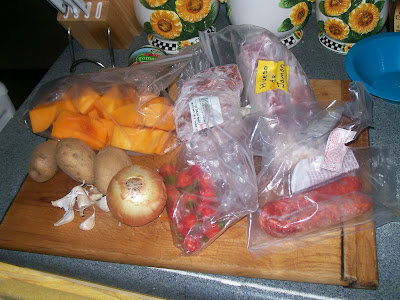 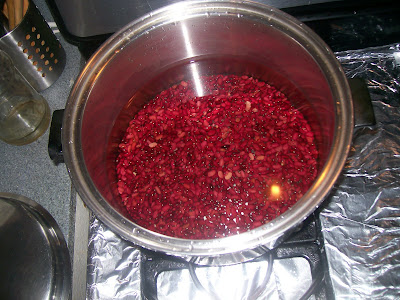 Again I wasn't around for the whole process HOWEVER I have the recipe for those interested and was able to enjoy it when I got home :)

Directions:
(1) Bring soaked beans to a boil, add ham bone and beef stew meat along with the "aji cachucha" peppers. Simmer for about 2 hours or until beans and meat are tender.

(2) Meanwhile heat olive oil, sautee onions until translucent, then add garlic stir and cook until fragrant, add tomato sauce stir well, when it bubbles remove from heat, set it aside.

(3) Add the contents you sauteed to the beans when they are tender, along with cumin, salt to taste (atleast 2-3 teaspoons you may need more taste it as you add if you aren't experienced in cooking or salting food), when it comes to a boil, add Spanish Chorizo whole, and squash with potatoes.

(4) Simmer an additional 30 minutes until potatoes and squash are tender. Turn it off

(5) Remove sausage cut into large chunks and throw it back in the pot stir and your done.

(6) Tastes better the next day :) serve in a large bowl with rice or bread and if you wish a salad.

Here is the piping hot bowl I had when I got home at night :) 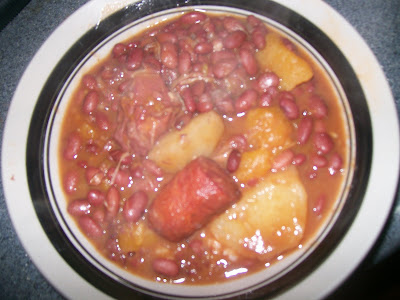 served over rice and then I mixed it all up

PLEASE NOTE:
You can substitute the "Aji Cachucha" peppers from 1/2 of a large green bell pepper left whole then discarded at the end of cooking. An "aji cachucha" pepper is like a habanero pepper but with no hint of burning or spiciness just the pure taste.

I also have other versions/ variations of this red bean stew for this recipe, all also delicious, my grandmother has a preference for using beef over pork in Cuban style bean stews and so do many of her friends because they say it's more "nutritious" here's some other variations I've posted if interested :)

We honestly don't prepare red bean stews exactly the same every time because we like variety or it depends on what looks good at the store or is in our house at the time.

Sonia's Potaje de Frijoles Colorados (Sonias Red Bean Stew) just pork or ham or beef with sausage what makes this one special is the dry white wine, and vinegar
http://nathanscomida.blogspot.com/2010/04/sonias-potaje-de-frijoles-colorados.html 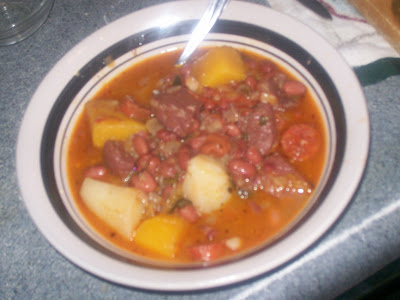 Sopa de Frijoles Colorados (red bean soup) this one is good to make when you want something vegetarian with no meat. Or to just serve over rice with other sides and meats.
http://nathanscomida.blogspot.com/2009/10/sopa-de-frijoles-colorados.html 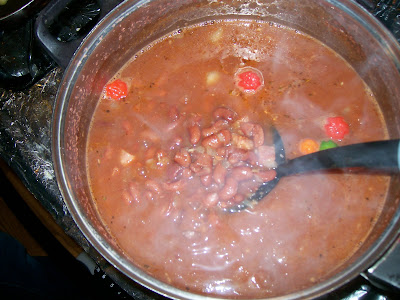 This other one is Marilyn's Potaje de Frijoles Colorados, she only uses smoked ham hock for flavoring and puts calabaza and potato she likes to make like this because since it has no chunks of meat she can serve it as a simple soup over rice and with other sides as well.
http://mycubantraumas.blogspot.com/2008/11/colores-de-otoo-y-frijoles-colorados.html 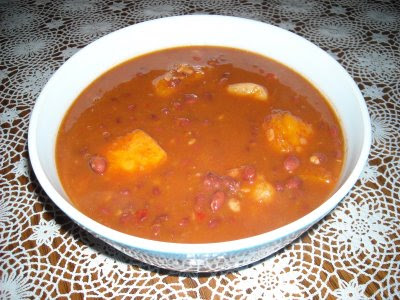 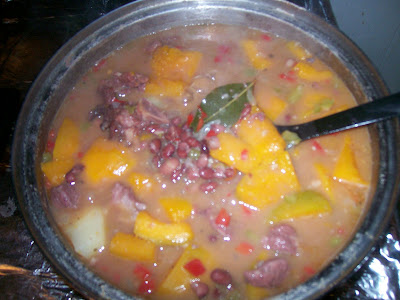 Here's another one I make that I haven't posted made with red kidney beans and everything is boiled from the blog "Cuban Homecooking Keeping the Tradition" alive (this is their picture) it's "Mery's Potaje de Frijoles Colorados" (Mery's version) her's uses lots of smoked meats and sausage, no sofrito but everything in one pot. A good one to make when your feeling lazy or for the Cubans too lazy to make a "sofrito" (haha no offense I do the same sometimes) 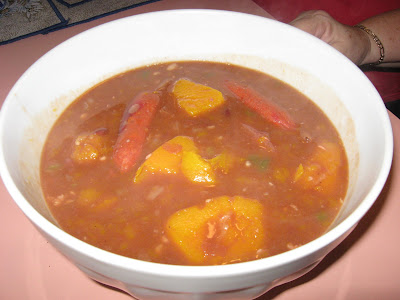