A couple months ago I had bought a bag of black eyed peas that I wanted to use to make "Bollitos de Carita" (Cuban Black Eyed Pea Fritters) but unfortunately I needed a food processor and mine had broken before I was able to prepare them so I wasn't so sure what exactly to do with the black eyed peas.

I had many different idea's, googled around, etc. and what caught my attention was a Cuban black eye pea stew recipe I had found online called "Frijoles de Carita Estilo Guajiro" which was from a book called, "“Delicias de la Mesa - Manual de Cocina y Repostería” by Srta. María Antonieta Reyes Gavilán & Moenck edited in 1925 in Havana, Cuba. I found it interesting and didn't know Black Eyed Peas where used for Cuban stews.

So as the conversation passed my Tata told me she used to make a black eyed pea stew made in a similar fashion but was still different and she added "Calabaza" and Potatoes instead. My grandmas recipe sounded like a winner and I tried it a couple days later and do not regret it, it had become one of my favorite bean stews and I will make it more often from now on. I was exited to make it because I had never made it before or had it in my life, my Dad told me he hadn't had that stew since he was in his fifth teens, and when I made it he said it was just how he remembered it :)

The stew is delicious, filling, and rich. It has Spanish Chorizo, generous amounts of pork meat, a flavorful sofrito, some cuban spices and delicious chunks of potatoes and calabaza, it is just heaven with some hot steaming white rice or crusty bread.

The recipe below makes a large batch so you may want to cut it in half or so, I used the whole recipe it makes about 12-14 large servings but leftovers are delicious and it's a one pot meal.

Directions:
(1)Wash black eyed peas, and put in a large pot and cover with enough water to submerge about 2 inches below water, bring to a boil. 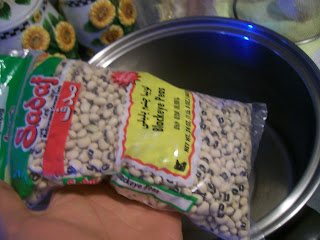 (2)While waiting for the black eyed peas to boil, wash all meat really well several times I wash it several times then rub it with lime juice and salt to further clean it and rinse it again a couple times. 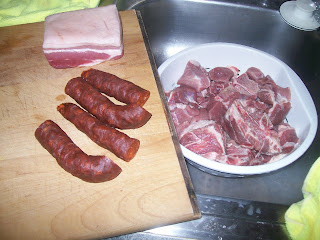 (3)Now when black eyed peas are boiling add the pork neck bones, pork stew meat, salt pork, and Spanish chorizo, as well as 3 teaspoons salt incorporate well, make sure there's enough water to cover the meats. Boil together for about 40 minutes (check if the beans are tender it may take longer) 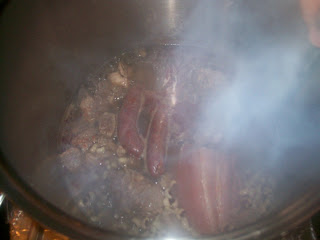 (4)Meanwhile prep the rest of the stuff, start your sofrito, heat a large pan with generous amounts of lard and when it melts and is hot at medium high heat add minced onion and bell pepper, sautee stirring occasionally for 7 minutes, add garlic sautee another 2-3 minutes, add cumin and oregano and a pinch of salt and sautee together 1 minute. Add more lard if it doesn't seem oily enough, now add the tomato sauce and let it simmer uncovered and reduce for about 5-10 minutes more, until the tomato reduces and it becomes thicker and you can see the oil and it has significantly reduced. Turn off heat. It really is worth it in this recipe to cook down the sofrito this much the flavor is well worth it, especially reducing the tomato and intensifying the flavors. 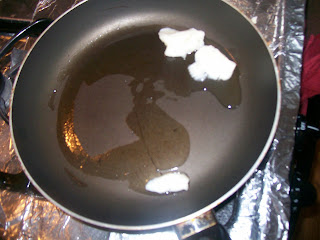 (5)While making the sofrito you can peel and cube the calabaza and potateos and leave the potateos in water so it doesn't oxidize and also clean up any messed in the kitchen. 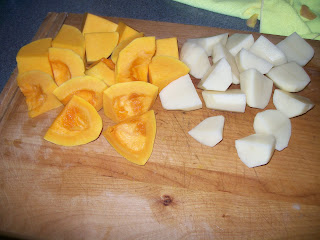 (6)When beans are tender, add the sofrito, taste for salt, mix well and add the calabaza and potatoes, simmer until potateos and calabaza are tender about 10-15 minutes but no more that 20. 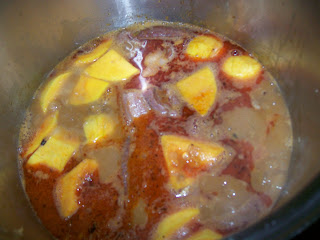 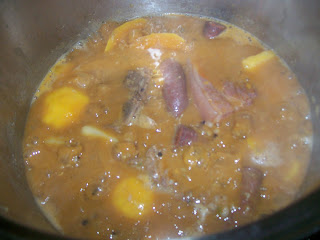 (7)Your done turn off heat, remove chorizo's and salt pork, cut chorizos into small slices and salt pork into small chunks and stir back into the stew. It's ready to serve and tastes much better the next day :) You can serve it over rice or just throw the rice on top or serve the rice on the side. 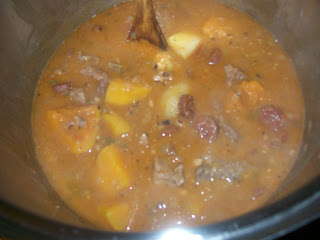 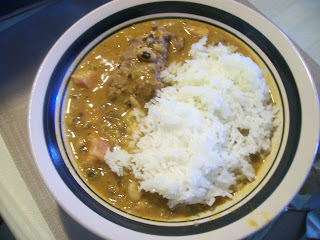 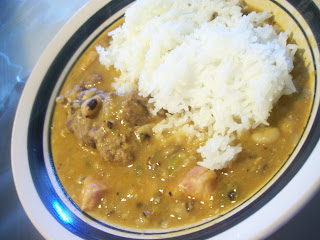 P.S.
You need a really large pot for this recipe I am not kidding if it's not big enough everything will be crushed and overcrowded.

Also do not super over cook the beans you want them to be soft but to hold it's shape to.

Oh yeah I find it interesting how in Spanish we call the beans "Frijoles de Carita" (meaning Beans of face) because the little black figures look like faces? But then in the English speaking world they call it "Black Eyed Peas"? because I guess the black markings can also be thought of as eyes? Interesting how different cultures see things differently.

I recieved this award from Marilyn from My Cuban Traumas, it's called "Premio de Oro" (prize of gold?) her blog feautures some Cuban recipes, and some American stuff and anything she may please or like to share about food, etc. check out her wonderful blog (it is in Spanish)

Here goes mine (About me):
*I am a huge foodie.
*I love to learn about other cultures and am extremely open minded and open to new idea's.
*I am a loving person and will defend those I care for and stand up for them.
*I will always be there for those I love
*I enjoy reading food blogs and sharing my culture through a culinary perspective (duh)
*I don't like sports (sorry)
*I don't watch much television
*I am sort of a health freak, and into my personal fitness, even if I may eat sweets sometimes or lots of meat, I still eat my vegetables, exercise, and don't big out and enjoy both the healthy and unhealthy stuff of course EVERYTHING in moderation.

Hello my fellow foodies I'm back again (very busy with school and so on hopefully in my summer break I will have more time I had a wonderful Spring Break spent in Orland, CA camping with friends for several days, then going to San Francisco and spending about two days there and finally back to my life in So Cal, but I promise as I have in the past that I won't abandon my blog and I still read my fellow foodies blogs quickly even if I don't have time to comment) So again as I promised here is a post, I will keep trying to have something at least once a month.

This is my Tata's recipe (grandmother from my father's side) simple to make, and quick to put together, delicious Cuban style small fried meatballs that are juicy and flavorful and great to serve as finger foods at parties with tooth pics or a simple meat dish to enjoy with your meal with some white rice (always in my rice cooker or leftovers), black beans (we always have some bean dish around in my house), and a simple raw salad (like tomato, onion, cucumber) dressed in olive oil, lime or lemon, and salt.

When we make these in my house we quickly run out of them as everyone can't resist but to get seconds and thirds and so on until they are all gone, they are addictive (common who doesn't like fried meats)

Ingredients:
-2 lbs. ground beef (I use 80% beef 20% fat)
-1 medium onion minced
-6-8 cloves garlic finely minced (mashed to paste with mortar or garlic press)
-1/4 bunch of washed, minced parsley or cilantro
-3 eggs beaten well
-1 cup or 1 1/2 cups cracker meal (it's just crackers that have been mashed up like bread crumbs I eye balled it)
-2 tsp. salt (more to taste)
-1 tsp. ground black pepper
-1 tsp. ground cumin
-oil to deep fry or pan-fry (I use canola oil or lard for my high heat cooking and I pan-fry or deep-fry in it to, any neutral flavored oil will get the job done though)

Directions:
(1)Put ground beef in a big bowl, add all ingredients except oil to the bowl and incorporate gently until everything is just incorporated. DO NOT OVER MIX OR IT WILL BE TOUGH!!! 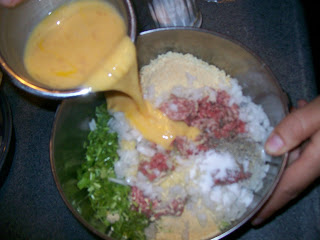 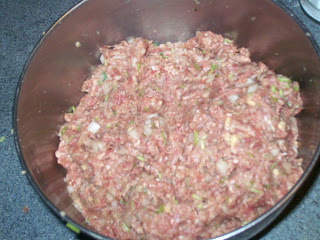 (2)Form into small sized meat balls, do not make them to big or when you cook them the inside will be raw and outside burned. Make them into reasonable small sized not to small not to big. I was able to make about 36- 37 meatballs. 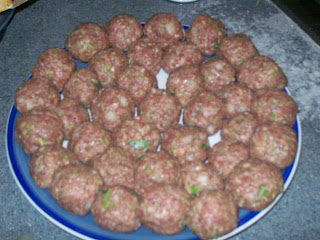 (2)Heat oil enough to pan-fry or deep-fry on medium high heat until oil is hot enough to check dip a wooden spoon or chop stick if it sizzles or bubbles around it, it is ready. Now add meat balls and fry in small batches until really well browned all around. As they fry spoon hot oil over the meatballs and flip when ready to brown on other side if pan-frying. I turn them over with a fork and spoon but I do not stab it. 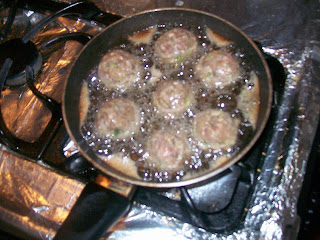 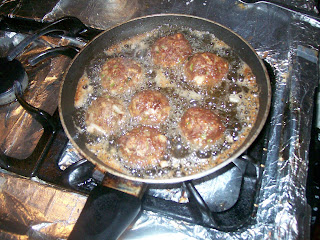 (3)When cooked transfer to a plate lined with paper towels to drain oil and repeat frying process in batches until all done. 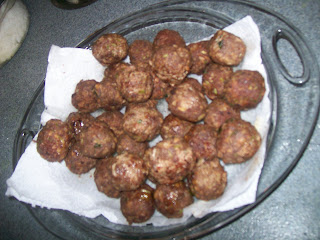 RECIPE NOTES:
1)*The meat mixture can be made in advance and just keep it in the fridge covered until ready to use to form meatballs and fry or you can even form the meatballs in advance and just cover them in the fridge until ready to use
2)*If you have leftover meatballs you can make a Cuban "sofrito" (sautee minced onions, bell peppers, garlic in olive oil, add tomato sauce, some water to form a looser sauce bring to boil and season with some salt and cumin until sauce comes to a boil and simmer cooked meatballs in there for a little bit and serve as a new dish with white rice or on spaghetti)
3)*The leftover oil is delicious to use for cooking steamed white rice it has a delicious flavor but is sinful :)

AWARDS:
-I have received a blog award from Marilyn from "My Cuban Traumas" and also in the past a couple from Karen Brown Letarte and her wonderful blog "Domestic Muse" I apologize for not being able to pick up your awards in a timely manner but I will try to tomorrow pass them on and go pick up my awards :) and I will make a post for them, and maybe if I have more time I will post a new recipe. (right now I am just really tired and it's 1 in the morning and I want to sleep I just had the urge to give my blog a visit and post something to treat any readers out there)