Before I start in Spain "Empanada" is usually a giant meat pie that is baked usually square shaped or round, "Empanadillas" are small meat pies baked or fried usually half-moon shape or round. In most Latin American countries Empanada is used to refer to what in Spain is considered "Empanadilla" or is used interchangeably.

I tried empanada doughs with lard, butter, combinations of lard and butter, all oil etc. The types of empanada doughs I use and am most fond of is the one that's more common in Spain and that is a oil based pastry, that is tender yet somewhat crisp and won't fall apart like a pie crust it isn't crumbly. I like the oil based pastry.

I've been working with various doughs for empanadillas over time to try to find one that I really really liked. I wanted a good dough for making small spanish meat pies in the oven (empanadillas) over time I experimented with various recipes, some had doughs to hard to work with, others hard as a rock when baked in the oven, to elastic, etc.

Today I found the perfect dough for me, easy to work with, flavorful, crisp yet tender pastry.

Ingredients for dough (this dough is only good for oven empanadillas fried it isn't the best- 12/ 9/ 09):
-1 cup oil (preferably olive oil or sunflower oil, but whatever you'd like)
-1 cup water
-1 teaspoonful salt
-3 teaspoons sweet smoked spanish paprika (not essential but makes a huge difference)
-all purpose flour as needed (I ended up using around 5 1/2 cups of flour about 700 grams more or less just depends on the constistency use your judgement)

Ingredients for Filling (anything you want here is links to some of the stuff I use as fillings):
-Fricasse de Pollo (leftover fricasse de pollo shredded up)
-Picadillo Salteado (minus the potatoes)
-Ropa Vieja
-Aporreado de Pollo (Stewed Shredded Chicken)
-Tuna Filling (sautee 1 onions, 4 garlic cloves, 1 bell pepper in olive oil, add 8 oz. tomato sauce, 4 drained cans of tuna, mix and flake into the sautee season with salt and 1 tsp. cumin add lots of mined parsley or cilantro towards end add olives and capers if desired as well as hard boiled egg chopped)

Directions for Making Dough:
(1) In a large pot mix oil, water, salt, and sweet smoked Spanish paprika. Bring to a simmer on medium high heat (don’t let it boil just barely a bubble when you see it barely bubble turn it off) on medium high heat stirring occasionally.) 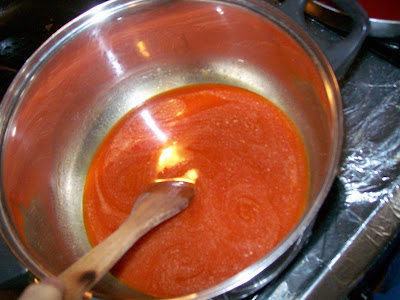 (2)Remove from heat, and stir in flour until it get’s a dough consistency and starts forming a ball and kind of clumping up. 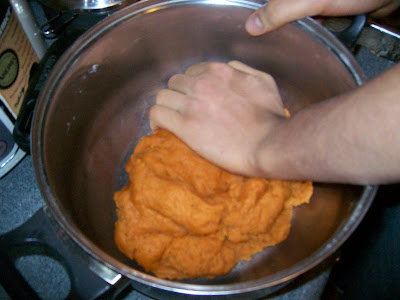 (3)Put it back on the stove on medium heat this time and stir quickly well to incorporate everything. And doesn’t stick to pot. 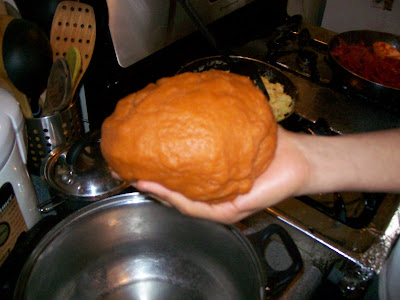 (4)Remove dough and need a bit, put it in a plastic bag sealed leave at room temp. for later use. If ready to use proceed. ( I still leave it in zip lock bag or wrapped in plastic and get dough as needed while I'm making empanadas so it doesn't dry out I forgot to take picture early on so I took picture later when only 3/4 of dough remained) 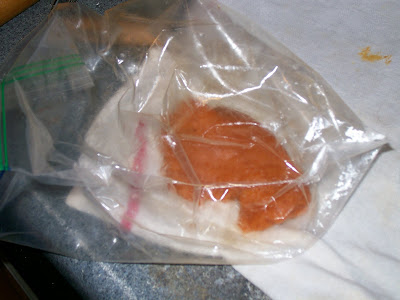 Directions for Making Empanadillas:
(1)On a wooden board, get a golf size ball of empanada dough, roll it out into a circle, thin but not to thin I used a cup to roll it out, since my boyfriend was making some and I let him use the rolling pin (use your own judgement on the thickness, not too thin or they will break) 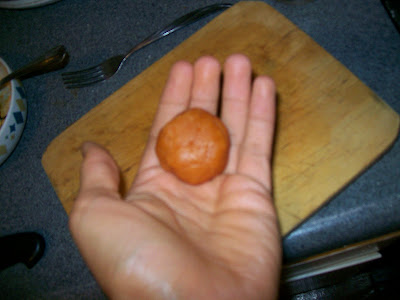 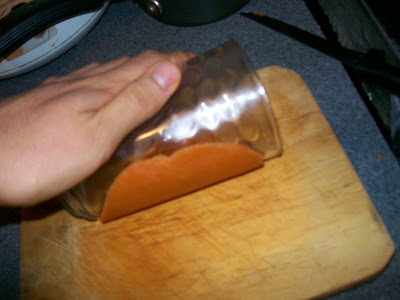 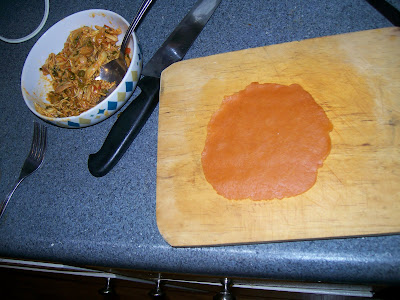 (2) Add about a heaping tablespoon of filling towards the top of the circle. 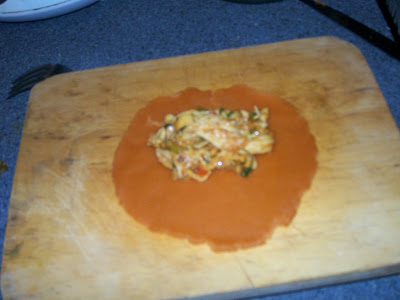 (3) Fold over to the other side making half moon, press dough around it (don’t worry about excess dough just press) then to give it good shape, with a knife push excess dough towards the empanada making it thick and compact, use a fork to give it a nice shape. 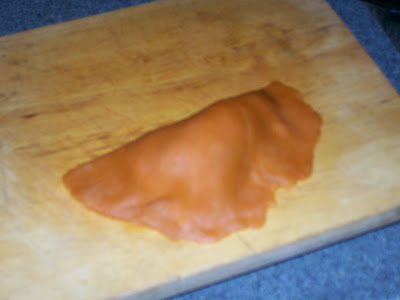 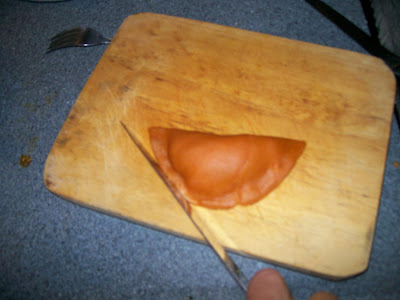 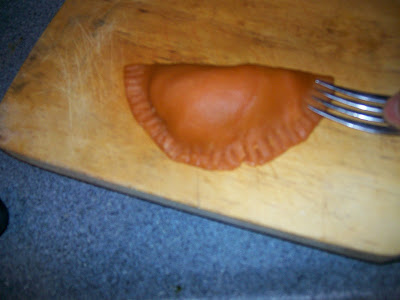 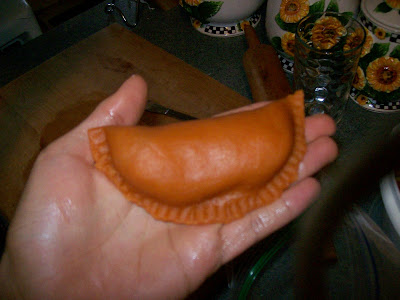 (4) Repeat, when all are done, bake in oven at around 375- 400 degrees Fahrenheit for about 20- 30 minutes (until slightly browned or fully cooked the dough already has great color, but if you wish you can brush it with beaten egg) 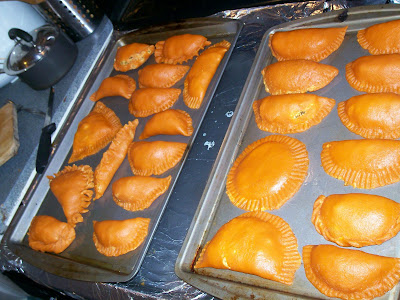 they were actually orange even after baked but brightness of camera made them look yellow... (yes I know I am amateurish) 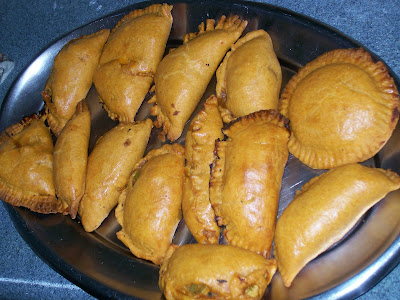 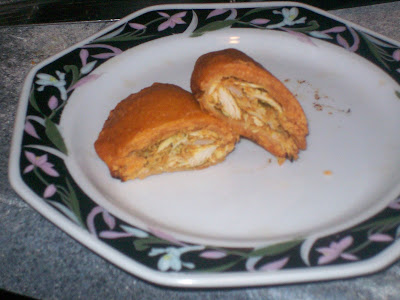 Please Note:
(1) I made 24 empanadas I saved 12 already assembled empanadillas (but not baked just assembled with filling and all) in the freezer, the 12 I froze I will fry them some other day that I don’t feel like cooking to much, I have no clue how this dough will be fried so I’ll update you guys, it’s good in the oven but might not be the same for frying so stay tuned 

UPDATE VERY VERY IMPORTANT (12/ 9/ 09) this empanada dough is only good for baked empanadas, I tried frying some and the texture is crumbly it doesn't bubble or puff. The best dough I've used so far for frying is one of Pilar Lechuza's recipes "Empanadillas Fritas" (small fried spanish meat pies):

(2) Also please excuse some of the odd shaped ones, this time I was good at making empanadas and my boyfriend flet like experimenting with the dough making different shapes, made some to thin, and some looked messy…

(3) You can infuse the dough with sofrito flavor and the fillings flavor, sautee the aromatics for the filling in about 1 1/2 cups oil, add the meat or seafood sautee, then drain the filling on a colander to get oil now the oil you retrieve is flavorful and the dough can have the flavor of the filling.

IMPORTANT:
*This dough is a combination of Margarrete's recipe for Empanadilla dough (click on link below):

and a combination of Gertudis recipe which I saw in video format on youtube (a woman from Murcian region of Spain) link for video 1 and 2 see below:

ALSO here is one of my favorite fried ones I learned from Pilar Lechuza: