Pork is stewed in a savory flavorful tomato based sauce that is very smokey and rich, the smokiness comes from freshly ground black pepper, the wonderful fragrant smoked sweet and hot Spanish paprika that gives Spanish chorizo's it's signature taste, the richness comes from the rendered pork fat and chunks of meat to finish potatoes, carrots and green beans are simmered in the sauce to make this a complete one pot meal that can stand alone, or marry with rice or bread.

I came up with this recipe myself on Saturday morning. I had no idea what to cook for Saturday when I was planning on Friday night. I didn't want to making a simple Cuban "Guiso de Carne de Puerco"/ "Fricasse de Puerco" (Cuban Pork stew/ Pork Fricasse) or a "Lechon Asado" (which I will post in the future) I was still craving a tomato based dish since the weather was a little chili. I was also wanted to use the delicious smoked sweet and hot spanish paprika my friend IDania sent me from Spain (I thank her a million, it was so nice of her I truly appreciate).

So I thought hey I'll make something similar to "Guiso de Carne de Puerco" but instead use the paprikas I recieved and add some carrot and potatoes the way I make my "Fricasse de Pavo" (turkey Fricasse) then when I was adding the carrots and potatoes my mother told me, "Hey you can add green beans that way you don't have to make a salad or tempted to make other vegetable sides if your tired, you know my mother when she made "Carne Con Papas" (beef stew) for her Iranian boss, he told her to add green beans, he liked it that way because in their culture theirs a meat stew that incorporates green beans you should try it" (she told me in Spanish I just translated) so I ended up adding green beans. And that's the story of how I came up with this dish :)

I loved the end the result and hope some of you guys give it a try :) 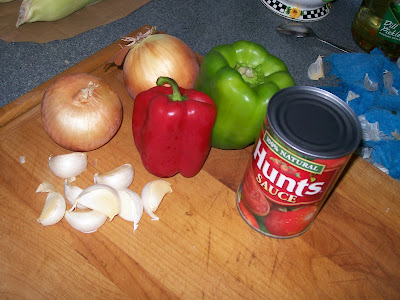 Directions:
(1) Heat a very large pan (I mean large I used a "Paellera" to cook this, which is those giant pans used for making "Paella" which is Spanish yellow rice with seafood and sometimes meat.) Heat the pan on very high heat, you can test it by splashing some water, if it screams and dances it's hot.

(2) Melt very little lard to barely coat the bottom of the pan, when it almost smokes from the heat add pork in one layer, generously season now with salt and pepper and don't stir. For awhile until browned on one side.

(3) Meanwhile you can prep while the pork is browning and chop and take out all the other ingredients. While pork is browning after awhile maybe 10 minutes, start stirring occasionally until any released liquid evaporates and let pork render all it's fat and brown all over. 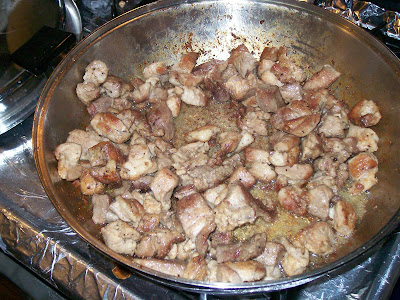 (4) Set pork aside and lower heat to medium high, you should have generous amounts of rendered pork fat that is delicious, now add red and green bell peppers as well as onions until fragrant stirring occasionally about 5-7 minutes, then add garlic and stir for about 2 minutes until very fragrant but don't burn it. Now add sweet and hot smoked spanish paprika stir 30 seconds and quickly add wine to reduce and deglaze the whole pan, now add tomato sauce and bring to a rolling boil, stir a bit then when thickened and reduced add about 3-4 cups water. 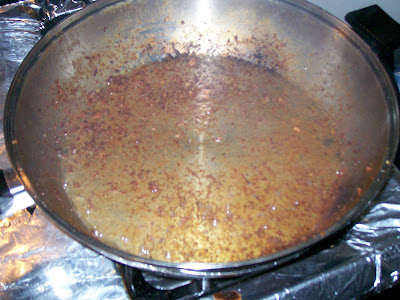 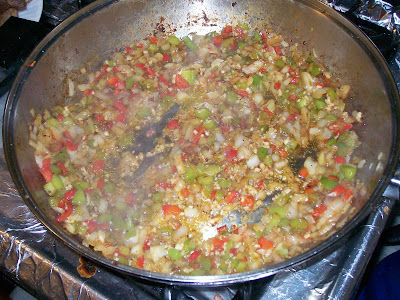 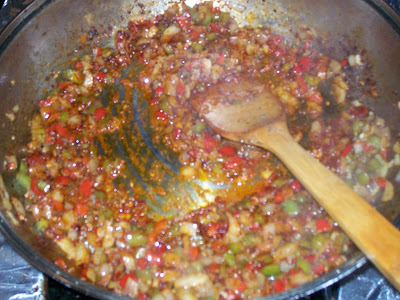 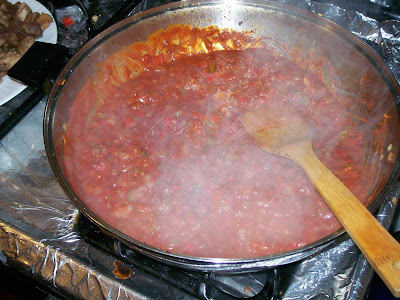 (5) Now bring all contents in pan back to a boil, and pork meat back along with some bay leaves and at this point add the msg if using. Cover and boil for about 35- 40 minutes until tender. 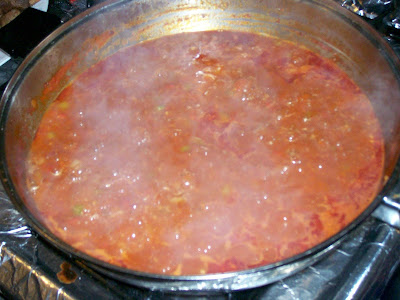 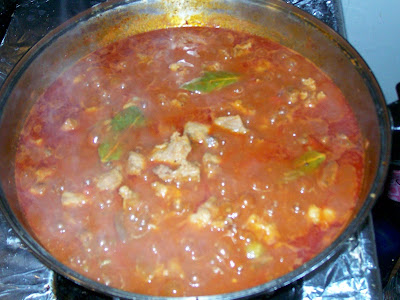 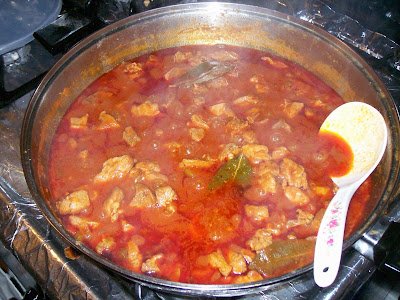 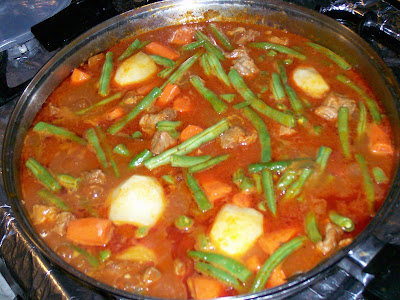 The potatoes absorbed some of the liquid so it reduced, if you want more sauce than add a bit more water but remember to salt more if you add more liquid. 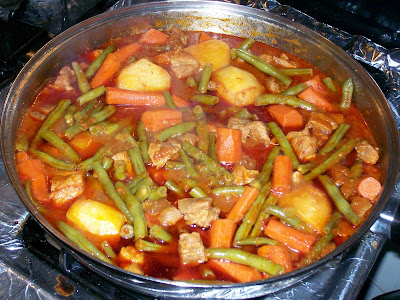 (7) Now turn off heat and ready to serve. You can eat it with some fluffy white rice or yellow rice, or even just in a large bowl with some delicious crusty bread (bolillos, french bread, Cuban bread, your choice I love those though) Heck you can add maybe another potato or more and make this meal stand alone without rice or bread.

Monosodium Glutamine is optional, I know some people are strongly against it, if you are then simply skip it. It is used in Asian cooking and Cuban cooking uses it under the brand name "Accent" or when they use powdered "Goya Sazon" packets to enhance dishes. Also in Latin America it is used without them knowing many use "Knorr" or "Cubito Maggi" and other powdered chicken and meat bouillons that produce the msg taste and are blended with it. In Spain it is sometimes used as"Pastilla de Pescado" or "Pastilla de Carne" which is like instant broth. Msg produces the flavor "umami" which is giving the sense of a meaty or brothy taste. I am guilty of using it sometime.

Also the flavor is produced by free glutamines which is natural in certain stuff like meat, tomatoes, mushrooms, eggplant, yeast extract as well as cured meats and sausages.

It's up to you, I personally don't have an allergy to it, neither does anyone in my household. Some are sensitive to it some aren't.
Posted by Nathan at 3:05 PM 7 comments: