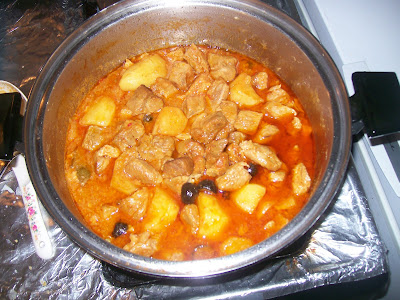 I had a good chunk of pork meat, well marbled good for stewing so I was planning on
making a stew with it, but not sure how I wanted to make the stew

I wanted a Cuban or Spaniard tomato based stew, and I knew the variations were endless.

However I remembered that some Cuban restaurants have something they call "Fricase de Puerco" which is a pork version of the Cuban "Fricase de Pollo/ Chicken Fricase" (which is chicken stewed in a tomato based sauce, traditionally/ typically chicken is marinaded in garlic and citrus first, browned, cooked in sauce and is somewhat sour with olives sometimes some capers but often balanced by stewing with the addition of raisins or sometimes instead of raisins some people add sliced carrot or leave it as is without the sweetness)

So here's my way of preparing a cuban-style "Pork Fricase" and let me tell you it came out delicious!!!! What made it special was marinading the pork in sour orange and garlic giving it that special cuban garlic sauce taste, but it married into the typical tomato based sauce made with the holy trinity of Cuban cooking (onion, bell pepper, garlic) the two married and gave birth to this, it was just amazing :D

-Ingredients to marinade pork-
-3 lbs. boneless pork shoulder cut into 1 inch cubes
-3/4 cups sour orange juice (you can substitute with 1/2 cup orange juice, 1/4 white vinegar or a mixture of 1/2 lime and 1/2 orange juice)
-1/2 head of garlic, peeled, mashed to a paste in a mortar or through a press
-2 tsp. salt

-Ingredients for for the rest-
1/2 cup lard or extra-virgin olive oil (I use lard for this)
-1 onion chopped
-1 bell pepper (red or green or both) chopped
-1 can 8 oz. tomato sauce
-1/2 cup dry white wine
-3 cups water
-2 bay leaves
-1 tsp. whole black peppercorns (or black pepper to taste)
-1 tsp. ground cumin
-4 potatoes, peeled, cut into chunks
-7-8 olives cut in half (black or green spanish olives)
-4 tablespoons capers (optional)
-1/4 cup raisins (optional)
-salt to taste (towards the end because the olives and capers tend to be very salty, also the wine depending what you use, like if you use a typical cuban cooking wine like Goya or Edmundo it also has salt)

Directions:
(1) Mix pork with all marinade ingredients allow to marinade at least 2 hours. When done marinading drain it BUT reserve the marinade, pat the meat dry.

(2) In a large pot, heat lard on very high heat, when it's real hot, add pork and brown on all sides (do not panic if the pork releases some juices and everything starts boiling, leave it uncovered and stir occasionally until everything reduces and it starts browning)

(3) When browned add bell peppers and onion and cook until translucent, add tomato sauce stir well and when the tomato sauce bubbles throw in bay leaves, peppercorns, and cumin, along with wine, and water. Bring everything to a boil and simmer for about 1 hour.

(4) When pork meat is tender (to check doneness pierce with a fork) add your potatoes, olives and the optional capers and raisins bring back to a boil on high, and cover simmer on medium low until potatoes are tender (about 20 - 30 minutes) turn off heat and it's ready to serve over rice :)

PLEASE NOTE:
(1) For a very delicious variation, cut your potatoes into large cubes, and deep-fry them on medium high heat until inside is tender, and then crank the heat up and get them all well browned, drain and set aside. When the meat is fully tender, turn off stew and toss it with the deep-fried potatoes.

I learned that technique/ variation in these type of stews from "Maruxa Moíño" a wonderful home cook originally from Galicia, Spain now residing in Catalunya region of Spain. Her son created a blog documenting and making videos of her home cooking. So a big thanks and shout to them :)