This is my mother's recipe, it is a Mexican dish (well since she is Mexican and I've seen this stew at other Mexican households but it's not as good in other places), I helped her cook it today. It is extremely healthy, it is a stew with a variety of vegetables, in which meatballs flavored with fresh mint are simmered, then incorporated well into the stew.

This stew is eaten with just warm corn tortillas, and the stew on the side. It's flavorful, soothing, very easy to digest yet satisfying BUT I eat it with just a bowl of rice because I like rice better.

It has a vegetable that maybe other's aren't to familiar with it's called "Chayote" it is a potato sized, pear shaped, vegetable with a light green outside, it's inside is starchy yet it sort of reminds me of a Cucumber in flavor, it's hard for me to describe because it has a really light taste. It is also used in Cuban cuisine, my grandmother would buy a variety of it that was larger and had spines, but she would steam it, peel it, and serve it with "Mojo de Ajo" 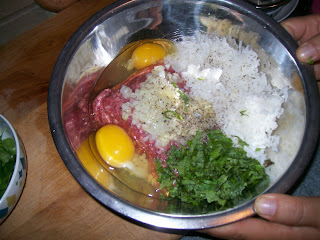 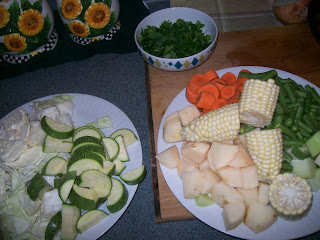 Directions:
(1)Mix all the meatball ingredients together, form into medium small meatballs or whatever size you want BUT DON'T MAKE NO JUMBO SIZED ONES. Set aside. 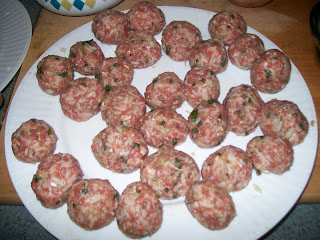 (2)In a large pot, heat oil on medium high (I use olive oil, lard is more traditional here) then sautee onions until translucent, add garlic sautee til fragrant, now add tomatoes chopped until they release some juices and cook a bit. 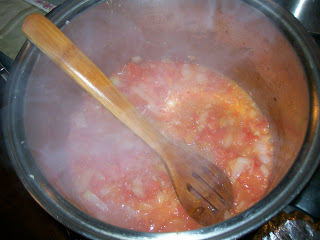 (3)Add water (you may boil water before you even start all this to have hot water ready) so add water to sautee and bring to a boil. 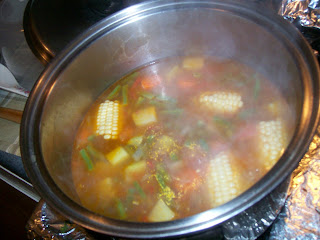 (5)Now add cabbage and squash, cover and simmer for 5 minutes.

(6)Now stir in spinach and cilantro, add more water if necessary. Stir in until it starts wiling. 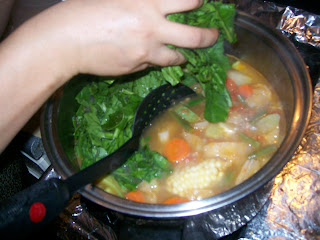 (7)Carefully place meatballs over into soup over the top, DO NOT MIX IN or the meatballs will fall apart, so cover and let them steam for 5 minutes, now they will be firmer, so you may CAREFULLY fold them into the stew let them boil in the stew another 5 minutes. To check if meatballs are done, take 1 out and cut in half if the center is cooked it's done. 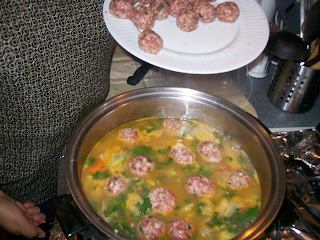 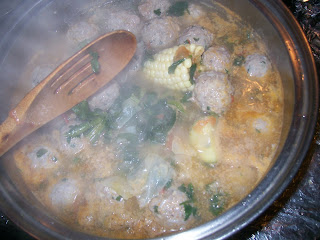 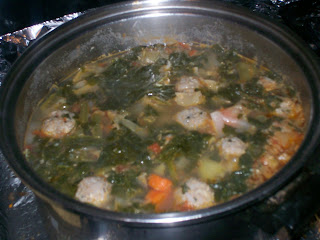 P.S. Towards the end of this month my grandmother from my mother's side (whom is Mexican) is coming, so expect lots of new Mexican recipes added to this blog I will be learning plenty more! (My other grandmother who is Spaniard/ whom settled in Cuba then USA is from my father's side just to clear up any confusion :)

ALSO: If you can't find "Chayote" feel free to make the stew without it, the spinach is optional. People from "Yucatan, Mexico" like to add 2 tablespoonfuls of chipotle in adobo sauce to this meatball stew to make it spicy, we don't. Also we don't make this to watered down in my house, poorer or stingy people like to make this stew very watered down were it's to the point of fishing for the vegetables and meat in a huge lake ha ha! The other reason could be because some people just like it really soupy like they like eating the soup then drinking lots of hot broth.

Nathan,
I have seen Mexican Meatballs Soup very watery, I like yours better!
You use raw eggs to make the aioli?
I am terrify about salmonella!
Part of my OCD =)
Saludos!

Marilyn,
Thanks :) well I don't know what my OCD is, probably cooking to often.

Well I think the raw egg when I use it for alioli that the acid in the vinegar kills the salmonella, not sure though I'm just guessing here.

It's like when some Cubans make "Creme de Vie" (the Cuban egg nog) they use raw egg but probably the alcohol in the rum kills it.

Oh gosh in Mexico some people drink Coca-cola with raw egg beaten in, or just raw egg straight as a snack.

My grandmother likes to consume egg yolks with red wine she say's, "Me enriquece la sangre" (makes my blood richer) she probably say's that because the yolk is nutritious and red wine is good for the heart in moderation who know's.

Hello Nathan, its good to see young men learning how to cook, i am teaching my sons how to work in the kitchen, just in case they marry a girl that does not have a clue how to boil water :). My family is from Spain, Guatemala & Mexico so i got the best cooking recipes in me. I was just cruising around the web site for different ways to make Mexican meals, sometimes i get bored of my same old food. I am very open minded to try other peoples recipes, so young man feel honored that i will make your family's Mexican recipe soup this Christmas eve in my home. I am having close family members joining us this Christmas so i want to make all the delights of the season that god has to offer us. By the way i am 51 and i have been cooking since i was 5 years old when my mother put a bowl on my lap to help her make my first Tamales :)
Take care Nathan, and i will let you know how my family liked your Caldo de albondigas.

Merry Christmas to you and your family

mspollyanna,
Thanks, I hope you like it let me know what you think and be honest :)

Hello Nathan, your soup recipe was a hit with all my quest on Christmas eve everyone came back for seconds. Thank you for your recipe now i am planning for my new years eve party i am making a turkey tenderloin with garlic mash potatoes and peas. Have a wonderful new year and my best wishes to you and your family :)

mspollyanna,
Glad everyone enjoyed it, my mom made this soup a couple day's a go, but she made it in a more "not authentic" way, she went creative and added some "Cuban" flare to it, it was really good.

She made the same recipe but replaced "Yuca" for the Potatoes, she added "Goya Sazon Con Culantro y Achiote" to the soup and she seperately boiled some yellow plantains with black spots to add to the soup when done cooking. It was really good like that to.

What a great recipe. I like your technique about letting the meatballs simmer on top: this let me skim the fat from the beef without it getting too foamy. Healthier!

I didn't have mint, so I used some thai basil from my garden instead. Thai basil is a little different than normal basil and has a spicier, mintier flavor. Because I felt the herb flavor was going to be missing without the mint, I also substituted green onions for the onions in the meatballs.

This let me add a little more onion to the base: I used one small yellow onion, one small red onion, and a shallot because I like them in soup.

The shallot and red onion are sweeter so I squeezed one half of a lime in to balance the flavor.

I didn't use chipotle either but I seeded and veined one jalapeno and put him in with the onion.

Where I live -- Texas -- it is easy to find choyote. I have family in Brazil and we call this chu-chu. Brazilian food is like Cuban food so I am not surprised to find it in the recipe.

I used two green calabazas for the squash, and not yellow ones. Also I added another piece of corn because they were small and my wife likes corn. So then I said why not and added a little more carrot. Since I did not have fresh tomato on hand I used canned whole tomato and put in the whole 11 oz.

Also I used organic chicken stock instead of water. Normally I make my own flavorful stock from chicken feet but this time used a box. Maybe that scares everybody but the chicken feet are appreciated outside the US, I don't know about Mexico.

Anyway the soup was really good and my whole family liked it. Thanks for sharing the recipe and the technique!

Anonymous,
Thai Basil sounds delicious, I'm familiar with it, and I never thought of skimming the fat but yes that's a healthy idea,thanks for the feedback :) & yes Chicken feet are appreciated in Mexican cooking by some, I had them a couple times growing up, and down here in Southern California for those that like Chinese food and the Asian population chicken feet are loved as well :)