Different countries have their own version of "Arroz Con Leche" and different cooks have their own personalized versions. It varies greatly, even in flavor and texture, the common thing is there's always a dairy and rice.

So what makes my grandmother's version worthwhile and delicious? Well it's so rich, creamy, and dense infused with a light lime or lemon flavor and cinnamon flavor. It incorporates whole milk, velvety evaporated milk, and rich creamy sweet condensed milk... as if that wasn't enough the butter gives it an unsurpassed richness and density. The short grain rice also makes it more creamy, more like risotto. 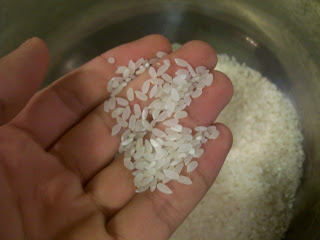 Directions:
(1)In a large pot put rice and wash rice well, wash and drain about 3-5 times until water runs clear.

(2)Add water, salt, lime peel, and cinnamon stick, bring to a boil on high heat (stir occasionally while waiting for it to boil) once boiled stir, cover, and let simmer on low heat for 25-30 minutes on the lowest heat until rice absorbs water. 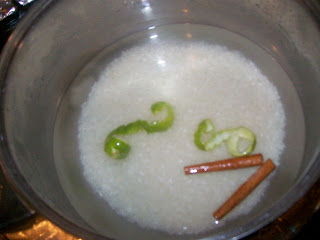 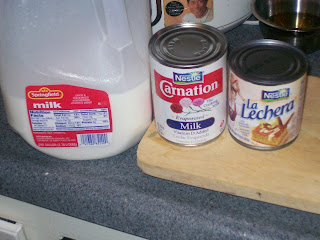 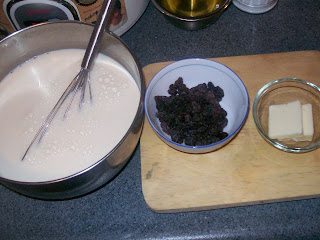 (4)Once the rice absorbs all the water, slowly add 3 milks mixture and stir in , bring heat back to high heat, and stir every 5 minutes occasionally until milk comes to a raging boil with the rice. 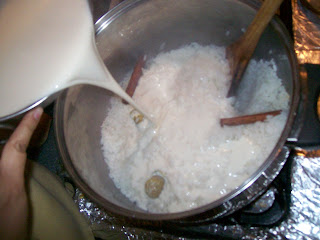 Trust me at first it will feel like you added to much milk but the rice will absorb a lot of it and thicken with time. 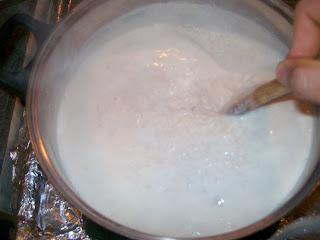 (5)Lower heat to low and stir occasionally for about 10 minutes total. After 5 minutes of of boiling on low the rice should have absorbed some of the milk and thickened a bit, check if grains are tender, add in white sugar, stir well, taste and see if you want to add more sugar to taste. 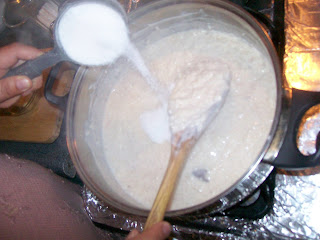 (6)At this point let it cook an additional 5 minutes, add the butter towards the end, and add the raisins to stir until everything is well incorporated. 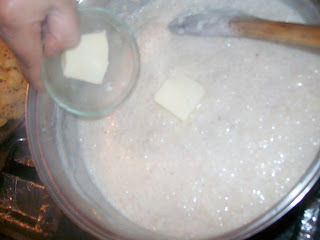 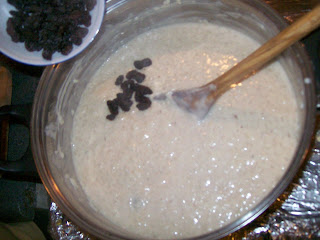 (7)Turn off heat and dust lightly with ground cinnamon. (Your probably wondering why I have 1 pot and 1 other ceramic filled with rice pudding the reason is my father and little sister do not like raisins, so before adding the raisins I set aside some without raisins for my Dad and sister and whomever else may want to eat it without raisins) 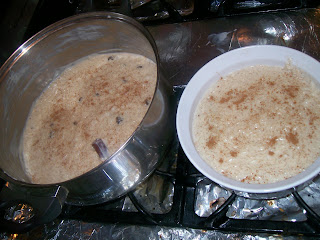 This can be eaten as dessert at any temperature desired, it can be eaten hot, warm, room temp., or cold, it doesn't matter it's whatever you like. In hot day's I like it cold, in the winter I like it piping hot or warm. You can serve it in individual bowls and dust with cinnamon on those or like in my house we just make a big batch and everyone just get's their own bowl and goes help themselves. You can also eat this as a snack or heck even a big bowl for breakfast or late night meal ha ha.

Also, in case your wondering why I call my grandma "Tata" it's because she say's that's what they called grandmas in her family grandpa was called "Tato". I went to do some research and it came up that it's sometimes used in Madrid, Spain by some to refer to grandpa or grandma, it is used when the child is to young to properly say grandpa or grandma I think that's what came up, I don't know, some Cubans also call their grandma "Tata" and some Spaniards do to., I'm grown up well kinda and still call my grandmother "Tata" and she'd kill me if I called her anything else she say's "Abuela" (Grandma) or "Abuelita" (Granny) make her feel old.

REALLY IMPORTANT NOTE!:
*If you want to speed up the cooking time, while the rice is cooking with the water for about 25-30 minutes or so, you can mix the 3 milk mixtures and bring it to a boil then leave it on really low heat, that way when the rice has absorbed the water and you have to add the milk you won't have to wait long for the milk to come to a boil, after it boils you'll be done in like 10 more minutes.