This stew is a very healthy, nutritious and nourishing, it is a stew with beef bone and meat, with a large variety of different colored hardy veggies and for some body some starchy plantain, cassava root, and potatoes. Sure to revive anyone and make you feel stronger. As they say in spanish, "Levanta muertos" (raises the dead). Ha ha.

This recipe is from a Salvadorian family friend, we call her "Tita" and she cooks amazing delicious food, she is elderly and kind, when I learn from her it's like learning from a grandmother. Her cooking though she cooks Salvadorian many of her dishes are unique to her because they are clearly strongly Spanish influenced because her grandparents from both sides of the family are Spaniard born, both her parents where born in El Salvador from Spaniard immigrants, it is even evident in her speech which I find interesting because she uses typical Salvadorian word usage and slang but her accent is Castillion so I have fun listining to her :)

I also have a 1/2 sister (media hermana) from my father's side whom is 1/2 Salvadorian and 1/2 Cuban Spanish, she also makes this Cocido but she does it differently (she probably won't read this so I feel safe to say that I find Titas version to be tastier than my sisters ha ha, my sister's is more straight forward and excludes some stuff that I feel give it more "oomph") also she doesn't do much cooking anyways, and heck she doesn't read my blog shame on her ha ha she would probably learn a thing or two about our culinary heritage (atleast our Cuban and Spanish side) you know I believe you can know a culture very well and preserve it through their/ your food :) 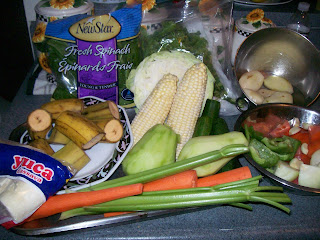 Directions:
(1)In a large bowl wash meat and bones and drain several times, squeeze in lime juice, and add a lot of salt, rub the meat and slowly add more water wash meat with limes and water, then drain and rinse again. (you will do this about 7 times) rinse meat well until you wash away the lime and salt. 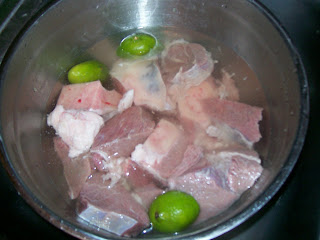 (2)In a really large pot (I mean really big) bring to a boil enough water to submerge meat about 6-7 inches in water. When water comes to boil add meat, let boil for a bit maybe 5-10 minutes, when the scum from the meat comes up, remove it, scoop it out.

(3)Once most scum rises up (very little will because we washed meat so well), now add chicken/beef bouillon, salt to taste, bay leaves, black pepper, ground cumin, celery, onion, tomato, garlic, and green bell pepper. Cover and boil on medium low for about 1 hour and 30 minutes. 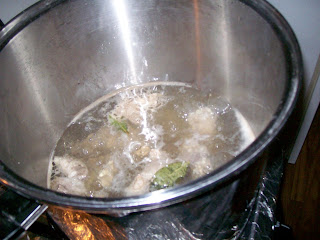 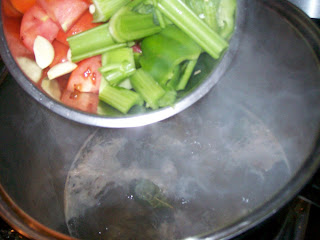 (4)Check meat for tenderness keeping in mind it will cook for another 30 minutes with the stuff added later. You should have a golden rich stock. Now add carrot, chayote, yuca, corn, potatoes, green beans (if using optional) and plantain. Let it boil 15-20 minutes 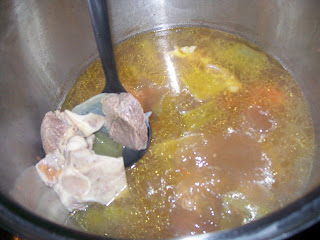 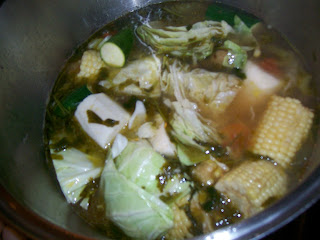 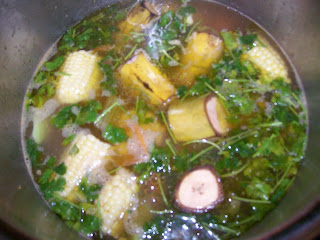 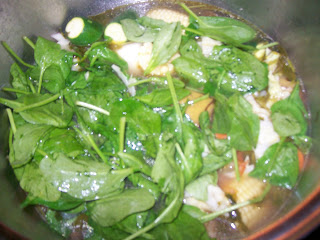 (6)Turn off heat your done, serve in large bowls, with some freshly squeezed lime and if desired a hot sauce on the side to add in on your own serving plate. 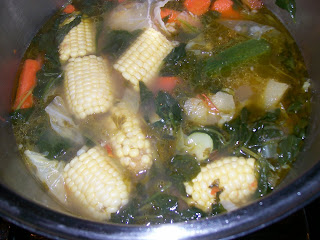 PLEASE NOTE:
-Everything for this stew should be cut in really large chunks, it's a hardy soup, the chunks are large you should only need 1 piece of each thing and broth to fill your bowl. It is purposely like this.
-The plantains after cooked are usually taken out and peeled, people add it to their stews from the plate.
-If you over cook some veggies may disintegrate, nevertheless don't get upset it's still delicious :)

VERY IMPORTANT
-Chances are if you do this late for dinner you'll be to tired to put away the stew or it might be to big and you don't want to take up space, here is a helpful tip I learned from my mother I don't know the scientific explanation, but if you don't want it to spoil but still leave it out for the night do this.
(1)Bring it to a strong boil (it has to boil evenly), after it comes to a strong boil let it boil atleast 5 minutes.
(2)Turn of heat DO NOT TOUCH AND DO NOT STIR IT LEAVE IT ALONE, DON'T MOVE IT, for some reason the next day it will not be spoiled the next day, but if you touch it and stir it will spoil, pretty cool isn't it.
(3)This trick works with any type of bean stew and other stews, when you ready to eat again, bring to boil and consume :)
-This is a large recipe, we like this soup so we have it for like 2 days, if you wish cut the recipe in 1/2 more and use your judgment.
Posted by Nathan at 7:25 PM 8 comments: