This is the Cuban version of "Liver and Onions" it's simply seasoned marinaded beef liver steaks cooked quickly then in the drippings we sautee lots of onions cut into rings and smother it. Usually serve it with thick cut homemade french fries and white rice (that has been steamed with a little salt and some olive oil) and some limes to squeeze over the liver when eating it.

This recipe uses the SAME EXACT ingredients as "Higado a la Vizcaina" which is a liver, onion, and potato stir fry. The only difference is the procedure and the amount of certain things which creates a totally different feel to the dish and everything is mixed.

Very important for you to know this dish has to be served hot just after cooking as soon as possible for it to be it's best. In my home we already have the plates warmed the hot rice served and the french fried as well as the table ready, that way we just fry the liver steaks and immediately put on plate hot and family can get it and sit down to enjoy it hot, while cook the onions quickly and serve it over liver.

Ingredients:
-1 ½ lbs. beef liver
-6-12 cloves garlic (pressed through a garlic press or mashed in a mortar to a paste)
-1 or 1 1/2teaspoon ground cumin
-1 1/2- 2 teaspoons salt or more to taste
-3 tablespoons white vinegar
-2 medium red onions cut into medium thin rings
-4 or 5 medium russet potatoes peeled and cut into thick juliennes
-salt to taste
-Oil to deep-fry, brown and sautee stuff
-4 limes or more (depends how much you use to serve and like squeezed over it)

Directions:
(1) Beef liver washed, cleaned, remove nerves, silver skin, and fat leave as clean as possible even if you must waste some of the liver meat. I buy 1 ½ lbs because I end up throwing ½ after cleaning. HUGE TIP when buying liver make sure your butcher shows you all sides of it because if the entire back area or not seen area has lots of nerves and holes IT IS NO GOOD tell him to get you another because nerves and other bad parts curl and give a very hard texture sometimes. UNLESS YOU ARE POOR PLEASE JJUST CLEAN IT WELL AND REMOVE ANY QUESTIONABLE AREAS THE FINAL RESULT IS WORTH IT.
(2)Now marinade the liver by adding the ground cumin, salt, garlic, and vinegar and mixing it all well together. Cut the onions into rings and place over marinading liver. Close and seal well in whatever you put the liver in and marinade around 1 hour (if your in a hurry you don't have to marinade it and just season and continue, but marinading will give best results for this) I KNOW THE LIVER LOOKS GREY IN THE PICTURE BUT IT'S NOT BECAUSE IT IS BAD SIMPLY SINCE I TOSSED IT WITH THE VINEGAR THE VINEGAR IMMEDIATELY DESTROYS THE DARK RED COLOR AND STARTS TO WORK INTO THE MEAT WITH IT'S ACID. 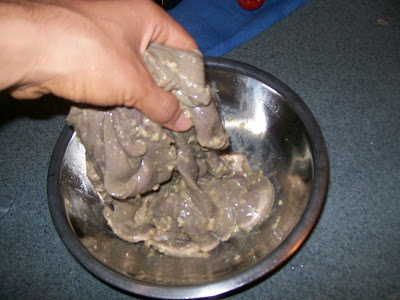 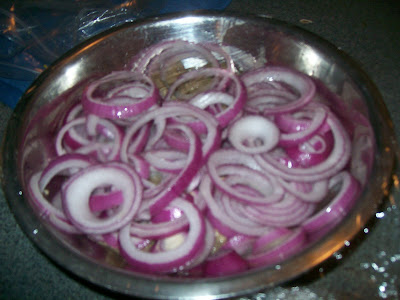 (3)Get the potatoes peeled and cut into thick, put them in a bowl with water. Heat enough oil on medium high to deep-fry or pan-fry for about 5 minutes more or less, to test it you can dip the end of a wooden spoon if it bubbles or sizzles oil is hot enough. Now drain the potatoes well and pat dry. Add to oil to fry in one layer, but it's okay if you have to crowd some in (I did) let this fry on medium high uncovered for about 20 minutes every 7 minutes you can move around and turn them until golden. Then drain and set aside on a plate with paper towels uncovered and lightly salted. Set aside. 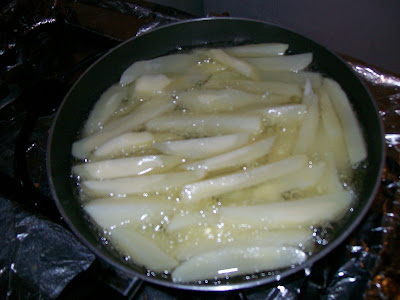 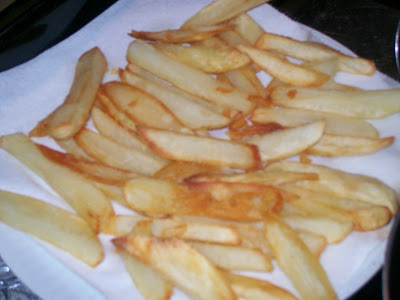 (4)Now that potatoes are done, get you liver, heat a skillet or wok on the highest heat you have available, heat the oil until you see a small whiff of air or breath (like steam sort of like smoking it's very slight and light) it has to be hot, add the steaks in one layer, fry until well browned and cooked on one side then turn, if your unsure if it is fully cooked feel free to cut an opening to check if it's done. You may need to cook in probably 2 batches if your wok or skillet isn't big enough (I did because I had 6 medium liver steaks). 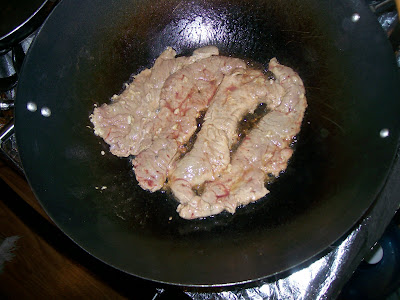 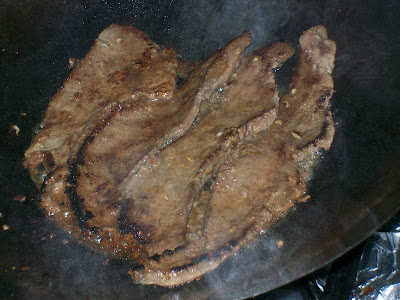 (5)Quickly set aside and add a little more oil, sautee the ringed onions from the marinade until it get's rid of raw taste deglaze pan with some fresh squeezed lime juice (have on hand). 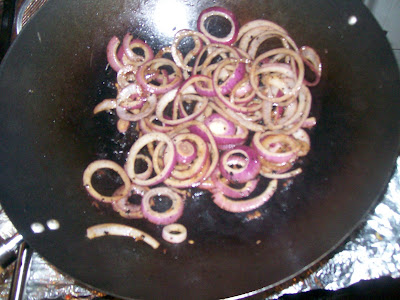 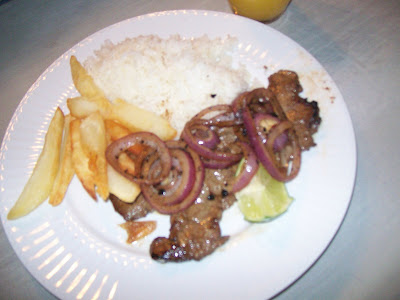 P.S. Very comforting Cuban meal, you could serve with a raw salad of your choice (usually thin sliced into rounds or half-moons cucumber, tomato, onion, lettuce dressed in olive oil, lime, and salt. My mom likes to mash 1 garlic clove to a paste and add it to the salad dressing for a garlicky taste similar to Mojo de Ajo but a very light version) but then again... potatoes and onions are veggies why eat salad (or so I tell myself ha ha)

ALSO you could serve it with some Cuban Black Beans but I didn't because I had for lunch a huge bowl of leftover "Potaje de Frijoles Colorados" (Cuban Red Bean Stew) so now more beans for the day :)

On seperate note Joan Nova from a blog called "Foodalogue", I would like to give her a "thank you" on my blog for presenting me with this "cute" award:

It's purpose is simply to show appreciation among food bloggers,

Thanks now I feel more special ha ha. I also got another award from Nuria from "Spanish Recipes" (one of my favorite blogs) titles "I <3 style="font-weight: bold;">Chocoholic awards go to 4 blogs that I enjoy the most:
(1)Spanish Recipes by Nuria which is mostly Spanish cooking from Barcelona written in english to share with others.
(2)La Cocina de Lechuza by Pilar Lechuza, very simple tasty home style Galician cooking blogging all the way from Galicia, Spain. It's in Spanish though so good luck translating,
(3)Maangchi from maangchi.com because she puts so much heart into it, she takes time to record videos, answer comments, make sections for ingredients, etc. she even made a little book about her cooking. I love her Korean food, I am lucky to have a Korean store nearby and will be cooking more Korean food thanks to her :)
(4)Marlyn from "My Cuban Traumas" she is just so consistent with her posts lately and has some great desserts. Mostly Cuban cooking focused.
Posted by Nathan at 9:18 PM 6 comments: