Living in wonderful Southern California with plenty of Asian grocery stores and other ethnic food places, I once discovered "Bittermelon" my first encounter with it was at 99 Ranch Market at their deli, it was stirfried but I don't remember with what, I was appalled it was so BITTER, same thing happened again when I went to a Filipino fast food place called "Pinoy Pinay"
Surprisingly though over time, I grew fonder of many vegetables (and to this day I eat lots of vegetables daily , I always have to have a salad, stirfry, or a vegetable soup whatever but I need vegetables they're good for you and make me feel well and stay slim) anyways I eventually "acquired" a taste for bittermelon when I visited my Filipino friend Shantall and her mother had made a "Bittermelon Salad" I was surprised because I never though of bittermelon as "salad" material, but let me tell you it was delicious, even though it was bitter, the acidity of the vinegar, the spiciness of the ginger, and the saltiness of the salt and fish sauce really married well with the bitterness it was sort of addicting.

So last night I decided to make the bittermelon salad I had at Shantall's house, I gave a quick call to her mother to ask her how he she made it and wa-la I made it, I was surprised my family enjoyed it, it goes very well with fried fish and other oily foods like fried pork, and dishes in rich sauces, the acidity and veggies really compliment the rich meals.

Before I begin let me tell you more about bittermelon, in Tagalog (the official language of Philippines) it is called "Ampalaya" in english it goes by "bittermelon" or "bitter gourd", it is considered "medicinal" by many in asian medicine, and very nutritious, it is claimed to be good for many things particulary good at helping diabetics, and more.

This salad is very healthy, and contains a fair amount of ginger root which is anti- inflammatory, so this salad is something you can feel really good about eating if you like it.

Ingredients:
-2 bitter melons, cut in half, seeds and pith removed, cut as paper thin as possible
-1 large tomato or 2 small tomatoes cut in half then half again and into thin diagnol slices
-1/2 onion julienned and then julienned pieces cut in half
-3-4 inch piece of ginger, peeled and cut into thin little match sticks
-1/2 cup white vinegar (cane or coconut vinegar if available)
-1 tsp. fish sauce (also known as "Patis")
-1/2- 1 tsp. salt more or less to taste
-a pot of how boiling water 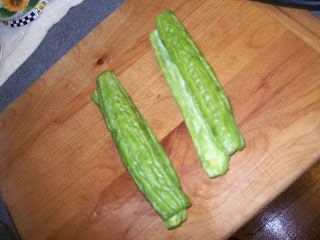 Directions:
(1)Place already prepared bittermelon in a strainer or colander, pour hot boiling water slowly over it, and drain well. 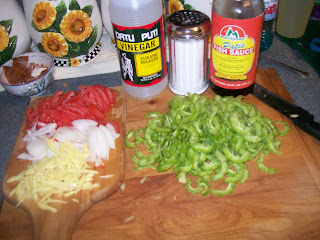 (2)Put in a large bowl and toss with all vegetables until well incorporated, add vinegar, fish sauce, and salt to taste, mix well. 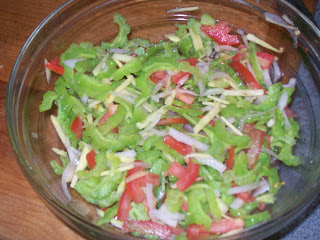 (3)Now it is ready, it taste best if it sits a while because the vinegar will pickle the vegetables a bit and it tastes better like that, so best to prepare ahead of time if you can.

PLEASE NOTE:
-I noticed this salad is used more as a relish, a little bit at a time while eating fried fish, etc.
Posted by Nathan at 11:34 AM 3 comments: