As I was flipping through one of my mother's "Foodnetwork" magazines (Vol. 3 number 10) I bumped into a recipe for "Eggnog Flan" on page 102. There was a whole section of cooking with eggnog (because people tend to have leftover eggnog from holidays or it sits in the fridge because "it's too fattening" for the weight conscience hehe... i'm one of them, will have a small glass then ignore it forever)

Anyways, the recipe called for only eggs, the eggnog, and caramelized mold. I started preping my flan, and then tasted the batter I was like "it's kinda bland" so I added 1 teaspoon vanilla extract, and then added some extra-sugar to taste it needed it, to mask the "egginess?". I made the caramel the way I always make it. And saw the instructions for the baking and was like "uummm I'll just do it my way 325 is too low I've made flan probably more times that the woman who wrote this has in her lifetime... n' I don't do it that way..." so pretty much I made the recipe my way and my own lolz.

The results... a rich, creamy, and dense eggnog custard, with hints of cinnamon, and exploding with that strong nutmeg fragrance and taste common in eggnog. Coated in the sinful caramel syrup that had adopted the taste of the eggnog. I will be making this again, not now, but next year ha ha. (I love flan, but my favorite is a version made with cream cheese which is what I almost always make, this adds a nice change or variety :)

Main Ingredients:
-5 large eggs
-3 heaping tablespoonfuls sugar
-4 cups eggnog (store bought, it can be spiked with rum, brandy, whiskey whatever you'd like that's optional, for my Mexican readers you can use "Rompope" and for my Cuban reader's you can use leftover "Creme de Vie" as an alternative)
-1 tsp. vanilla extract
-1/2 tsp. cinnamon powder (optional) 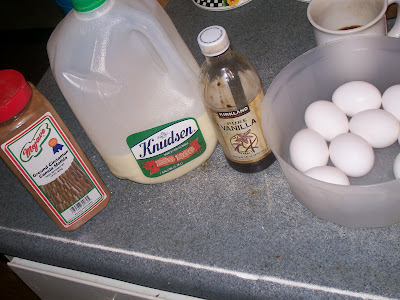 (1) Pre-heat oven to 350 degrees with a oven pan/ mold bigger than the mold/ pan your gonna use for your flan. Add water enough to fill 1/2 way. Forget about it while making your flan.
(2) First thing is first, in a sauce pan put 2 tablespoons water and 1/2 cup sugar. Bring to a boil on high heat, mixing well, stir constantly, keeping an eye on it so it doesn't burn completely. 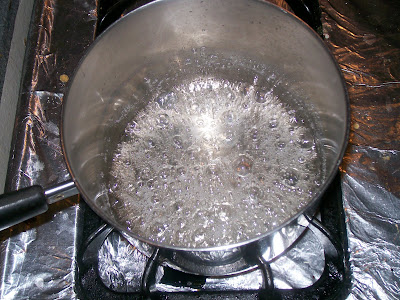 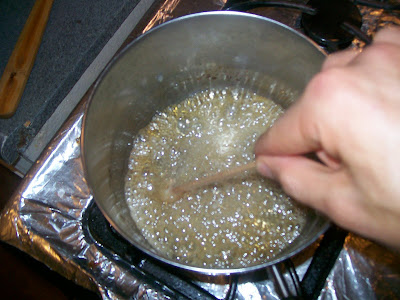 (3) When it turns into a golden color, pour into a mold, and move around in a motion that will make most of the bottom and surrounding area of the mold get covered with caramel. BE CAREFUL it is VERY HOT, and if you burn yourself with it... good luck... do not let your skin make contact with the caramel. Set aside. 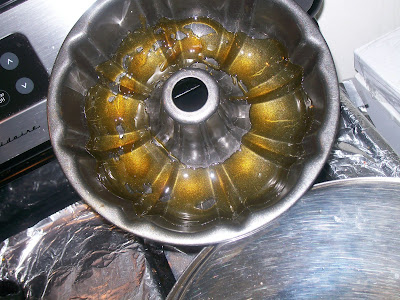 Directions for the rest:
(1) Beat eggs with sugar and vanilla using whisk, until well incorporated, slowly stream in eggnog until everything is very well mixed and incorporated or your second option throw everything in the blender and blend on low then high for about 30 seconds.

(2) Pour into a mold, passing through a strainer (if you have one, but if you have one use it, I believe it get's rid of air bubbles and makes it more smooth). Sprinkle all over with cinnamon powder. Cover the mold tightly with aluminum foil or some type of lid. This is your "flan mold" you can call it with the "flan" inside.

(3) Place the flan mold in a bigger pan that has been heating in the oven with hot water, in the center of the oven. Cook for about 1 1/2 hours covered. This procedure of cooking we call it "baño maria" (in which something is placed in a hot water bath to cook), 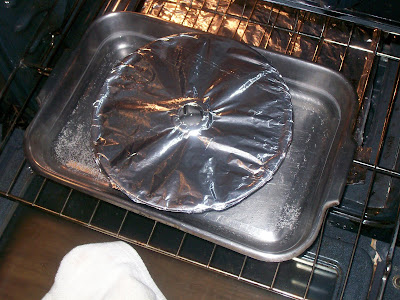 uncover after 1 1/2 hrs. and let cook uncovered an additional20- 30 minutes. It should be completely set by now (I cooked this longer than some flans because it just took longer to set since I didn't use real thick condensed milk)

(4) Take out flan, allow to cool down, then let cool in fridge, 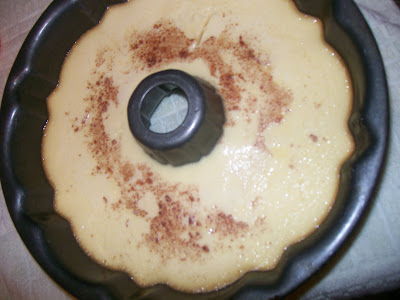 when ready to serve invert it onto a plate, and slice and serve, btw the brown specks aren't dirty stuff it's just specs from ground nutmeg that come already in the eggnog, I also cooked my syrup to a light brown as opposed to dark amber so that's why my flan came out real light. Just preference for this one time, I usually make it dark amber though, but I was craving a caramel sauce similar to my grand-aunts which is usually light :) 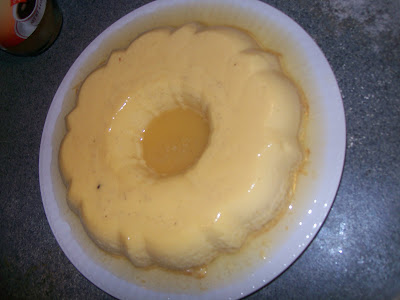 For some other flan recipes you might like check out the following:
(1) Chocoflan (Flan with a layer of Chocolate Cake)
(2) Flan de Queso (Cream Cheese Flan a mix of Cheese cake and Flan).... this one is my favorite flan...
(3) Flan de Coco (Coconut Flan)
Posted by Nathan at 4:41 PM

Hi! Just came across your blog and I am so happy I did. I also have a few flan recipes to share with you.

I am now followign your blog and I wish you the best of 2011.

Do you spray your pan with anything in the form of a non-stick? My caramel always tends to stick to the pan.

I don't spray it with anything and truth be told part of teh caramel sticks to my pan too somethings :-/ might be the type of pan, sometimes if i use a flat or perfectly round flat pan it tends to come out pretty well. But yes sorry can't help you much there. Maybe using cooking spray might help?