Almost all Spanish speaking countries and others in their cuisine have the dessert "Flan", Mexicans, Central Americans, South Americans, Cubans and other Carribean nations, Spain, France calls it "Creme Caramel", Filipinos call it "Leche Flan" etc. it is very popular.

The recipe I am making is from a Mexican woman who is very elderly that my mother takes care of, she was in the mood for some dessert one day and shared the recipe with my mother, and so my mother shared it with me, today was a scorching hot day here in Californias south so I actually went with my mother to work (again her work is taking care of this lady and since her oven is electric and doesn't heat the house I borrowed her kitchen to make the flan and then came back home that way my house wouldn't over heat.

This is my first attempt at making a type of flan on my own. "Flan" is a firm caramel custurd. Flan has many variations, but usually the basic one is condensed milk, evaporated milk, eggs, and vanilla extract with a light caramel syrup on it.

Other variations are fruit flavored, or there is a more elaborate one called "Choco Flan" which is deviles food cake with a layer of flan on top. (My aunt taught me the "Choco Flan" she calls it "Pan Impossible" but that will be reserved for a later blog post.)

Again the flan I am posting today is my mother's friend recipe. It has cream cheese incorporated into it, the cream cheese makes it more dense and heavy flan, which feels like a cross between a traditional flan and cream cheese. I suggest you try it out. She simply calls it "Flan" but I call it "Flan de Queso" because well regular flan has no cream cheese.

Unfortunately I really don't have my own family recipe for many Cuban desserts since my grandmother never made the elaborate desserts (well my Dad say's she used to when he was young but she lost practice with age) but what she did teach me was stuff like "Majarete" (sweet type of corn pudding), "Natilla" (cuban rich vanilla pudding infused with cinnamon and lime peel), "Pudin de Pan"(bread pudding), "Frituritas de Malanga Dulces En Almibar" (Malanga Fritters in Cane Sugar Syrup and just about any fruit and certain things in heavy cane syrup), "Arroz Con Leche" (rice pudding), Frituritas de Guayba Con Queso (deep-fried wontons stuffed with cream cheese and guava paste) those will all have their own posts later on, can't make them all to often or at once or I'd gain a bunch of weight.

Directions:
(1)Blend all main ingredients in a blender in 2 seperate batches or 1 each batch blend just until incorporated 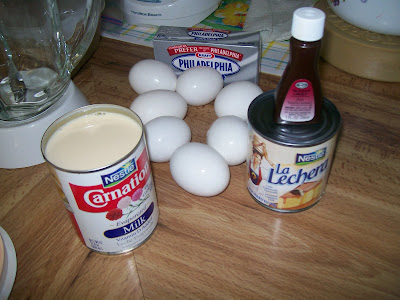 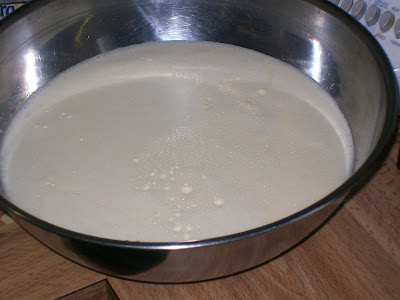 (2)Put sugar in a metal pan on medium heat stirring occasionally until it darkens and reaches it's caramel point. 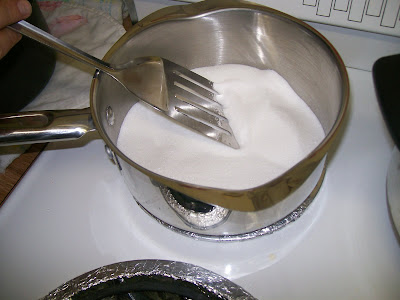 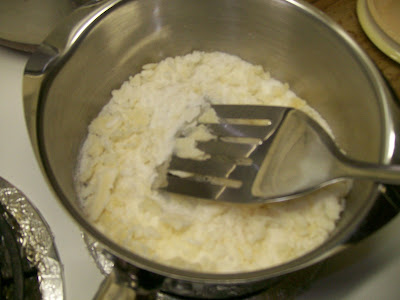 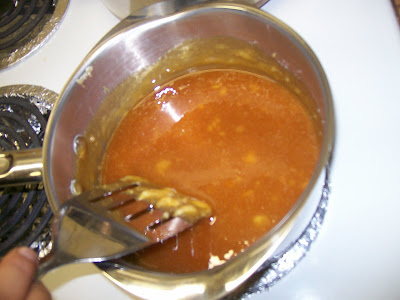 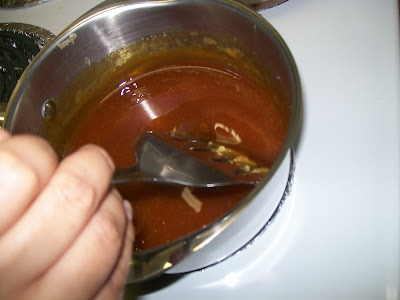 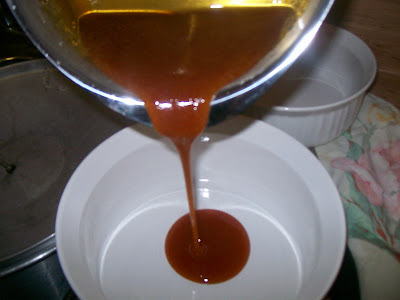 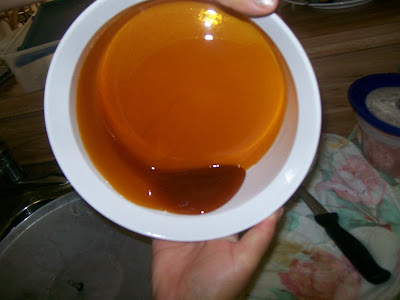 (4)Now when it hardens add main ingredient mixture, but pass it through a strainer 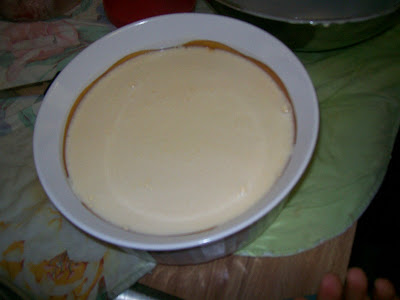 (5)Cover tightly with foil and put a top if your mold has it.
(6)You need a deep large pot filled with hot water that you boiled in it, add the flan mold that is well sealed, put in a oven that is heated to 350 degrees fahrenheit. Or just a cake pan that your flan mold can fit in. 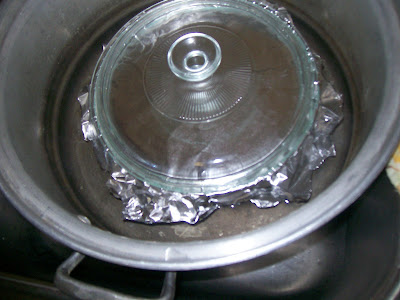 (7)Leave in oven about 45-60 minutes, check it occasionally and poke with a knife to check if it is done, if it comes out clean it is ready to remove.
(8)Now cool it completely (this may take a while) when refridgerate when it's cool, when ready to present, put a plate on top and invert it, it will fall flat upside down and now the caramel coating will be exposed. 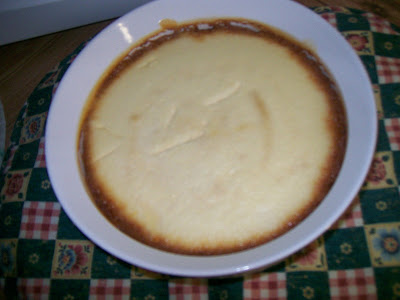 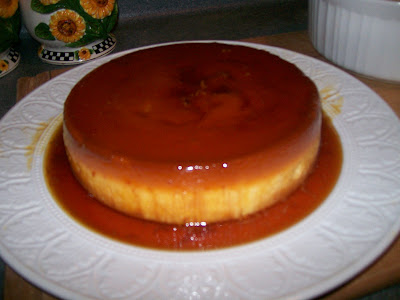 P.S. You can add sugar to the batter if you want but we don't like it overly sweet in my house it's already sweet enough from the caramel and the sweetened condensed milk but feel free to add more sugar to the blended ingredients if it suits your taste more.

Nathan:
This recipe looks so good! I will try it for the holidays.........
Thanks
PS it looks just like my cousin's recipe for flan de queso, but she uses 2 cans of evaporated milk, and less eggs. Hers is a Puerto Rican recipe.
Just like anything else I guess there are many variations!
Bev

Bev,
Hello thank you for visiting my blog :)

I am sure your cousins is delicious to.

The recipe I show here has more of a "cheesecake" texture, it's heavier because it has more eggs so it's more dense.

Your cousins probably makes a more "flan" textured one, because less eggs will make it less dense probably.

Well tell me what you think :)

I followed the recipe exactly and when I poked the flan it came out clean. After I refrigerated it, I cut into it and it was hard. It didn't have the flan consistency I was looking for. Do you think I did something wrong? Did I leave it in the oven for too long? Is it because I did it all by hand and maybe the cream cheese didn't break up the way I wanted it? I'm sorry for all the questions. Thank you in advance.

Madeleine,
A scratch flan is usually more dense than one from a mix (which has a jello like consistency) like the cream cheese flan is more like a well cheesecake meets flan so it's dense. The cream cheese makes it dense, rich, creamy. Jus the nature of the recipe. However if you want more of a light flan that's more of the well like custardy jello consistency or like regular flan just omit the cream cheese, and use 4 eggs. Less eggs, less dense, no cream cheese makes it less dense too. When I make regular flan that's how I make it (though I tend to use 5 eggs but 4 will make it lighter) Hope that helps :/

Hi Nathan-
Love your enthusiasm for food. Thought I'd let you know that the cheese flan was born in the Cuban community somewhere in Hudson County, New Jersey. My mom first made it in the mid-seventies. I was the one who poured the condensed milk, then the evaporated milk and scraped the Philly cheese into the blender along with the other classis flan ingredients. Lots of people are taking credit for its creation today. The Spanish in Spain are celebrating it as their own today. Galicia is marketing in a prepackaged form for supermarket vending. Etc., Etc., Etc. However let it be know that Cubans in N.J. have been preparing it since 1970s.

Hi Anonymous,
Thanks for the comment :) and yes it probably is more of a CUban thing, seriously what can't Cuban's do with cream cheese right? We've embraced it soo much. Use it with preserves, guayaba paste, any fruit in syrup, in pastries, in doughs, and for us in the states cheesecake YUM! THanks for that tid bit :)

Great recipe!! I've made this several times and it's always received great compliments. I really like the more dense texture this recipe offers. Great blog and recipes!! Keep on cookin!

This is the first time I'm making this....it was amazing. Love your blog keep up the great work :)

Anonymous,
Yes I believe it would work :) my mother has done it on stove top and some people use pressure cookers, just be sure to google a stove top method and adapt it to this recipe just to be safe :)

How much water should I use for the caramel?

I didn't use water for the caramel on this recipe, just heated the sugar over medium heat until it melted into caramel stirring occasionally.