These fritters are made from dry salted cod that has been de-salted and rehydrated. Dry salted cod is called "Bacalao" by Cubans, Spaniards, and I assume Portuguese to. Bacalao has been around for probably ages and was popular because it can last a very long time and didn't need refridgeration or anything in the old days. It is still popular in Spain and Cubans also enjoy Bacalao.
Salted cod fritters are more of a Spaniard thing but also enjoyed by Cubans (many of whom are of Spaniard parentage, etc. so much of it's cooking is heavely influenced and we share some dishes of course I am talking about pre-Castro Cuba the Cuba of today is different as well as the Cuban population there migration by Spaniards came to a halt after the Communist revolution, and most of Spanish parentage fled to USA or many left to Franco's Spain at the time.)

I have seen several recipes for salted-cod fritters and the recipe I am showing you today is from my great grandfather Raymundo Gutierrez, who was born in Spain and settled in Cuba. He is my grandmother's (my Tata's) father in law. He use to have a "Bodeguita" (like a type of food store) in Habana, Cuba around the streets "Bella's Quaine" (I hope I spelled it right) and "Louie" from (or maybe "Compastela"?) 1940- 50's not sure exactly where but my grandma said it wasn't to far from "Hobras Publicas" she said it was a large business district. The name of the store my Tata tell's me was "La Bodega de Clemente" (named after my Cuban born grandfather Clemente Gutierrez)

He use to be known for his salted cod fritters, and sold them in his "Bodega" (small food grocery place), my Tata tells me he use to make big batches and keep them warm in some container and start selling them at around 8 AM and everyone loved them at the time they sold for 10 cents each fritter.

So yeah this recipe is fairly old, the last time everyone heard from Raymundo Gutierrez was in 1963, he had citizen ship in the US and as well and fought in world war 1, he left Cuba during the revolution, but he was hearing rumours of how Fidel Castro was gonna "make Cuba better" and all his false promises, he was decieved and decided to go back to Cuba, he was told he could keep his business and what not, when he left my Tata and grandfather would send him his retirement checks from here but they would get cashed and they never would hear from him, after investigating someone was cashing them but it wasn't his signature, and he never responded to letters, time passed and they didn't here from him or anything.

They passed him for dead no one knows what really happened, my Tata thinks maybe he was killed like so many where during the first 5 years of the dictatorship for having a big mouth, or he realized what he got himself into and tried to escape and probably died at sea trying to get back to US. Not sure.

So there's a little backround story for those interested :)

Ingredients:
-1 lbs. Bacalao (dry salted cod preferebly the fillets)
-2 teaspoons baking soda
-2 cups all-purpose flour
-1 handful about 1 bunch finely minced fresh parsley leaves
-6 cloves garlic peeled mashed to a paste
-2 large eggs, beaten
-1 1/2 cups water (or more as needed)
Directions:
(1)Get the salted cod, rinse, and put in a large pot of water and bring to a boil, then when it comes to a boil drain, and put back in a pot with more water and bring to a boil again let it boil until salted cod can be flaked with a fork a bit, taste if it's salty if so, you need to drain it and bring to a boil again with more water (yeah I know time consuming but it's my grandmothers method she doesn't like to prepare in advance and soak the salted cod for several days or a day so yeah) 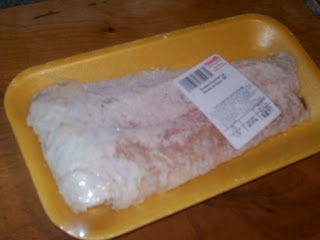 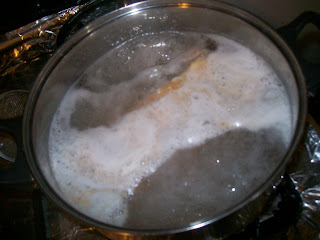 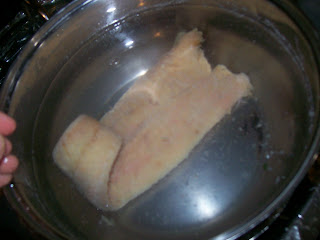 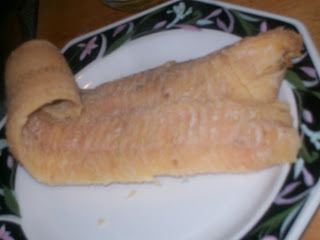 (2)Now get the de-salted bacalao and remove any spines or skins and flake into small bite size pieces, set aside. 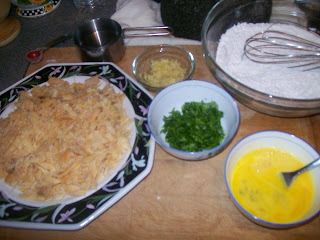 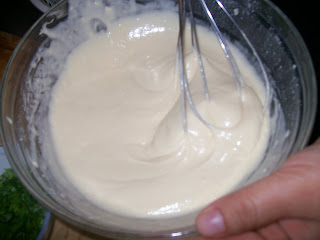 (4)You now have your batter, cover it all let it rest atleast 2-3 hours in the refridgerator preferably let it rest over night. 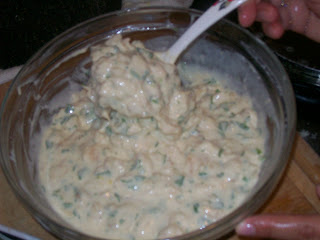 (5)When ready heat enough oil to deep or pan-fry at medium high heat for about 4-5 minutes (to test it I dip a wooden spoon and if it sizzles and or bubbles around it's ready) now get the batter and drop it by the tablespoonfuls and fry until golden on both sides you can move it around with a fork and a spoon. 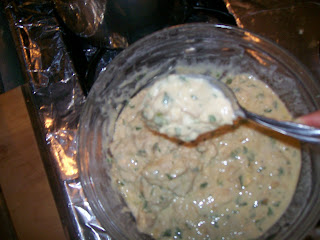 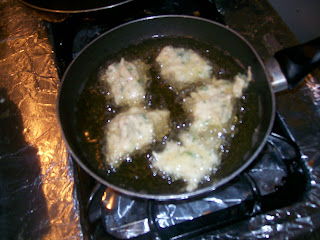 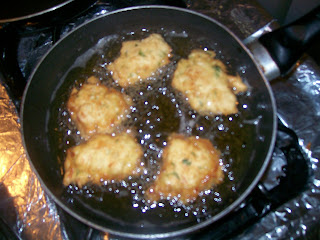 (6)Do not over crowd pan, and have a large plate or whatever with papertowels or paper bags to drain them on. 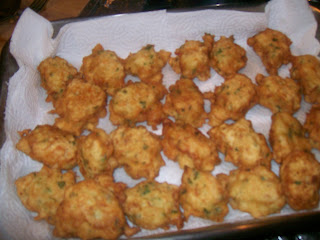 (7) Enjoy while hot the batter can last a while so you can fry only what your gonna eat.

You can serve it as a appetizer, snack, or to replace the meat dish in a meal.As you can see in the picture below I was a gluttonous pig (yes I'm a sinner to I had Avocado salted, Platano Frito, Arroz Blanco, and Frijoles Negros topped with minced onion and very generous drizzles of olive oil with a sprinkle of salt yes we love olive oil) 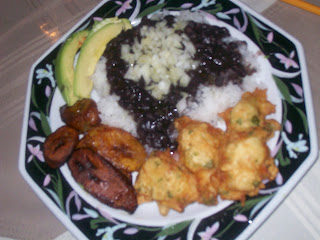 In Philippines, it is not recommended for a male to like cooking. Yes if the male love to cook for sure the taste in super.

Would you care for exchange link

Sad story about Raimundo. On a lighter note, I love eating bacalaitos on the beach in Puerto Rico with an iced cold beer!

Nathan...the street where the 'bodega' was located must have been Belascoain. I've had cod fritters in Cuba, Spain, Portugal, and Italy. All delicious and very similar. Frituritas and cold beer...yum!

Poor Raymundo...he was fooled by the Castros like so many other Cubans who had high hopes in 1959.

Cebu Pictures,
Sorry not interested but wonderful blog, my closest Filipino friend Shantall and her mother are Cebuano and have taught me how to cook some delicious meals. I'll check your blog more thoroughly when I have time I love to learn new things and see the beauty in other cultures.

Mamey,
Thanks for heads up Mamey, I'll edit and fix all the spelling and grammar stuff later I was typing pretty fast and being careless, but I'll revise soon :) and yes poor Raymundo :( Castro destroyed the lives of so many and his regime continues to deteriorate Cuba. Castro is a monster even his own mother ended up fleeing Cuba and some of his children for fear of being killed by him.

Hi, Nathan! I really enjoyed seeing how to make the salt cod fritters. There was some lying loose in a box at WF and I picked up a piece and thought how fun it would be to chase DS around the house with it (I am such a bad mom). I'm glad to know how to transform it into something edible, LOL!

Gosh, what a sad story about your grandfather. Not knowing what happened to him must be hard.