"Pollo al Vino" translates to "Chicken in Wine" I learned this recipe through my blog buddy/ friend Ivonne from her blog Cuban in the Midwest (which is one of the must check blogs along with mine if you like Cuban Cuisine, besides my blog her's is the most complete I've seen dedicated to the Cuisine of Cuba, so like I said a must check if your trying to explore Cuban culture through a culinary perspective)

Anyways back to the recipe, this stew is a nice change from the other typical Cuban stews in that it contains NO TOMATO products in any form (no tomato sauce, or paste, ketchup or fresh tomatoes) most Cuban meat stews are stewed in a red tomato based sauce with wine, and this one offer's a nice change. It does have a reddish color, but that color is achieved from using paprika in the dish, the sauce is simply formed by stewing meat in very low heat with simply wine, and the Cuban holy trinity (onion, garlic, bell pepper) with spices, the meat will release it's own juices when simmered for awhile and the steam and stuff will cook everything perfectly and all everything just marry's well. It was a hit in my house :)

Growing up my grandmother always talked about Cuban meat stews that her father used that were made without tomato, they were used to stew meats like goat, lamb, duck, rabbit, and chicken, however my grandma never really made them so I never had the opportunity to try it, so when I saw a recipe that resembled what my grandma had spoken about I was like "I need to try it!" my grandma has shared a recipe with me from what she remembers, but I was doubtful of them because I was like "well if it has no water just wine and stuff won't it evaporate and the meat kinda burns idk) but it turns out it didn't lol. from trying Ivonne's recipe that technique works, but yeah i have never gotten to making it. (it's similar to Ivonne's but spiced different and the result seems to give you a dark brown sauce I will share it someday)

I did modify the recipe a bit but overall it's the same way she made it, only difference, I stewed the potatoes and carrots from the very beginning with the meat, and browned the meat prior to stewing it and sauteeing aromatics :) I recommend this dish to anyone ya'll need to try it! :)

Ingredients:
-1 whole chicken (cut into segments, remove skin, wash, drain and rinse several times, I have hte habit of cleaning it like 2 times, then giving it a last wash with vinegar, salt, nad water then drain and pat-dry. I do this because I like getting rid of the little taste some meats may have...)
-ground black pepper to taste (I used about 1 tsp.)
-sweet smoked Spanish paprika (1 1/2 teaspoons)
-salt to taste (I used 2 teaspoons to rub all over the chicken)
-1 green bell pepper chopped
-1 onion chopped
-6-8 cloves garlic minced
-1 cup dry white wine or dry sherry
-2 bay leaves
-3 large potatoes, peeled cut into 3 sections or cut in two
-3 carrots, peeled and cut horizontally, or in rounds your choice
-6 large Pimiento stuffed green olives cut into 3 sections, or 12 small one (I think canned black one's seedless would work too)

Directions:
(1) Place cleaned chicken in a bowl and run in/ toss well and coat well with salt, pepper, and paprika. 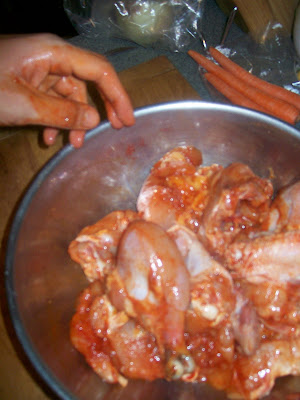 (2) Brown it in batches in olive oil, over high or medium high heat. Afterwards i set it aside in a deep pot 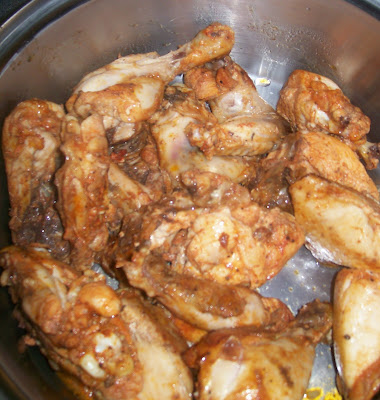 (3) In the same pan you browned the chicken sautee onions, garlic, bell pepper over medium high stirring occasionally making sure to scrape any browned bits, de-glaze with 1 cup of wine, and bring to a rolling boil 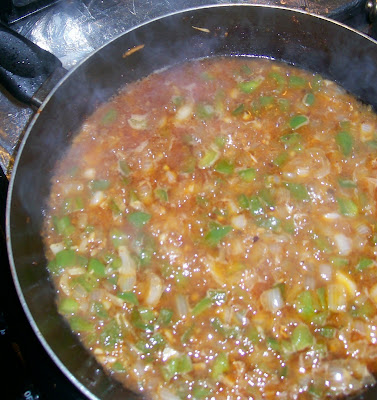 (4) Toss the sauteed onion, garlic, bell pepper and wine mixture into the pot with the chicken, throw in potatoes, carrots and olives. I added 1/2 cup water to this just incase it needed more liquid to cook. Bring to a rolling boil covered, for about 1 minute or 2. Then lower heat to low and simmer covered for about 45 minutes. And ta-daaa you should end up with this 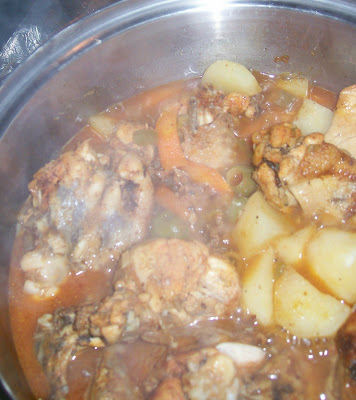 Thank you for mentioning me Nathan. I'm very happy that you liked the recipe. Yours turned out great!

Another chicken stew without tomatoes popular in Cuba was 'pollo al jerez,' with onions, garlic, olives, and, of course, dry sherry from Jerez, Spain. Thanks to Ivonne and you for this one...sounds great.

I have a good recipe for "Pollo al Jerez" but don't have the Jerez wine LMAO.

They have a passable 'jerez fino' at Trader Joe's.