In Spanish "Arroz" means rice, and "Caldoso" means soupy, so direct translation would be "Soupy Rice" "con" means with and "pollo" well everyone knows this it's chicken :D

In Spanish cuisine as in Spain soupy rice dishes like this can be cooked with almost anything pork ribs, chicken, seafood, etc. it's essentially in it's most basic form rice with a sofrito (sautee of onion, garlic, bell pepper sometime tomato) with a lot of liquid and some spices married with your choice of protien.

Cuban Cuisine shares the same type of dish except it's called "a la Chorrera" (see my post for "Arroz Amarillo Con Camarones a la Chorrera" for explanation ha ha) and can be thicker reason it's shared is because back before the communist pigs took over Cuba in 1959 a large proportion of Cuba's population were "Criollos" and Spaniards (meaning Cubans born of almost pure Spanish ancestry, example my grandmother is from Spain and my grandpa is Cuban born of Spaniard parents)

So here's my recipe similar to my Tata's (see note below) 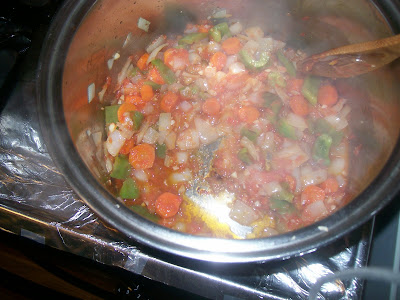 (2) Throw water, bay leaves, cumin, salt, the saffron or bijol, and the optional chicken bouillon powder. Bring to a boil, throw your chicken cut in segments and cleaned in and let boil on medium low for 20 minutes covered. 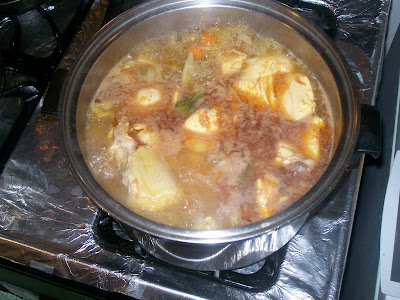 (3) After 20 minutes, add your short- grain rice, bring to a rolling boil, give a good stir, and simmer on medium low for 30 minutes, giving a good stir and scraping the bottom so it doesn't stick every 10 minutes. 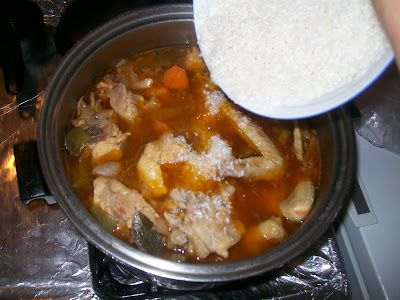 (4) It's done as it cools it thickens, don't expect it to be real real soupy it's more like a thick porridge, 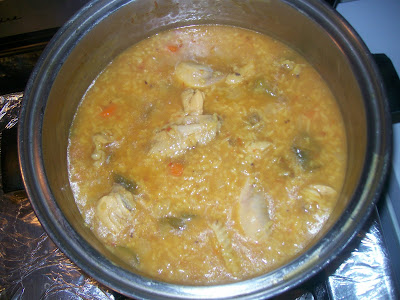 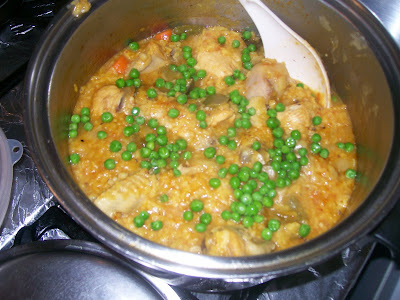 Remove from heat, serve with a salad and if your not watching your carbs or weight some good crusty bread, this picture was me and my Tata enjoying lunch :) 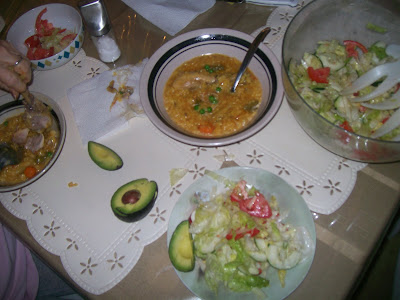 PLEASE NOTE:
-Using skin-on bone in chicken makes a world of a difference for these types of dishes.

Grandmother's Variation:
-My Tata does this slightly different, she simply throws everything in the pot minus the olive and rice, boils everything together 20 then she adds the rice gives it a good stir and let's it cook an additional 30 minutes turns off another good stir and it's ready. Most people however I've seen sautee the aromatics I do too. My grandma's logic "Asi lo hacia mi papa a lo gallego, y tambien el pollo con piel y todo ya tiene bastante grasa igual si lo aces con costilla no tienes que acer sofrito asi queda bien y igual de rico" translates to "That's how my dad did it the care free simple way, the chicken already has plenty of fat and same thing if you make it with pork ribs, you don't have to sautee in aromatics it comes out just fine"

P.S.
From now on every time I want thick porridge like rice and chicken I will make it this same exact way because it was the best "a la Chorrera" type of rice and chicken dish I've had! Trust me it's simple but something about boiling the chicken for a while in the water forming a stock, and everything just simmering together for an appropriate amount of time gave a WOW flavor.

Looks very good to me...sounds great and I bet taste even better Nathan!!!

Abby you should try it, it's real good and simple :D

Nathan I like the way you explain everything and go step by step. The caldo looks delicious. Thanks for sharing.

I remember my mom used to make this for us whenever we have the flu.

OMG thanks Nathan for this recipes so yum and simple enough.