This weekend I went to go visit my good friend Shantall and helped her with her yard. It was fun (because I'm a dork like that) we went to the out skirts of the San Fernando Valley to get "horse manuer" to fertilize the soil. It was hilarious the truck used to drive us up there was literally over a huge mountain of horse doo-doo ha ha. (Yes yes not what a typical teenager would do on his weekends for fun.)

Anyways, towards the end of the day after some yard work, talking, biking and lots of wonderful food and fun I she gave me a small bag with Habanero peppers from her yard.

I was wondering, "What should I do with them?" I was even thinking of adding 1 habanero pepper to a Cuban dish and see what happens since it tastes like a very spicy green bell pepper. (No kidding I've had them raw with food, I take little nibbles and eat along with my food) Well after some thinking and reading other's opinions on a forum I decided to make a spicy Mexican hot sauce.

For those that haven't heard of these peppers they are claimed to be the most "spiciest" pepper in the world. Along with a Scotch Bonnet (both from the same species)

I highly recommend this sauce, it has the flavor of a crisp, sweet bell pepper with strong heat, although for me the sauce isn't so hot it's hot but can be consumed fine. (My mother actually makes hotter sauces combining lot's of dry "Chile de Arbol" peppers and "Chipotles in Adobo" those will burn stronger) 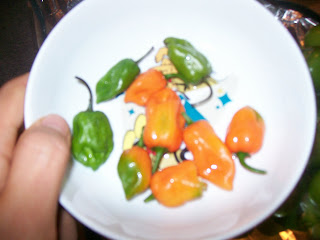 Directions:
(1)In a large griddle covered with aluminum foil grill the tomatillos, habaneros, and garlic until blackened on both sides and they release some liquid and it evaporates. Now set aside and let it cool so you can handle with your hands. 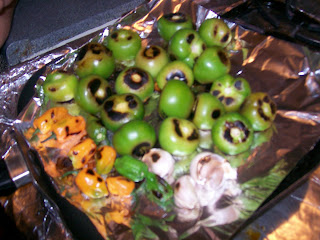 (2)Once cooled remove as much of the black charred parts as you can, add to a blender or food processor. Now add salt, and a little water (only enough to blend not to water down a bunch JUST TO BLEND) 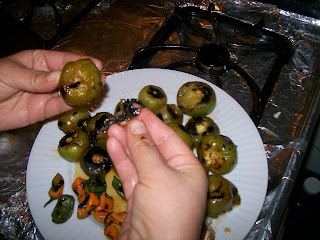 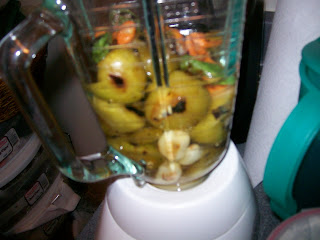 (3)Now set in a bowl and stir in minced cilantro and onion, taste for salt and more if needed and if desired stir in vinegar (typically vinegar is only added to red sauces not green we didn't add it but it's your choice) 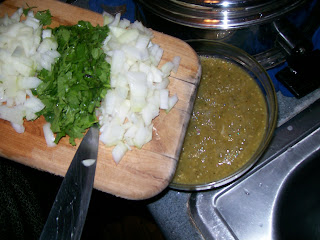 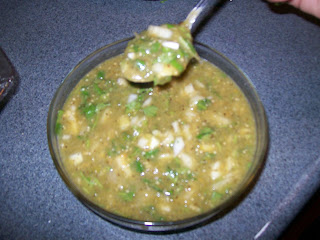 NOTE:
-If you cannot find "tomatillos" in your area you may substitute them for regular fresh tomatoes (preferably roma).
-This is to be used as a condiment, you add a little bit to your food when eating to make it more spicy/ give it a kick.
-I had some unripe one's in my fridge from the last time I recieved some Okra, there was unripe Habaneros which are still pretty damn good :)
Posted by Nathan at 8:33 PM