This is a very simple simple Mexican dish. It is not refried despite the name, I don't know why in English they call it "refried beans" but whatever it's only fried once and it's not even fried it's just boiled beans that have been mashed to a paste with not a lot of oil.

The recipe I am showing to you is the most BASIC, AUTHENTIC, MEXICAN way of preparing them, there is more elaborated delicious way's to make it but this is the typical way it is seasoned for accompanying almost any Mexican dish in place of "Frijoles de la Olla" (lightly seasoned boiled pintos)

Ingredients:
-1 basic "Frijoles de la Olla Recipe" (leftover or cooked the same day don't do anything fancy to it don't need to click on recipe I'm a show it here again along with the rest)
-1/2 onion minced
-4 tablespoons lard or bacon grease or "brown lard" (the leftover lard from frying meats and pork rinds)
-salt to taste

Directions:
(1)After making "Frijoles de la Olla" (honestly it is so simple I thought twice about posting it, just put like 3 - 3 1/2 cups pinto beans rinsed in a pot, plenty of water, 1/2 onion, 2-3 cloves garlic and bring to boil and cover on medium low when cooked salt it) cook til tender. 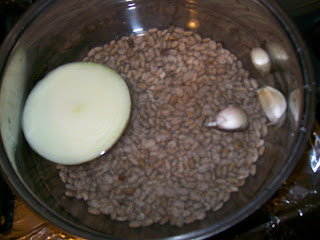 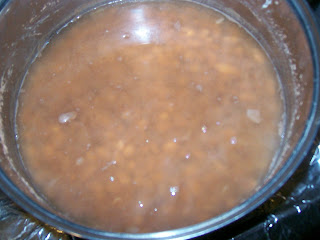 (2)Heat lard in frying pan, add minced onion and fry until well browned (about 10 minutes more or less) I left for awhile so they burned a little but not really still good. 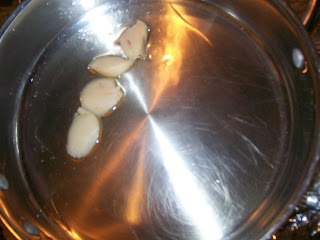 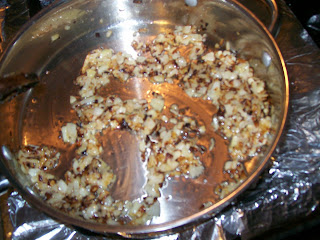 (3)Scoop out beans with a spoon that drains them and add to the pan let stir a bit and start mashing with a potato masher carefully, it may seem to dry so add a little bit of the bean broth to make into desired constistency, keep mashing and bring to boil until it get's a thick but not to thick consistency. 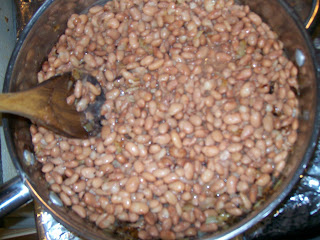 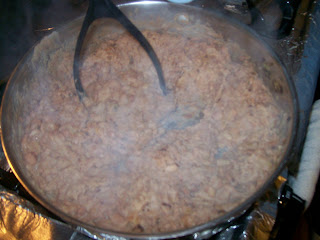 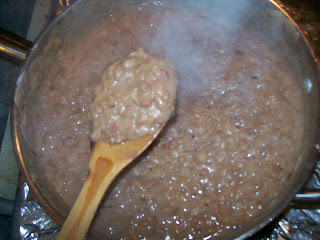 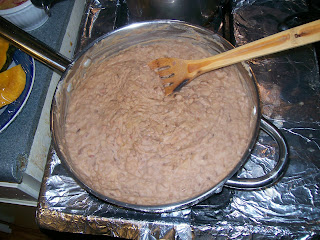 PLEASE NOTE:
(1)This dish is eaten in 3 different consistencies usually, like firstly we will fry them until really smooth and super thick calling them "Frijoles Chinitos" when it is this thick and cooked it is used to spread on bread along with other ingredients to make Tortas (type of sandwich made with Bolillos a type of french roll) the second way is like a loose gravy consistency this is used to lightly spread and moisten a tostada topped with other stuff like in my recipe for "Tostadas de Pollo". The third way is the way I prepared it which is for eating with anything as a side.

(2)Again this recipe is very basic you can make more elaborate versions for example fry it with bacon grease from rendered bacon along with with the bacon crumbled, you can fry it with Mexican chorizo and make "Frijoles Con Chorizo o Longaniza", you can scramble eggs fry in the pan and add the beans to mash in for "Frijoles Revueltos Con Huevo" (very popular to give to baby's), you can sautee the onions and add a dried "Chile Negro" or "Guajillo" add beans and reconstitute and infuse the chili flavor by adding some of the broth letting it boil and mashing beans in. There is a lot of way's but again the one I showed is very basic and true. I almost forgot but some also re-fry it then let cheese melt over the top to make a cheesy topping, or also when serving add a dallop of cream or crumbled fresh Mexican cheese over the top also using a dry stinky cheese that smells like feet is popular to called "Queso Cotija" a type of "Queso Añejo"

(3)WIth the leftover broth you can also make "Enfrijoladas" or drink it (I know sounds gross but it's tasty and high in iron might make you fart though haha)
Posted by Nathan at 10:07 PM 3 comments: