"Platano a Puñetazos" can also be called "Tostones" (I guess I'll just refer to them as Tostones because it's a short way of saying it) these are twice fried green plantains thick chips. First fry makes it firm yet soft inside enough to flatten to a semi-thick disk, then second fry crisps it nicely yet maintains great inside texture.

These are very popular in my household whenever we buy green plantains we make 3 things either "Platanos a Puñetazos", "Mariquitas" (thin plantain chips) or "Fufu de Platano Verde" (green plantain mashed with garlic and pork rind) yeah I know the first two sound kind of rude "Puñetazos" is like a punch in the face, "Mariquitas" means little gays or little gay people/ little homosexuals but it's what we call the plantain chips, and "Fufu" well it sounds like something stinky but it's not haha. I'll show everyone in my blog later on eventually all the green plantain dishes I mentioned.

Also LASTLY some cooks like to use a "Tostonera" which is what presses them for the second fry, a "Tostonera" is not necessary to make good "Tostones" I'll show you how to make really good one's without using, the old fashioned way, the way my grandmother taught me, my grandma say's "Que tostonera ni que nada chico yo ago todo a lo gallego" which in english would be "What!? "Tostenera" who needs that boy, I do everything the old fashioned in your face way"... I saw some lady on TV use a hammer I was like, "Que coño eso boba, eres una cocinera de la tele y no sabes acerlo mas facil?"

Also for those who can understand Spanish when she say's "a lo Gallego" it doesn't mean "like a Galician" you see here is a piece of history there was a time in Cuba when so many Galicians immigrated to Cuba that everyone was labeled as "Galician" it was used to refer to ANY Spaniard immigrant to Cuba or even Cubans born of Spaniard parents or from Spaniard families, and even though this may not sound nice the expression "a lo gallego" means "a lo bruto" which means "like a brute" it may not be nice but it's the way the term got used. It's not a bad thing though don't take it to heart Im just explaining some cultural history stuff from a primary source "my grandmother" haha, you'll also hear some say "Cuando se me suba lo gallego" which means "When the Galician in me rises" which is used to express something like "When my blood boils over" like getting really angry and furious. Woooo enough of that I went way off subject here is the recipe.

Directions:
(1)Peel Green Plantains, carefully, you can break it since it's so stuck to the peel, simply cut off edges with a knife, then make a straight cut not deep just enough to cut the peel downward, gently pull the peel off, you want it to stay almost in tact both the peel and the plantain (you'll see why you'll need the peel later to use as your own "Tostonera") 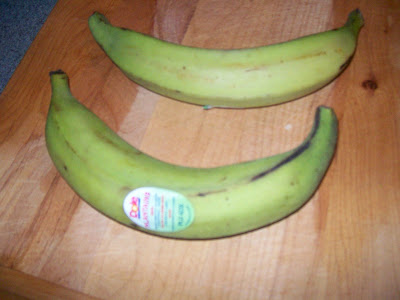 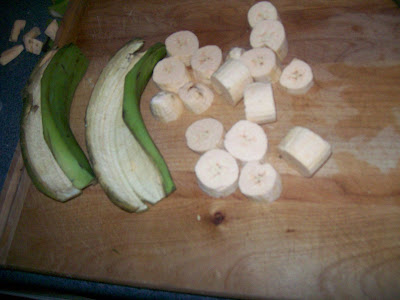 (3)Heat oil on medium high heat, to check if it's hot dip a wooden spoon and if it bubbles around it's ready, now add the plantain slices one by one in one layer, and fry on both sides until they turn yellow and some lightly brown, use your judgement I didn't use a timer or looked at the minutes 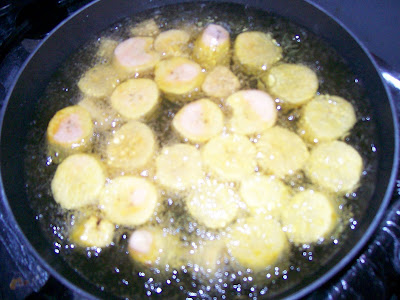 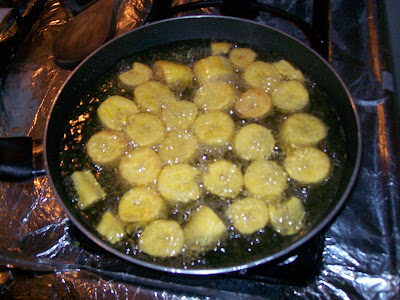 (4)Quickly take out of oil, drain them well, WORK QUICK OR THEY WILL HARDEN, put your piece of plantain flat on the peel, then cover with another peel and press down to flatten down. 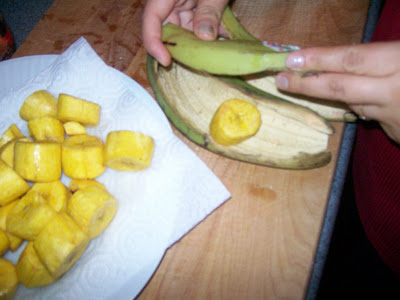 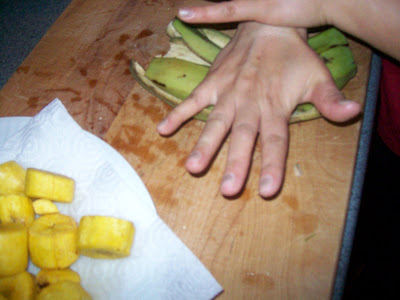 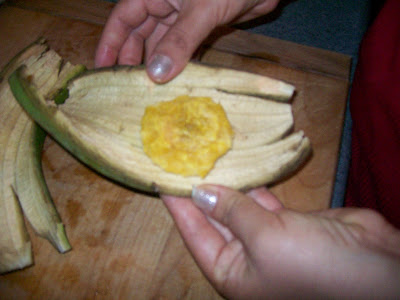 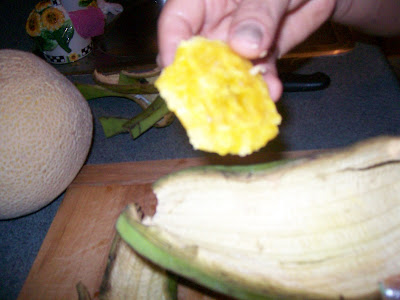 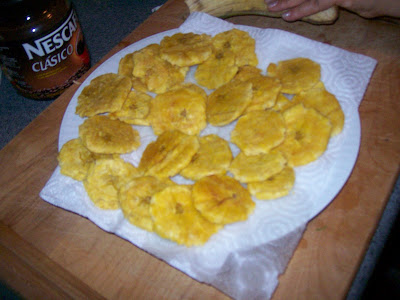 (5)Now heat oil back to medium high, quickly in a bowl, add some water to the tostones flattened and swish, now drain well, pat dry a bit THIS WILL MAKE THEM REALLY CRISP IT MAKE A DIFFERENCE BETWEEN AN "okay" Tostone and a "great" Tostone. Be careful though do remember to drain the water well and pat a pit you don't want the oil to jump and burn your pretty face or set your house on fire. Do that for every small batch you make right before frying. 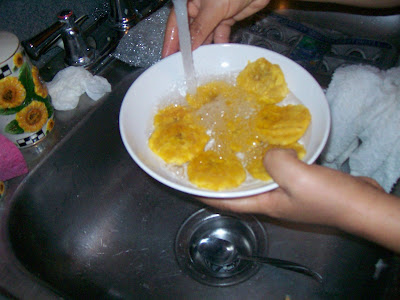 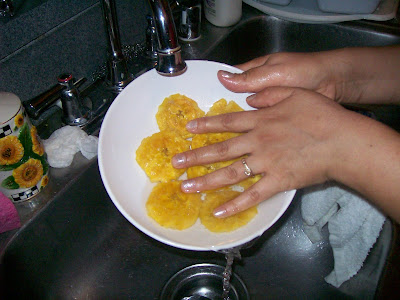 (6)Now add the Tostones back in the hot oil and fry on each side until golden brown, quickly take out put on paper towels to drain and salt them while they are HOT. 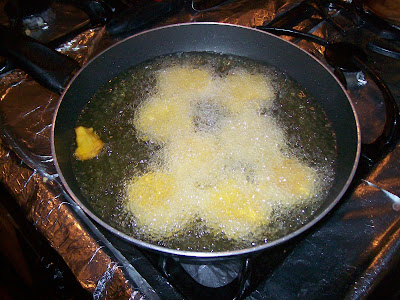 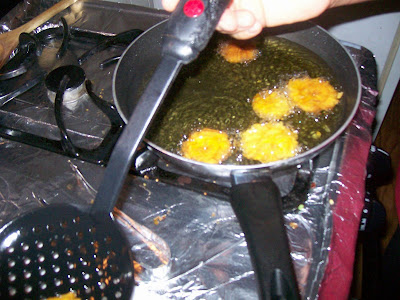 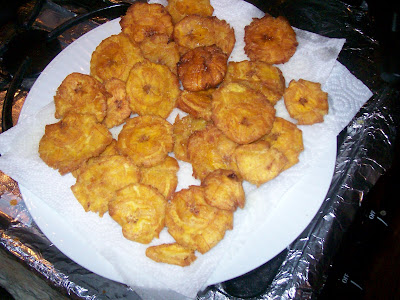 "Tostones" are also made by other cultures, Puerto Ricans, Haitians, West Africans, Dominicans and maybe other Carribean cuisines make them.

SUPER DUPER IMPORTANT DO NOT TRY TO MAKE THESE IN ADVANCE YOU HAVE TO EAT THEM JUST MADE HOT OR UNTIL SLIGHTLY COOLED, BEFORE THEY COOL COMPLETELY BECAUSE THEY TURN HARD LIKE A ROCK LATER AND LOSE THEIR GOODNESS.

Also this seems like a big dietary evil sin but if you do happen to have leftover "Tostones" the way to reheat them like new... is... are you ready... to deep fry them again to re-heat so they taste good and fresh. So I guess those leftovers would be 3 times fried heck I've had "Tostones" that where fried 4 times each time to be re-heated because we had so many in the house.