Marinading meats in "mojo" (pronounced mo-ho... yes I know it sounds funny... hehe) is a very common thing to do in cuban cooking which is simply in it's purist form lime or bitter orange, salt, and garlic this simple combination is the back bone of many Cuban meat dishes and roasts and formed into a sauce to be consumed with boiled yuca or other starchy tubers. Of course some add certain things too it depending on what they are cooking.
This week my Tata (grandmother) was craving some Cuban style pork ribs roasted in the oven in delicious mojo sauce, fall of the bone tender with lots of savory sauce to pour over the meat and rice :)

I know I know many might be wondering when the hell is Nathan gonna post a "lechon asado" (Cuban whole roast pork) or "Pierna de Puerco Asada" (pork leg roast) all of which are typical, but to be honest I still havent perfected it. I can never get the perfect crispy skin on the pork leg, but a fatty pork shoulder with no skin to crisp I can pull off very well. I'll post in the future when I can be proud of it ha ha. I basically marinade it the same way I do to pork ribs except I need to figure out the perfect cooking method, so til then hold on my fellow foodies :)

Directions:
(1) Clean the racks of pork spareribs by rinsing well with water. Pat dry and place them in a oven pan.

(2) Make garlic into a paste using garlic press, or mortar and pestle, mix it well with salt, and add sour orange or lime juice, mix well. If using oregano add it to the mixture. This is considered your "mojo"

(3) Pour and rub all over pork ribs, cover with plastic and refridgerate over night (up to 24 hours) 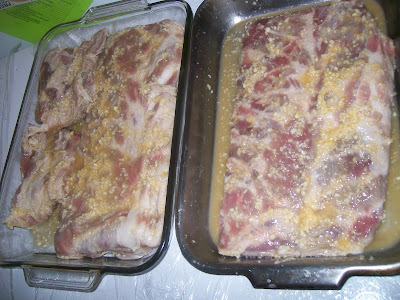 (4) Next day EARLY IN THE MORNING so they will be ready by dinner time (like I put them at 10 AM and finished them at 5 pm), unwrap and seal really well with aluminum foil. Pre-heat oven at 220 degrees Fahrenheit and put the pork ribs in. 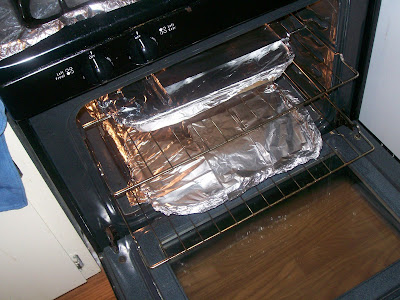 (5) Allow to cook at that temperature approximately 6 hours (yeah it's a long time but they will be really tender. and it's not hard at all just put them in the oven and forget about them and go on with your day), then uncover and raise heat to 425 degrees fahrenheit for 30- 60 minutes to allow to brown on top. I had to rotate the bottom ribs with the top one's because the one's at the bottom doesn't get to much heat. Remove and allow to rest 5-10 minutes. 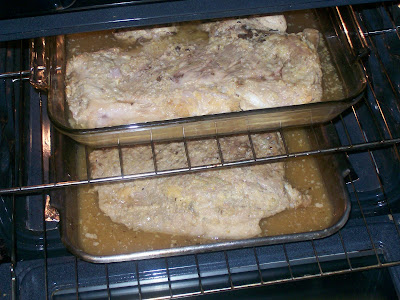 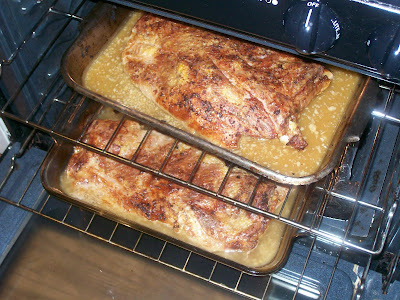 (6) They are ready to serve, You can cut in or rip'em out and eat with whatever you'd like :) Preferably some fluffy white rice and black beans with a nice simple salad or plantains or boiled yuca (you know the traditional side dishes) I didn't make a complete traditional meal, I just accompanied with some leftover white rice, my mom had cooked a white bean stew, I had tons of turnip greens in the fridge which I sauteed to serve in place of the salad and starchy tubers. But it was still delicious non the less. Mmmm.... and for a after dinner treat I made some "Churros"to satisfy the sweet tooth, I ended up eating them before dinner, while they were hot and just out of the frying pan (which if you don't know what they are you might live under a rock :) 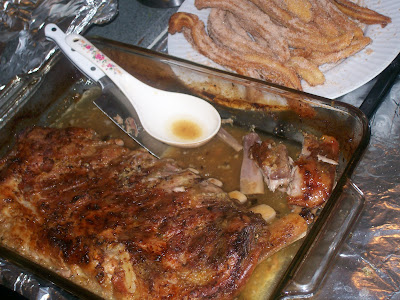 PLEASE NOTE:
*I know the mojo I made has no "spices", simply because we just like a very traditional simple mojo. But I know there's people that really like to use a lot of spices in their mojo, if your one of them you can add ground black pepper, ground cumin, and oregano to the pork marinade and throw a couple bay leaves if desired all proportions to taste. Hey this is probably not traditional or typical at all, but maybe some toasted ground coriander seeds would be delicious too, for those that like to be more adventuress.

LOONG STORY YOU CAN SKIP... if you want
*You can actually remove he meat and put it in the broiler to brown and serve seperate from the mojo sauce. My grandmother was stubborn that she wanted the bottom part browned, but I felt like it was redundant and to much of a pain in the @$ she got mad and told me she's not gonna eat them she was like, "Entonces no me las como chico, bruto que eres" (then I won't eat them boy, your dumb), and I told her, "Pues no te las comas chica me las como yo" (well girl don't eat I'll eat them), and she said, "Pues cometalas todas" (well eat them all), and I told her, "Pue' gracias caray punto se acabo" (well thanks dang, end of story), I've put up with bull sh@t all my life and quiet frankly didn't feel like putting up with it today, there's leftovers in the fridge I can heat up for her to eat :) ... "mal'criada" (poorly raised is direct translation means spoiled brat) and yeah sometimes we are kinda like a Cuban household so talking like that isn't rude... well turns out my grandmother LOVED them, she told me she hated them and didn't talk to me, but she ate them and later that night she told, "Estaban ricas, nunca me an salido tan tiernas a mi, y se doraron bastante bien, PERO mejor quedarian si estubieran doradas de abajo" (they were good I've never made them so tender, and they were nicely browned) and I said, "Ya ves, bueno otro tiempo que las prepare las voy a sacar del mojo, hervir el mojo aparte pa' matarle bacteria y dorarlas de todos lados en la parilla del horno" (translates to next time I'll take it out of the mojo sauce when it's real tender and ready to uncover then I'll brown it on all sides on high heat in the broiler, and boil the mojo sauce seperately to serve with the meat)

P.S.
I love my Tata (grandmother) we just have tough love I guess, in the end we love each other and there are no hard feelings :)
Posted by Nathan at 3:38 PM 11 comments: