Pollo in spanish is chicken (well most know this) and "Salsa Barbacoa" means "BBQ sauce". Literal translation for this dish is "Chicken in BBQ Sauce" This chicken is tangy, sweet, salty, and smokey. The chicken is marinaded in something called "mojo" pronounced "mo-ho" which is a mixture of lime or lemon or sour orange with garlic, and salt sometimes other spices are added, it is often used to marinade meats in Cuban Cuisine, then the chicken is floured, browned in butter and baked or stewed in a homemade BBQ sauce which has ingredients common in the cuban kitchen (wine, sugar, lime, ketchup, butter, onion, and soy sauce) yes soy sauce, stuff like fried rice and Chinese fast food was always popular in Cuba due to Chinese migration.

Anyways, this recipe I saw it in a Cuban group called "Comida Cubana" on facebook (it's a wonderful group dedicated to the Cuban kitchen, unfortunately it's all in Spanish for those who don't understand the language). I had never cooked this dish before but saw it posted on that group, and on a few Cuban sites, some say it's from Nitza Villapol's cookbook called "Cocina al Minuto " (for those that don't know Nitza Villapol is what many consider the Cuban Julia child and many Cuban woman who had never been in the kitchen learned from this book, however I will add I never learned Cuban food through her, nor prepare everything the same way she does or always agree with her way of doing things lol. but I do like her recipes for idea's or inspiration.)

According to some people who commented the recipe it's apparently a party food for some, made on special occasions, and is held in high esteem, the recipe is also an attempt to reproduce a delicious BBQ chicken popular in the 80's from a restaurant called "Polinesio Restaurant del Hotel Habana Libre" in well Havana, Cuba. Formally known from word of mouth as "Trader Vicks" in 1958 Cuba.

I do re-call my grandmother making a Cubanized BBQ chicken which was chicken marinaded in Mojo then deep-fried til cooked through then tossed it in BBQ sauce and served. Maybe this was her version of the dish? I've also seen in several Spanish blogs dedicated to well Spanish Cuisine dishes called "Pollo en Salsa Barbacoa" which braise/ stew chicken in other homemade variations of BBQ sauce. Anyways well here's the recipe I found and let me tell you it was delicious and a hit in my house, served with white rice, black beans, and a salad :) Give it a try you'll be pleasantly surprised, and it isn't overly sweet either. I'm glad I tried it :)

Ingredients to dust chicken:
-1/2 cup flour
-2 tsp. sweet smoked Spanish paprika (I used Pimenton Picante which is a hotter version but in my opinion it isn't spicy)
-1 tsp. salt

Directions:
(1) Marinade the chicken in a large bowl with salt, pepper, sour orange juice, and garlic for atleast 30 minutes, preferably 2 hrs or over night. Set aside in fridge.

(2) Mix all the sauce ingredients (ketchup, wine, soy sauce, sugar, lime, onion, water, butter), in a small pot, and bring to a boil, then remove from heat, and set aside.

(3) When ready to prepare your chicken pre-heat oven to 325 degrees.

(4) Mix your flour, paprika, and salt in a large plate set aside.

(5) Heat a large frying pan with about 1 stick butter (if you must margarine I suppose) and dust the chicken in flour and shake off excess then brown on both sides, in batches. 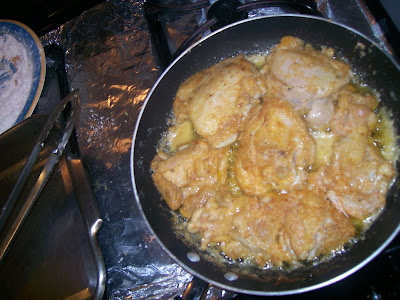 When all your chicken is browned, throw your BBQ sauce in the pan and de-glaze with the sauce, 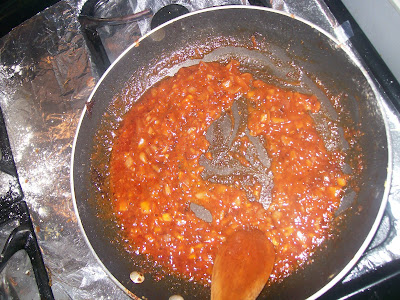 coat the chicken in the sauce. 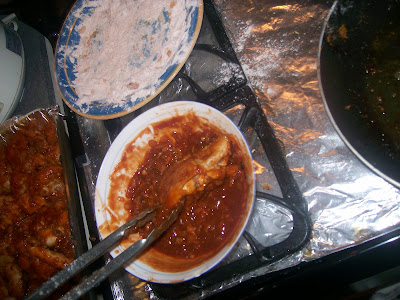 (6) Transfer to a baking dish, pour any leftover sauce over, 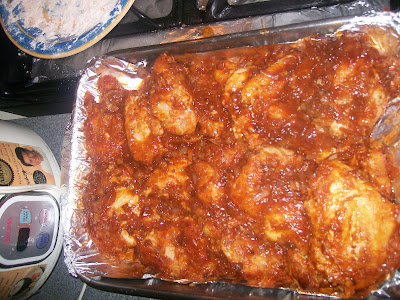 and cover with aluminum foil, bake for 1 hour and 15 minutes in oven at 325 degrees, then uncover and raise heat to 400 and cook an additional 10- 15 minutes until a browned color is achieved on top :) Remove from oven and serve. 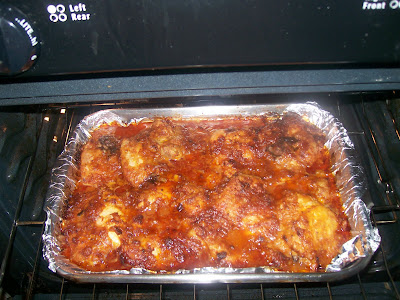 PLEASE NOTE:
(1) If done in the oven like how I mentioned you get a thick glaze on it, however if you do not want to use the oven and still get delicious results your other option is to after browning the chicken in batches, throw it all in a pot, along with the sauce, add a bit more water, bring to a boil and cover to simmer on low for about 45 minutes until tender :)
(2) There is another dish many Cubans call "Pollo en Salsa Barbacoa" but it is prepared completely different and does have a different taste. And is extremely quick, simple, and is done stove-top. Only has 3 ingredients including the chicken LOL. if you don't count some water, I'll share it next time. Stay tuned, never have made it before but from the list of ingredients it's bound to be delicious :)

(3) Still no new camera so sorry for the photos
Posted by Nathan at 1:51 PM 7 comments: