My mother makes very delicious "Carnitas Michoacanas" "Michoacanas" means from "Michoacan, Mexico" it's a very simple yet delicious meat dish, it is chunks of pork meat strongly seasoned with salt and black pepper, simmered in 1/2 pork fat 1/2 water, once the water evaporates it fries and browns in the fat then beer is added to deglaze and when it evaporates you fry them a little longer then they are ready.

It is simple and delicious. I asked my mother how she learned to make them, she said that when they lived in Michoacan, Mexico that her neighbor had many pigs and she would always call them and her siblings to go help slaughter the pig, clean and cook it. The lady would have these huge shallow wok looking pans called "Cazo's" and would simmer the pork meat in water and lard until the water was gone and everything was fried there my mom said it would be huge you could fry whole pork shoulders and people would throw in fatty cuts of pork belly etc. to make "Chicharrones" just a medley of tasty fried pork and fat.

All the rendered delicious pork fat would be strongly seasoned, once used it would be strained through a type of cheese cloth and stored in jars, you can cook any Mexican dish with that fat it lends great flavor.


Lard get's a bad reputation, but a good quality NOT hydrogenated lard is nothing to be afraid of, go educate yourself about fats the American media and pharma have really advertised strongly against this stuff but guess what Americans now are fatter than ever and have a higher heart-disease rate than many other's hmmm... wonder why they support hydrogenated fats like Margarines and Shortenings... just so ya'll know read labels even if it say's trans-fat free if the ingredients have the word hydrogenated it's THERE they can legally round anything that is less than 0.5 grams to 0 grams a lot of American margarines and stuff have about 0.2-0.4 grams per tablespoon those little grams add up... also just about every processed food in USA and some places uses "partially hydrogenated soybean and corn oils, etc. ...." ... oh and don't get me started on "high-fructose corn syrup" all this they forget to mention to support the corn and soy industries did anyone see that rediculous commercial funded by the corn refineries? It's retarded... and what's up with people thinking "Vegetable Oil" is healthy? Cuz it's vegetables? Guess what ALL plant based oils are considered "vegetable oils" when you buy vegetable oil it can be any type of oil the manufacturer wants to put in there, here in USA it's usually "Soybean Oil" or whatever oil is cheapest at the market currently or there is excess of...

Here is a nice informative topic on fats:

You can research other stuff on the effects of certain fatty acids. I gaurantee you will never find a studty PROVING saturated fats clog you up, or give you a heart attack... I could write a whole essay several pages long on his type of stuff but I don't want to bore any of my fellow foodies :)

Directions:
(1)Wash pork really by putting in a large bowl rinsing and draining several times! (In my house when washing meat we squeeze limes over the meat add salt and scrub it then rinse and drain again to clean it really well) 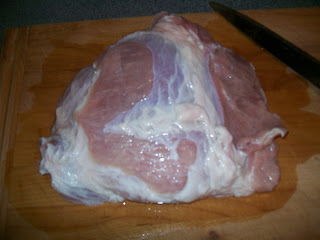 (2)Now cut pork into 2 inch cubes DO NOT REMOVE FAT! Trust me. 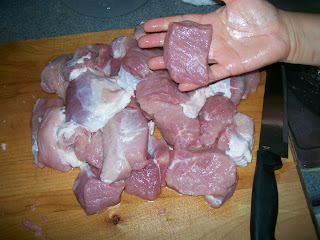 (3)Heat a large shallow pan (we used a wok), and add 1 cup water and 1 cup lard, stir until it's incorporated, add pork meat, salt, and pepper, stir gently. On high heat let it come to a boil, now cover and boil meat for 15 minutes covered on medium heat. 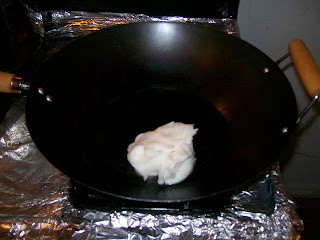 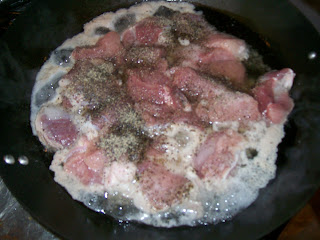 (4)After 15 minutes stir, higher to medium high heat and let it boil for an additional 30-40 minutes uncovered stirring occasionally until all the water evaporates. 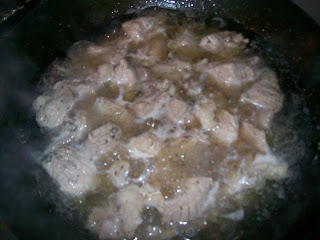 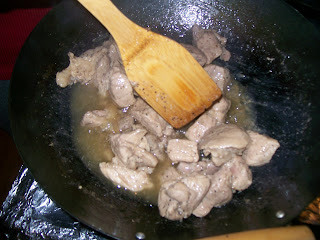 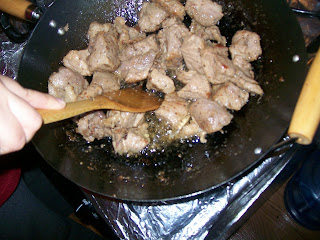 (5)Now stir every 5 minutes carefully for about an additional 15- 20 minutes on medium high heat, until meat is golden brown on all sides. 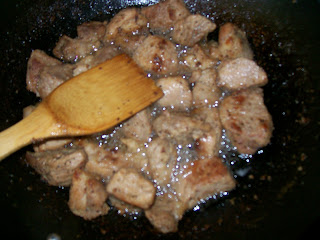 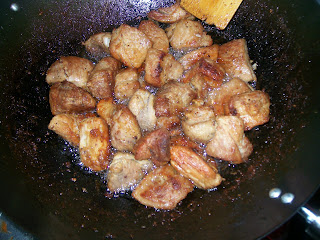 (6)Add beer carefully about 1 cup and it will bubble and sizzle, gently with a wooden spoon slide it around carefully to not let pork stick and to deglaze the whole pan. Wait until all the beer evaporates and keep frying the pork until browned nicely, when browned strongly and they have a rich golden dark reddish sort of brown they are ready to be taken out and let it drain on paper bags or towels, cover with aluminum foil to keep warm. 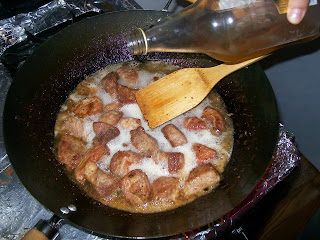 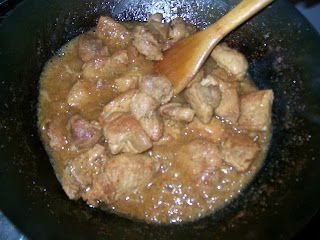 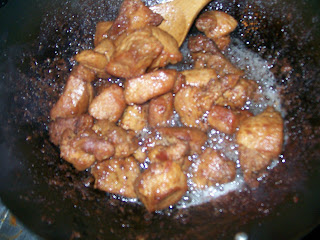 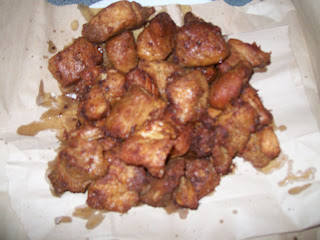 The rest is OPTIONAL in my home in the drippings of ANY pan-fried or fried meat dish we like to sautee onions and serve them as a side dish:
(7)Turn off heat, drain some of the fat through a strainer BUT leave some, heat pan on medium high and sautee about 2 large onions julienned until they turn limp and sweeter, deglaze with freshly squeezed lime juice. 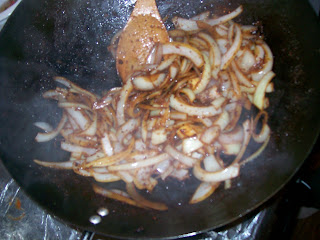 (8)Serve with fresh corn tortillas, a nice hot sauce, and some lime wedges and caramelized onions.... maybe Guacamole or Pico de Gallo" (minced tomato, onion, chili pepper, and cilantro tossed with lime juice and salt) however in my house we ate it sort of NOT traditional way... it's the Cuban influence in me I'm addicted to rice.... I had the "carnitas" with the onions over it, with white rice on the side and a bowl of "Potaje de Frijoles Colorados" (red bean stew) which I made meatless this time because we where eating pork and for dessert sinful me just ate sweetened condensed milk out of the can with a big spoon...

NOTE:
This method of cooking meat can be used also on thick cut pork chops with the fat on or pork ribs, but it is no longer called "Carnitas" after this it'll be just called "Chuletas de Puerco" (Pork Chops) or "Costillas de Puerco" (Pork Ribs) my mother likes to sometimes get any fried pork using this method, then sets them aside, drains out some of the fat leaves a little and she will add back the pork and throw a huge bowl of the homemade hot sauces we have in our house usually "Salsa de Chile de Arbol" or "Salsa Verde" she will deglaze with it and serve the meat in the boiling spicy sauce. We love it. Or she will make a special "Salsa de Chile Colorado" that is very mild the which is the same sauce used to make "Chilaquiles" and "Carne de Res en Chile Colorado"

Most of the time we don't make this dish we just felt like it today, sense we have a lot of stores that cater to Mexicans that sell these fried meats fresh made and hot. What we did at home is a very small portion compared to the huge bubbling pots in the eateries.

I know the recipe is very time consuming but it is very easy to do, you just leave it there for most of the cooking time and towards the end just check it occasionally and stir, just multi-task you can do that while doing other things in the house, or relax enjoy a cold beer or other alcoholic beverage of choice, watch TV while doing this, or read, etc. (but be sure to keep an eye on the clock)

P.S. I really shouldn't be given credit it was my mom doing most of the cooking, I just took pictures, observed, helped a bit, and ate it :)
Posted by Nathan at 4:20 PM 6 comments: