This is a very simple and delicious way to prepare chayote, I learned this recipe from my long time friend Steve's mother (Marta). Now Marta isn't much of a cook nor does she enjoy cooking, I remember very well growing up she'd get a lot of delicious food catered (yummm Salvadorian treats like Pupusas and such) or just fast food or ordered pizza, and sometimes on rare occasions she may cook. Of course being a latin woman she knows some basic stuff like cooking "Arroz Con Leche", red rice, beans, a couple meat dishes and quick simple sautee's here and there but hardly made them.

But Steve told me that recently she started cooking a bit more and being more experimental in the kitchen, truth be told on a Tuesday afternoon last week I was around and she made a very simple "Guiso de Chayote" to which she told me you could add meat to if desired. I'm assuming if done with meat it can take the place of vegetable and meat side dishes in a meal and stand alone if eatin with rice or tortillas and maybe some beans.

Couple day's later I made it with some browned cubed pork and mmmm.... it was delicious and simple :D I am glad I learned this dish because we usually at home didn't know what to do with Chayote besides soups and steaming it with mojo at home. 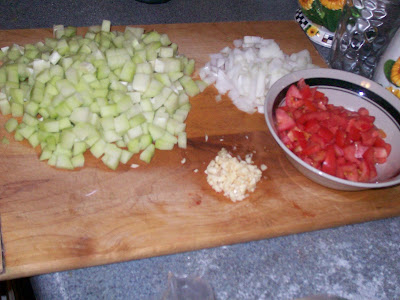 Directions:
(1) Brown meat in oil on medium high heat with salt and pepper. If not using meat skip this step. 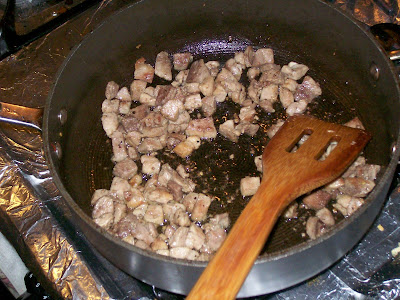 (2) Now add onion to sautee in oil until translucent and slightly browned, add garlic until fragrant then tomato and give a few stirs, throw in chayote, season with salt and cover to simmer about 10-15 minutes. 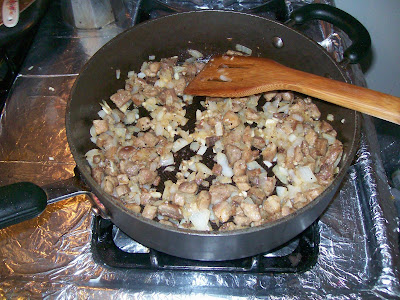 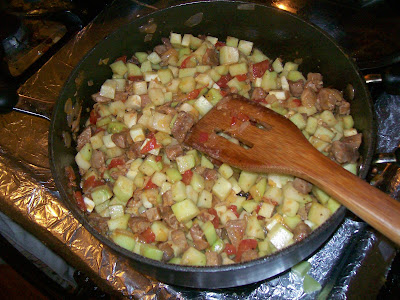 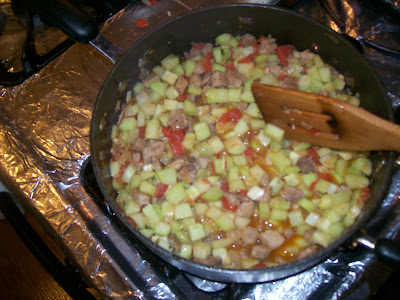 I'm labeling at Salvadorian for navigation purposes and because Marta is Salvadorian.
Posted by Nathan at 6:41 PM 3 comments:

Your probably wondering why I referred to this dish as "Spanish Style Curry" well I saw a recipe for this type of curried chicken at Pilar Lechuza's blog, "La Cocina de Lechuza", and based on the many comments from fellow Spaniards it seemed to be a favorite dish, I read many of the variations some commentors had to say. The commonality between all of them was they used garlic, onions, chicken, salt, half and half, and curry powder (Pilars recipe only uses that and is the most basic).

Living in Southern California with so many cultures I've had many types of curries (Veitnamese, Indian, Thai, Japanese, and even the Mexican Mole sauces pronounced mol- ay are in a way a type of curry each of these cultures has their own distinct way of preparing it with many variations.

Pilar's recipe appealed to me for it's simplicity, I used her recipe as a guide line but used my own proportions and added 1 heaping teaspoonful of delicious sweet smoked Spanish paprika. 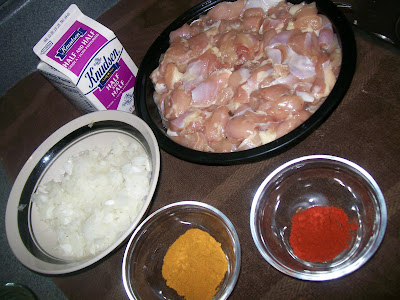 Directions:
(1) Firstly, cube chicken meat into 1 1/2 inch pieces, season with salt to taste, and mix well with all the garlic, set aside to let marinade while you prep everything, or if your in a hurry start browning the chicken. Heat olive oil on medium high heat (high but not super high) and when oil is how brown chicken. After chicken is browned (maybe 10 minutes) set aside. 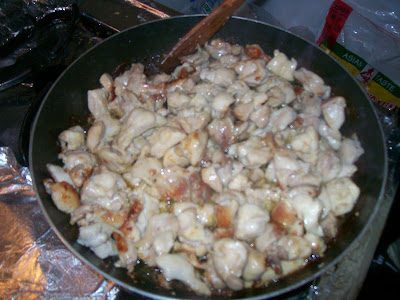 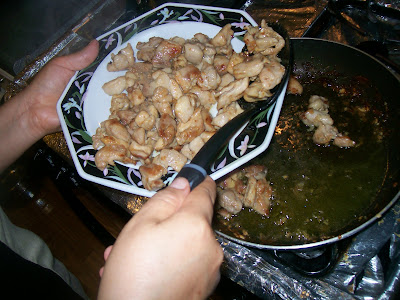 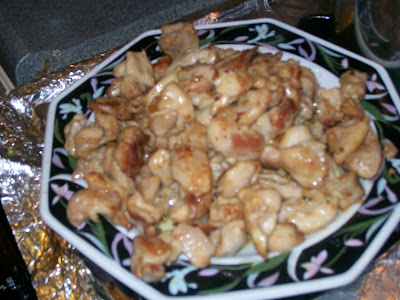 (2) In the pan drippings, sautee onions until translucent (maybe 6 minutes), add chicken back, throw in curry powder and paprika, stir until the spices are fragrant. Then add half and half, more salt to taste if necessary and incorporate well, when mixture comes to a boil turn off heat your done. 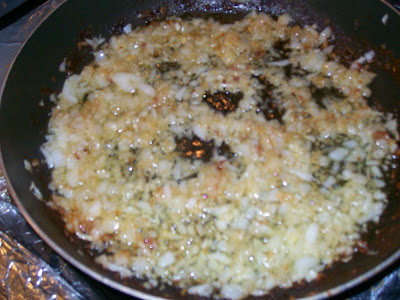 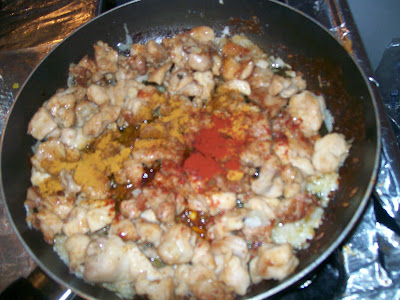 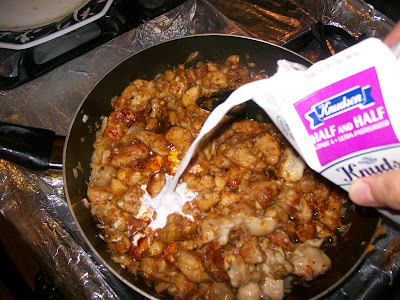 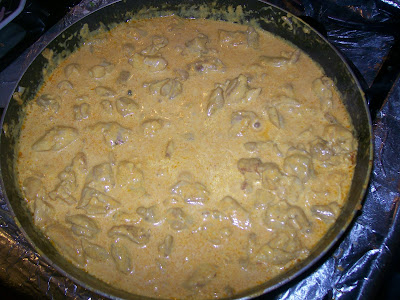 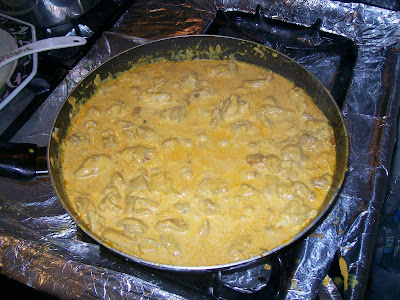 (3) Serve with fluffy white rice. Pilar serves it with some rice that she prepares my heating some olive oil, sauteeing some garlic, adding rice then chicken broth. ( I think)

Note:
This dish is very very fatty and rich so be warned if your paranoid of fat. I'm not.
Posted by Nathan at 12:06 PM 6 comments:

This recipe is not from my Tata, it is actually my mother's (yes she's Mexican) the recipe comes from my grandmother from my mother's side, my mom in Mexico remembers her mother always making the basic "Tortilla de Patatas" which is just eggs, potato, onions, and salt. Sometimes though she remembers my grandmother adding ham to it which is optional, and my mother being a lover of garlic just as much as me also adds garlic to it which is optional.

I know you guys would expect the recipe to come from my Tata since it's Spanish, but it happened to come from my mother, who knows maybe this recipe got passed from my mother's great great grandparents whom where from Spain, although the simple "Tortilla de Patatas" is common or known in some Mexican households and families as well.

Directions:
(1) Heat cooking oil enough to pan-fry/ deep-fry cubed potatoes, when oil is hot enough (test it with a wooden spoon if it bubbles around it's ready). Add your potatoes and fry them this may take 20 minutes, meanwhile you can prep everything while the potatoes fry. When potatoes are done set aside in a plate with paper towel on bottom, very lightly salt them. 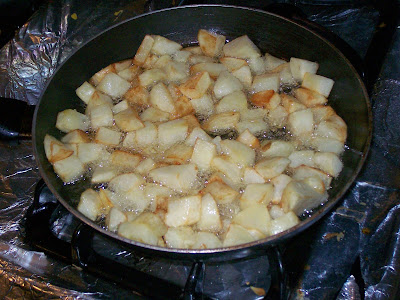 (2)Heat oil on medium high heat brown ham slightly and sautee onions until tender and translucent about 5-7 minutes, then add garlic and cook another 2 minutes. 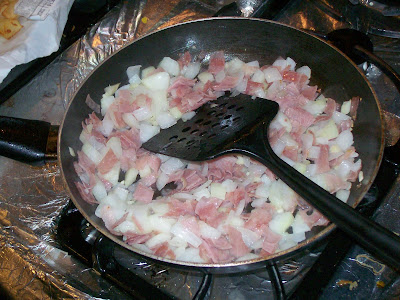 (3)Transfer sautee of onions, garlic, and ham into a large bowl and add beaten eggs and fold everything well until incorporated, add salt to taste. 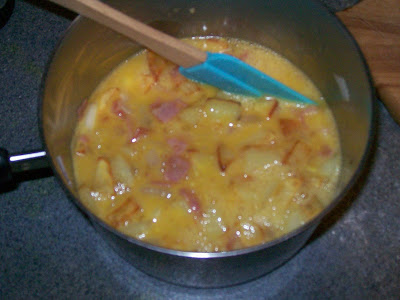 (4)Now heat oil in a large pan on medium high, not a lot just enough to lightly coat, add the egg mixture, don't touch it, gently push around a little every time the egg slightly cooks to allow it to cook sort of evenly, be patient, push in sides gently try to let the egg kinda flow and slowly cook but don't break into it, then set heat on medium and cover with a large plate, let it cook on medium to medium low for about 6-7 minutes, uncover, see if it settled a bit and is more firm but not fully cooked it so now do the following. 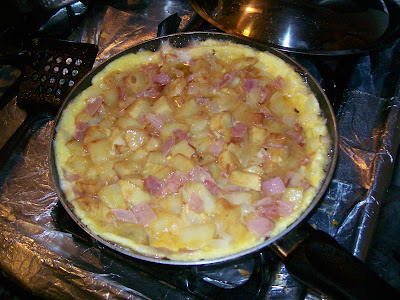 (6)Turn off heat, place plate over it, use a large towel to hole the plate onto the pan and grab the pan, flip it over so you flip the omelet on one side, now turn pan back on lightly oil with extra-virgin olive oil, gently slide it back in slowly, shake the pan a bit not the omelet, cover for 5 more minutes to fully cook on other side. 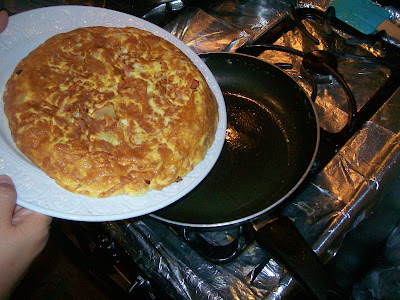 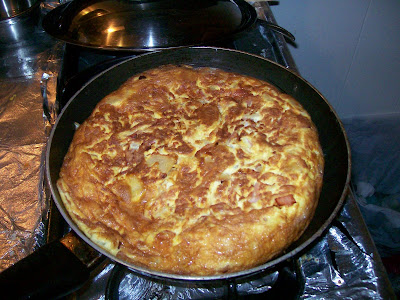 (7)Turn of heat, clean the large plate you used, now use it again to flip the omelet into it, or if your scared you can simple leave it in the pan and slice it and get it from there if your scared you'll break it, we never break it though it's experience ha ha. 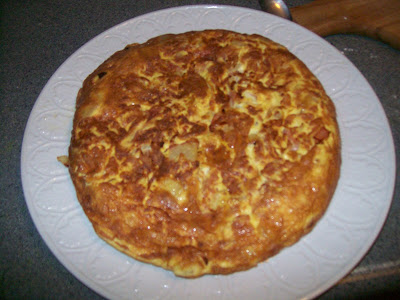 (8)Serve by cutting big cake like slices and serve, in my household it can stand alone it doesn't need any side dishes. It can be eaten for breakfast, lunch, dinner, whenever, hot, cold, room temperature, as a side or as a main dish, even cut into little squares for appetizers. It's all up to you.

P.S.
The garlic is optional, but everything is better with garlic, the ham is optional to, but I love biting into the salty ham.

If interested in my Tata's version I already posted it in my blog which is as Nuria told me, a combination of "Tortilla a la paisana + Tortilla de chorizo and Tortilla Española"

Awhile back my mother bought some beautiful beef shanks, this cut of beef lends itself well, it's meaty, marbled, has bone, and marrow which makes very flavorful rich stews and soups, especially if the marrow cooks into the stew or soup.

We had it in the fridge for awhile, but lately my mom had been craving it in a typical tomato based sauce with carrots and potatoes accompanied by some fluffy white rice maybe a salad and if you have the stomach and space some black bean soup. So one morning we decided to just cook dinner in advance so we could take that of our hands for the rest of the day.

My mother was thinking of preparing it the same way my grandmother makes "Carne Con Papa" (Cuban Beef and Potato Stew), but I was in the mood with something of a more Spanish flavor, more specifically the wonderful smell and taste of "Pimienton Dulce de la Vera" (sweet smoked spanish paprika from La Vera) the wonderful spice that makes Spanish chorizo so delicious which is much more flavorful and robust than the bland American paprika. (do not subsitute this paprika for the American one it will not be the same)

So we ended up deciding to make my grandmother's recipe for "Carne Con Papa" just using beef shank instead, as well as seasoning it differently (instead of using bay leaves, cumin we used sweet smoked spanish paprika and black pepper) and let me tell you the results did not dissappoint. It was a hit :)

The recipe was also inspired by this recipe of "Pollo en Salsa" from Monica and her blog Secretos de Cocina, Enyesques y Algo más whom resides in Canary Islands, whom gave me the idea of seasoning braised meats with salt, paprika, and black pepper as well.

Directions:
(1) Heat a large metal pot WITHOUT ANY OIL until it's really hot on very high heat, to see if it's hot just sprinkle some water and if the water dances or instantly disappears it's ready, add the meat it should make like a screaming noise from the high heat, not a sizzle but a thunder like sound, do not move the meat let it brown for 5 minutes un-touched in one side, then flip it quickly to brown on other side. Set aside 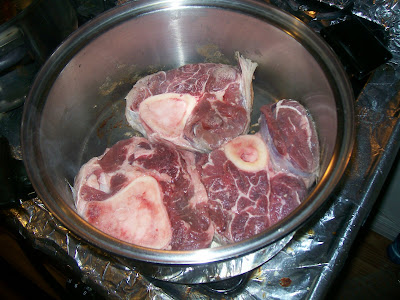 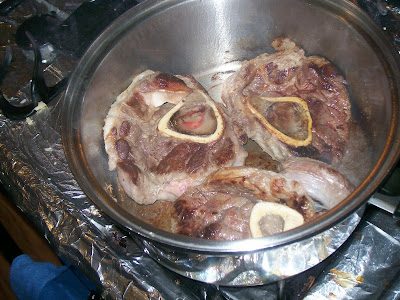 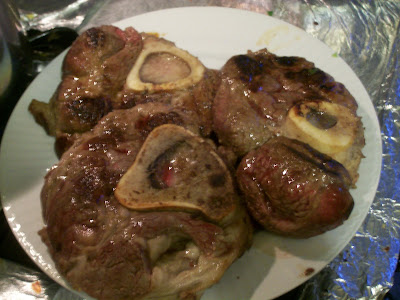 (2) You want the pan should have a blackish browning on the pan, this is gonna lend the dish great strong beefy smokey flavor.

(3) Lower heat to medium high and wait a little, add your extra-virgin olive oil and immediately add your onions and bell pepper diced up, sautee for about 6 minutes until translucent scrape with a wooden spoon to pick up drippings, add garlic sautee 1 minute until you can smell the garlic. 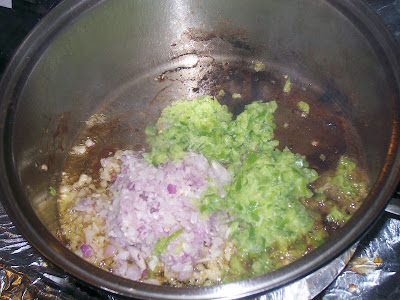 (4) Add red wine, bring heat back to high and scrape to deglaze with further with a wooden spoon, add tomato sauce bring to boil, now add water to dilute sauce, add salt to taste, black pepper, and tablespoon of sweet smoked spanish paprika bring to a boil again, add the meat back spoon some of the sauce over and cover then lower heat to medium low to simmer. Cook until meat is tender about 1 hour to 1 hour and 30 minutes. 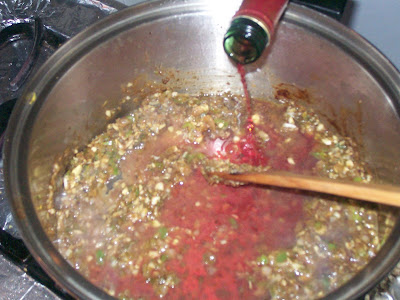 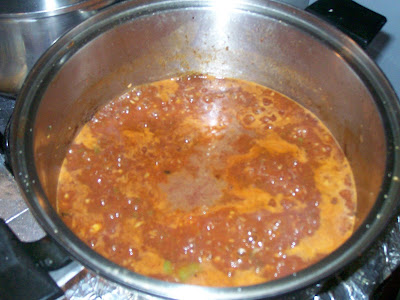 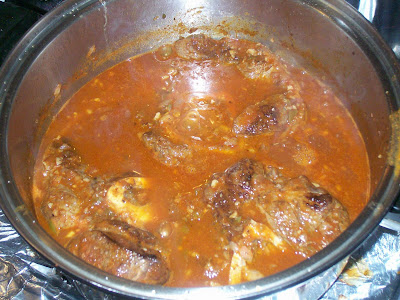 (5) Add the potatoes and carrot afterwards and cook maybe another 30 minutes or more to get the potatoes tender as well as the carrots. 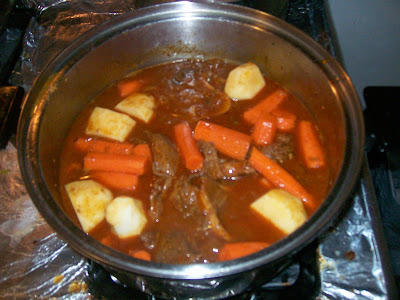 (6) Garnish with fresh cilantro to add some freshness and lighten up the dish. 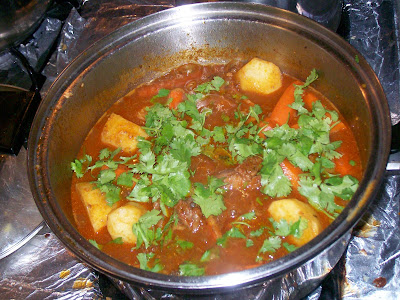 P.S.
You can buy the sweet smoked Spanish paprika from "La Tienda" (I have the banner on top of my page click on it if you want to check it out) or if your lucky buy it from a store near you if available locally.