Bacan is the tamal made in Baracoa, Cuba. My grandmother calls them "Tamales del Oriente" because the eastern provinces of Cuba are known as "El Oriente" people from those area's have a different style of cooking and eating. They are more heavely African influenced, and native Taino influenced and influenced also a bit by Haitian cooking due to mass migration from Haiti during the Haitian Revolution. They have a type of flat bread made from Yuca which I have never tried in my life, they use allspice (I read that somewhere) and some things have coconut milk and are just different.

Cooking from Western Cuba is more Spanish influenced, by Catalan and Galician cooking as well as Canary Islands, with small hints of African, Chinese, French, Taino, etc. In it's core it's Spanish Cuisine adopted to use the ingredients available in the Island as well as using imports from Spain.

These Tamales are different from the typical Cuban tamale because the dough is made from green plantains, stuffed with pork, and wrapped in Banana Leaves then boiled. They have a strong perfume like scent, and a flavor that is unique on it's own.

Typical Cuban Tamales are made from a corn based dough, and the pork is mixed into the dough then wrapped in either corn husks or banana leaves.

I adapted this recipe that comes from a book called "Taste of Cuba" I altered it a bit because I found issues with a lot of the procedures, firstly the procedure I changed was the way they prepare the banana leaves because they boil it in water that will make the leaves sort of fall apart and not be to workable. I have made before Salvadorian Tamales that use Banana Leaves, the way to make them workable is to pass them through a flame and they turn maleable and dark green then wipe with a damp cloth. Then the other change was I added cumin to the stuffing because some Cuban things just need cumin. I also changed the measurements.

Ingredients for filling
-1 lbs. pork stew meat washed and chopped into really small pieces
-1/2 green bell pepper minced
-1/2 onion minced
-4 cloves garlic mashed to a paste
-1 tomato (seeded, and skinned then chopped, to do this boil tomato in water 1-2 minutes, then peel, cut in half and scoop out seeds)
-salt to taste
-1 teaspoon ground cumin

Needed for wrapping:
-1/2 pound banana leaves cut into 7 by 10 rectangle squares 12 pieces and other 12 into 8 by 10 (don't worry to much about exact proportion)
-string to tie them up

Directions for pork:
(1)Heat a pan on high heat till hot, then lower to medium high, add olive oil and heat a bit, then add pork in one layer season with some salt and don't touch until it starts browing and juices evaporate then stir and let it brown some more, about 10 minutes. 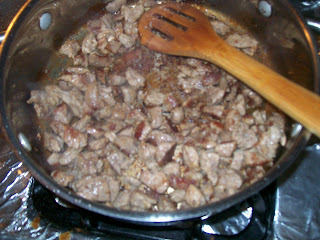 (2)Add a little more oil and sautee onion and bell pepper for 5 minutes, then add garlic and sautee 1 minute, add tomato stir well to deglaze and crush tomatoes and cumin with a wooden spoon, cook 5 minutes on medium low, then raise heat again to high to bring to a bubble then stir cover for 10 minutes. Remove from heat the filling is done.

Directions for dough:
(1)Peel green plantains carefully by making incesion with knide straight down then removing peel. Grate in the finest grater, mix with coconut milk, bijol, garlic, salt, and pepper then put in a food processor to get a very smooth dough. Set aside. 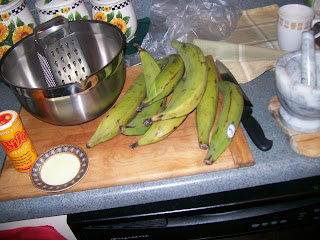 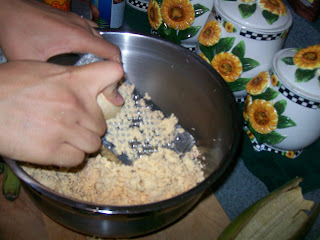 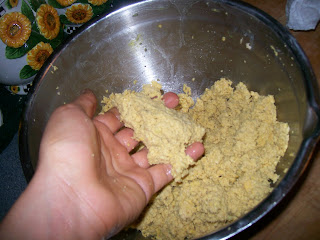 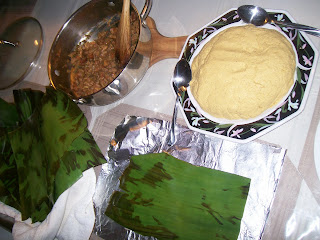 (1)The cut plantain leaves should be through your burner on medium high heat, until it turns a deeper green. IT WILL NOT BURN! TRUST ME! Then set aside and wipe with a damp cloth. 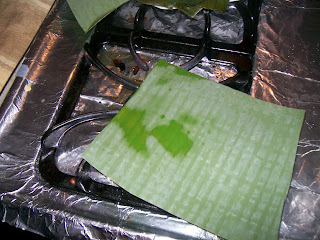 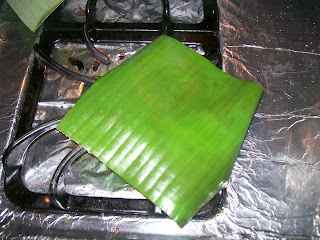 (2)Cut string into long strings use your head. If you don't have string feel free to use aluminum foil to seal them tighter and more "water proof" (I didn't even if my mom insisted)

(3)Lay 2 leaves in shape of cross, add two HEAPING tablespoonsfuls of dough, flatten a bit into round shape, add 1 tablespoon of filling in a roundish line. Fold leaves over to form "rectangular shape" and tie with string. 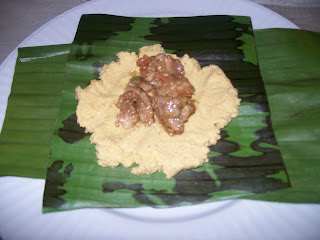 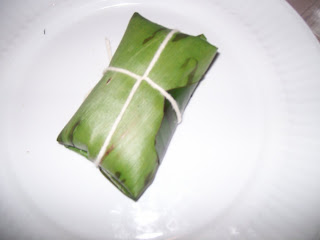 (4)Add to a pot of boiling water to steam, cover and cook atleast 30 minutes, Drain well and ready to eat! 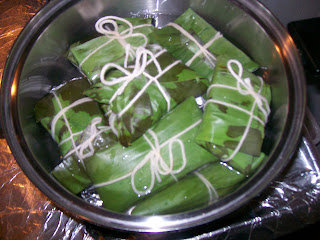 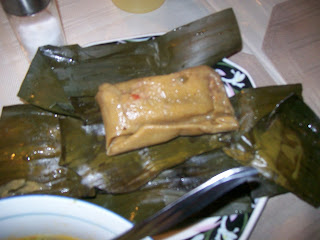 P.S.
You can also just mix the meat into the plantain dough, so the dough is flecked with pork pieces, you just add the pile of dough and wrap.
Posted by Nathan at 12:48 PM 4 comments: