This is my version of "Caldo Gallego" (Galician Stew) which is a popular bean stew cooked in the Northwestern region of Spain called "Galicia" It's not the authentic stew, but it's the version that I like best (and yes I will say for me it tastes better than the authentic ha ha sorry for any fellow Spaniards who are Galician reading this lol)

What makes my version different? Mine is a bowl of steaming hot beans with shredded beef, smokey dry cured slices of Spanish chorizo, and thin sliced savory salt pork pieces married with swiss chard and spiced with the fragrance and taste of sweet smoked Spanish paprika the signature spice of Spain :) and yes I just couldn't help but make a Cuban sofrito, minus the tomato (I don't know just felt like leaving it out)

If interested in cooking the authentic traditional one check out "Pilar Lechuza's" blog post for "Pilar Lechuza's Caldo Gallego" which is very very simple, basically it's just white beans boiled with meat usually salt pork, pork ribs etc.), spanish sausage, cooked with a chunk of preserved salted pork fat (I have no idea where to buy that here) then when everything is tender you add potatoes and turnip greens then salt to taste. Nothing more nothing less, very tasty and simple.

But I this is the version I really love :) I love the shredded beef in it, and boiling the flank steak for a long time with the beans it gives it a real good taste

Ingredients:
-2 cups dried large white beans (like cannelloni)
-1 1/2-2 lbs flank steak
-1/2 of a square of salt pork (or a couple strips of bacon) 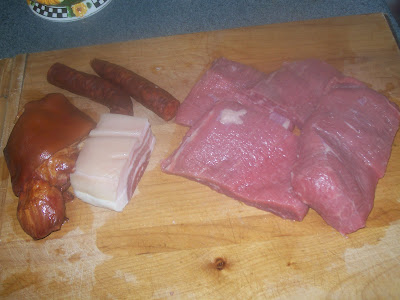 -2 large bunches of swiss chard stems removed, washed well, and stack and roll them then cut them into strips or pieces 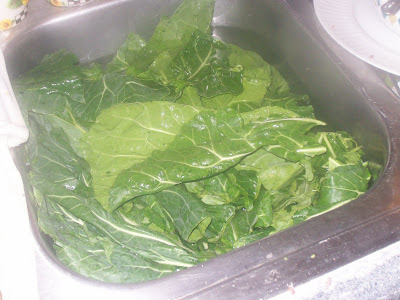 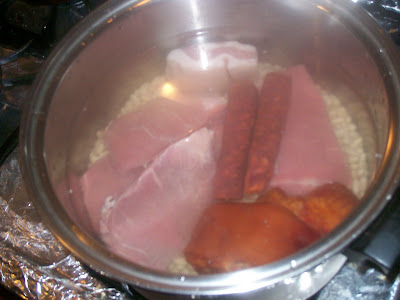 bring to a rolling boil uncovered and skim off any scum. 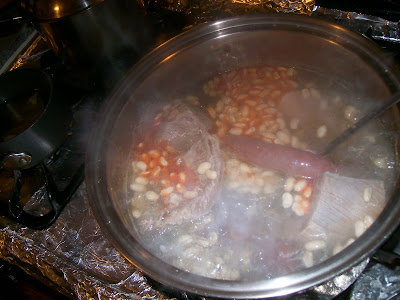 (2) Cover and allow to simmer 2 hours maybe up to 3, it depends on how fast your beans cook (time varies based on how old the beans are or where you bought them) When tender and everything your pot will look like this. The red oil that forms on the top is from the Spanish Chorizo that was heavily infused with sweet smoked spanish paprika. (3) Start making your sofrito, heat a frying pan with extra virgin olive oil on medium high, and sautee the onions and green bell peppers until translucent, add garlic and cook until fragrant, lower heat to low stir in 1 tablespoon of sweet smoked spanish paprika, and remove from heat. Add this sautee to your pot of beans and stir.

(4) Remove all the meats and sausage from the beans, and add your potatoes and swiss chard cook an additional 20-30 minutes until potatoes are tender together with swiss chard. 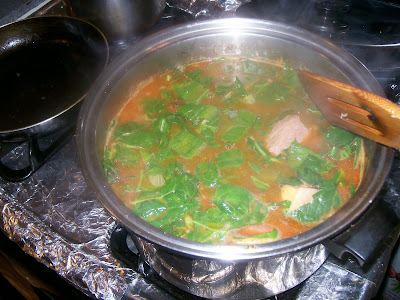 (5) Meanwhile the flank steak you removed, shred it by hand or with a fork when cool enough to handle, slice the spanish chorizo, slice your salt pork, remove meat from ham hock and you can even keep the skin if you like it. 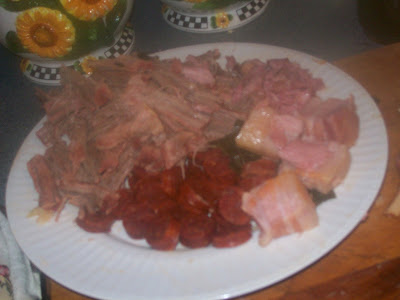 (6) When potatoes are tender, add all the cut meats back to the pot of beans, taste for salt, add some if necessary, bring to a rolling boil and turn of heat you are done :) Serve with rice or bread. 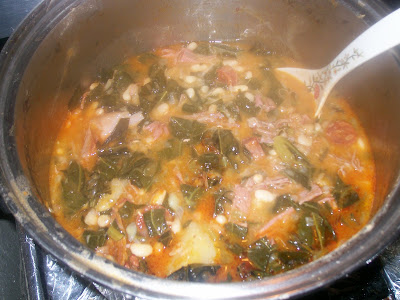 I didn't cook this today but I was inspired to post it because I was reading one of my favorite blogs lately "Cuban in the Midwest" (seriously she posted some amazing stuff she posted some wicked good stuff this week, her version of "Potaje de Garbanzos" which I approve lol. and some "Mejillones al Ajillo" and these fried pork chops that have a type of "rosemary mojo sauce" which is like a cuban garlic citrus sauce she infused with rosemary.) all of which I will cook eventually.) anyways what inspired me to post this was her blog post titled "Posts that Never Made It" I have plenty of those, just pictures of recipes you've cooked and food you make but somehow they get lost or you forget and I remembered I had some pictures of my version of "Caldo Gallego" and so here it is today, I also posted it because "I.M." requested it, so this is for you girl :)

Cough cough please note if you have not tried sweet smoked Spanish paprika before you are truly missing out, you need to try it. And any Cuban who's NEVER had it, you are truly truly missing out, I guarantee if your Cuban this will become your favorite spice, you know how most of us love Spanish Chorizo... well the reason we love it is because it's heavily spiced with sweet smoked Spanish paprika, it's what makes Spanish Chorizo taste like Spanish chorizo, and anything you add this too will remind you of it, and give it that special taste. I know it use to be real hard to get a hold of, but lately I've seen it at Costco under the McCormick brand and some specialty stores. You can order it online from "La Tienda" as well (see the banner on top of my blog you can buy it from them, click on it and purchase lol) I however am lucky enough to have a good blogging buddy from Spain send me bags of the sweet smoked Spanish paprika straight from Spain and straight from "La Vera" region at that :)
Posted by Nathan at 10:15 PM

Nathan, thank you so much for posting this and especially for the kind words of my blog. I am going to write the list of ingredients for the Caldo Gallego. Hopefully I can find everything I need here. I will be making it soon. The temperatures are already starting to drop and it will be very comforting on a cold night. Thanks again. A hug for you!

Looks muy bueno Nathan! And so does your blog - like the new styling. Also wanted to thank you for introduction to Cuban in Midwest. I didn't know her blog.

Funny Nathan...In Cuba a lot of cooks would modify Galicia's caldo gallego by throwing in more stuff, and would say it was 'caldo gallego con todos los hierros'...implying that the original one was weak...but it was all in good fun, as in Havana both versions were often cooked, and because so many people had Galician parents or grandparents. We would have it during winter, but also during summer, just like other bean stews.

I.M.
I know you might have a hard time getting sweet smoked spanish paprika, if you do make the stew and replace the sweet smoked spanish paprika with "cumin" and color the stew with some "bijol" I know cumin and bijol taste very very different from the Spanish Paprika and aren't substitutes but you will get a very delicious stew using them in here in case you can't get ahold of the other :)

Mamey,
I missed reading your comments LOL. you always have real informative stuff to share. I love teh "Caldo Gallego con todos los hierros" ha ha. If I ever get ahold of "unto gallego" I will make the simpler original one.

Galicia is in northwestern but the recipe looks good. :-)

Anonymous,
Haha thanks for the correction I just edited it lol. (yeah I know right I was writing this really late night)